By Maria Saporta and Amy Wenk
As published in the Atlanta Business Chronicle on October 23, 2015.

Two years after adding a Ferris wheel to the city’s skyline, the owners of SkyView Atlanta look to bring thrills to downtown.

SkyTower will be the first standalone amusement ride to be developed in the heart of a major U.S. city.

It will feature three rides:

* SkyShot, a slingshot ride that will fling two people high into the air, with the option of free falling or somersaulting back down;

* SkyTwist, a glass gondola for up to 20 people that will slowly ascend in a cork screw motion for 360-degree views of the city. 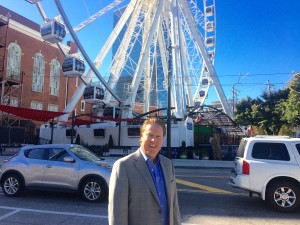 Todd Schneider, co-owner of SkyView, stands in front of the Ferris wheel that has changed the look of downtown (Photo by Maria Saporta)

“There’s nothing like this in a downtown urban setting,” Schneider said. “We think that the ride is significant enough for thrill seekers that there will be interest in other parts of the world. This is going to be something special for Atlanta.”

Plans for the new ride currently are being submitted in Atlanta. Pending city approval, construction could start in January 2016, with the goal of opening in early June 2016. The $5 million project will generate about 50 jobs for the city.

To develop the ride, the SkyView owners have entered into a first-ever joint venture with Utah-based amusement ride inventor Stan Checketts. The 74-year-old is behind such attractions as “Big Shot” on top of the Stratosphere in Las Vegas, the world’s highest amusement ride. 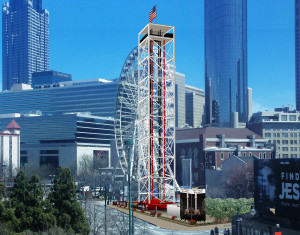 A rendering of the new SkyTower, which will include three new rides (Special: SkyView)

“He’s a living legend,” Schneider said. “He’s an inventor and a pioneer in the thrill ride world. Over 1 billion people have ridden Stan’s rides. Stan created this combination of thrill rides in a vertical format.”

Other cities such as Las Vegas and Orlando were vying for the ride, but Atlanta ultimately won out.

“We love the business climate down here,” Schneider said. “You can see and feel the growth. There’s a can-do attitude. We love how the community has embraced the change in the skyline.”

The hope is SkyTower increases attendance by 200,000 people per year. The Ferris wheel already attracts about 465,000 annual visitors.

Its operators see the attractions as equally compelling for locals and visitors. 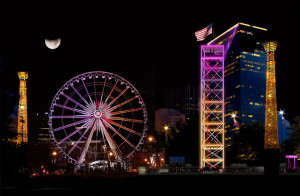 “We are trying to spark people living out in the suburbs to come to the downtown area and experience this,” Schneider said.

Local leaders see the new ride as a boon for the entertainment and tourism hub that’s been building around Centennial Olympic Park. From July 2013 to June 2014, the park saw an estimated 2.23 million visitors, according to the Atlanta Convention & Visitors Bureau (ACVB).

“I think Centennial Olympic Park has really become a natural starting point for people to start their journey exploring Atlanta,” said William Pate, president and CEO of ACVB. “This is the next evolution of that.”

He added SkyTower is a great addition to the portfolio of attractions downtown, filling the need for more “impulse-type” purchases for people who are already downtown for sporting events or conventions.

Atlanta City Councilman Kwanza Hall, whose district includes downtown, said he’s been pleased with the owners of SkyView and their investment in Atlanta.

“I’m glad I have a good working relationship with them,” Hall said, adding the Ferris wheel has added a new element to the nightlife of downtown. “It has been a beacon in the night for Centennial Olympic Park Drive. It kind of used to be dark and desolate. It really adds to our local skyline.”

SkyView Atlanta opened in 2013, and earlier this year, its owners signed a 20-year land lease to keep the attraction in Atlanta.

“The longevity of SkyView is starting to prove itself,” Schneider said. “We continue to look for other opportunities in Atlanta to enhance the experience. We are here to stay.”