Social media campaign may be energizing Gen Y’ers who don’t show up in polls, could swing outcome

A great unknown in the campaign for the transportation sales tax is the effect of the social media campaign that’s tailored for young voters – most of whom are presumed to support the tax in order to expand transit.

Traditional campaign measures may not capture these voters. It’s not even clear from the crosstabs of recent polls how voters were contacted. If pollsters used only phone calls on landlines, there’s a good chance the results don’t reflect opinions of the 20-something year olds who tend to communicate on smart phones with calls, emails, texts and Tweets. 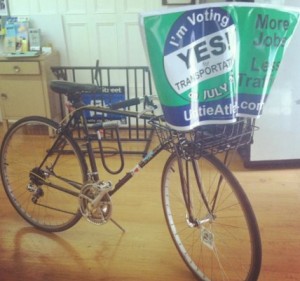 This bike sail is free and being advertised in a Twitter conversation about Metro Atlanta’s transportation sales tax campaign. Credit: http://bit.ly/Q2TbLY #TIA2012 #TSPLOST

These Generation Y voters could emerge as a significant part of any possible silent majority that will mobilize to pass the referendum. The way things look now, the vocal majority is poised to shoot the referendum down in flames, according to a July 11 poll by WSB-TV that showed support from just 33 percent of likely voters.

A more positive sense of the campaign than is evident in the polls appears on some of the Twitter pages where the tax is discussed.

The main buzz is about how shoppers this Tuesday will have a chance to participate at 12:30 p.m. in a summertime ritual: A watermelon seed spitting contest. Plus, Parsons Farms is in the news for planning  to bring products described on the market’s Facebook page as, “The last juicy peaches of the season, as well as fresh and delicious blackberries!”

A smaller buzz, but a buzz nonetheless, is that absentee ballots also will be available at the farmers market.

The ballots will appear as a courtesy of Emory University’s Office of Sustainability. Absentee ballots can be used by any voter, and there’s no need for the voter to explain why he or she can’t go to the polls to cast a ballot on election day. 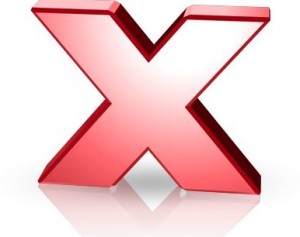 Opponents of the proposed transportation sales tax are spreading their message through social media. Credit: https://twitter.com/NoTSPLOST

The voter outreach event at the farmer’s market is likely to reach a set of voters who are completely estranged from those who were the target of a traditional media event Monday morning.

The morning event included high-ranking executives who gathered to, as the press release said: “Bring awareness to a critical transit project for the region and the Clifton Corridor.”

The project is the proposed $700 million MARTA rail line that’s to link the Emory area with MARTA’s Lindbergh Station, in Buckhead. More than 10,000 riders a day are forecast to use the route, and it is to facilitate more than 250,000 potential individuals who want to work at one of the Emory-area job centers.

The media event is part of the traditional ground game of electoral politics. The farmers market event, not so much.

In traditional practice, a media event is staged for TV cameras to set up in front of a podium, with reporters in the second row. Speakers – either politicians and civic leaders, or Joe and Jane Sixpack – talk about why voters should see things their way. 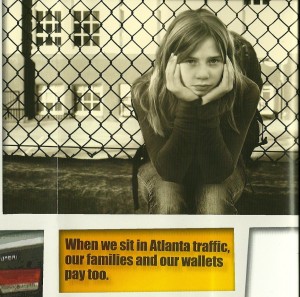 A forlorn child is a main image in a glossy brochure sent to voters by MAVEN. Credit: Metro Atlanta Voter Education Network

The idea is to create a news story that will sway opinion through the speakers’ prestige, or because voters can relate to the Everyman standing behind the microphone. Studies show that viewers give news stories more credibility than paid advertisements.

This traditional approach is the one evident in the TV ads, and the big postcards and brochures delivered to mailboxes, that urge voters to support the sales tax.

These are the messages that grab people by the collar and seem to state: “Look at this picture of traffic congestion and a child sitting alone. Now, do your part and vote yes for the sales tax.” These are not the messages that reach out to the sort of voter who uses social media to keep abreast of local events.

Opponents also are active in social media. Some of the messages are quite clear:

“ATL Chamber Of Commerce provides list of politicians who don’t support TSPLOST. Reward them with your vote! http://politicalvine.com/politicalrumor … ‪#NoTSPLOST‬” 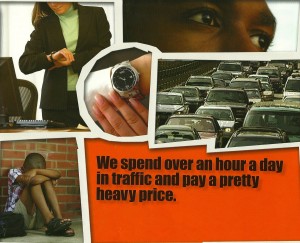 This glossy brochure emphasizes the amount of time commuters cannot spend with their families because of time spent in traffic congestion. Credit: MAVEN