Some Atlanta residents question direction of the city, fate of Fort McPherson

Anyone who wanted to discuss Atlanta’s proposed comprehensive development plan at a meeting in a church Tuesday evening in Southwest Atlanta left gravely disappointed.

The crowd of more than 60 who crowded into a meeting hall at St. Peter Missionary Baptist Church wanted to talk about issues that nag them over the kitchen table every day.

Where’s the city’s plan to attract industrial jobs? Why does Atlanta plan to use property taxes to induce development when existing building have such high vacancy rates? Who’s looking after folks at risk of losing their homes to foreclosure? 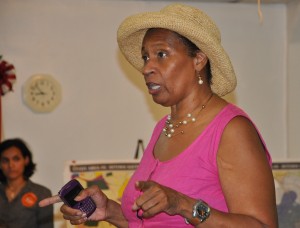 “They’re going to build the Taj Mahal in the middle of a ghetto," said Edith Labipo. Photo credit: Donita Newton

Don’t even talk about redeveloping Fort McPherson once the military vacates Sept. 15. Some of its neighbors think the city’s already cut a secret deal with developers.

“They’re going to build the Taj Mahal in the middle of a ghetto,” said Edith Labipo. “I think they’re going to push their plan down the public’s throat, and all the policies attached to it, so they get what they want.”

The crowd seemed to be made up of serious-minded people who wanted a rational discussion about their concerns. Speakers were concise and the audience was respectful.

But the issues they wanted to raise are difficult. And the crowd didn’t flinch as individuals turned a meeting that was to be a boilerplate civic event about Atlanta’s development plan into a forum to vent their concerns about the direction of the city.

They demanded answers to dilemmas from Councilwoman Joyce Sheperd and a small array of city planners:

Sheperd said the city has a new chief of economic development who, just two weeks into the job, already is stumping for business leads at an international biotech conference in Washington. In addition, the planned adoption in July of the comprehensive development plan can be pushed back until September to give more residents an opportunity to comment on it, she said.

The back-and-forth continued until Deborah Scott stepped forward. Scott is executive director of Georgia Stand-Up, a grass-roots organizing operation that has offered an alternative plan for redeveloping Fort McPherson.

“What will happen on that 488 acres will impact you,” Scott said. “This document [the Georgia Stand-Up plan] will be delivered to the Army and the congressional representatives from this area. It will travel as far as it possibly can travel.

“I think there is a time and place for community organizing, and this is the time,” Scott said. “You have to organize and support each other.”

By this point, the clock was about to strike 9 p.m., the extended closing time that Sheperd had agreed to when it became clear no one wanted to wrap up at 8:30 p.m.

Once Scott concluded, most people got up quietly and departed. Those who stayed to talk spent another 30 minutes or so clarifying their concerns and their hopes before they trickled out of the church and into the twilit evening.