Environmentalists have won a battle against a coal gasification power plant in Mississippi, but a Southern Co. unit announced plans to continue construction of that plant pending review by the state’s utilities commission.

The Mississippi Supreme Court reversed last week the approval of state permits for a coal gasification plant that’s being built at the headwaters of the Pascagoula River system. The plan is to create a 14,000-acre strip mine to extract lignite, a soft brown coal. The coal would be converted to a synthetic gas used to fuel the power plant being built at the site, according to several reports.

The court ruling in Mississippi follows two recent actions in Georgia on coal-fueled plants. One of them halted construction of a coal-fired plant in Early County. Another proposed plant, this one near Sandersville, may have been hobbled by operational changes being made by one investor. 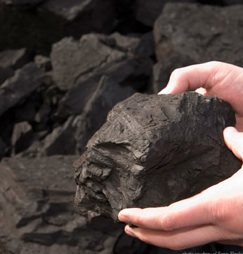 Lignite is a soft coal that Mississippi Power, a Southern Co. unit, plans to use to fuel a power plant now being built. Credit: Lignite Energy Council

In Mississippi, the state supreme court ruled 9-0 on March 15 that the state’s Public Service Commission had failed to establish that the new plant would benefit new customers, according to a report by Reuters.

The following day, Mississippi Power, the smallest of Southern Co.’s units, announced that it would continue with construction at the plant in Kemper County while awaiting review by the Mississippi PSC, according to Reuters.

“We are confident there is substantial evidence in the record to support the commission’s approval of the certificate,” said Mississippi Power spokesman Jeff Shepard in a statement cited by Reuters.

“We intend to continue construction of this facility to provide our customers with a sound energy future and unlock the facilities substantial customer benefits,” Shepard said in the statement.

The Mississippi chapter of the Sierra Club thinks differently. The group challenged the Mississippi PSC’s approval of the project.

As quoted by Reuters, the court ruling “has dealt a severe blow to the project in the sense that they (Mississippi Power) are back to square one,” said Louie Miller, state director at the Sierra Club. 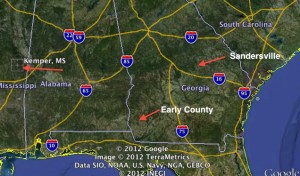 According to Reuters, the 582-megawatt plant has been awarded more than $680 million in federal grants and tax incentives, including $270 million from the U.S. Department of Energy’s clean coal power initiative. Construction costs were capped at $2.88 billion.

Lignite is a woody material that’s being used as fuel in North Dakota.

Click here to read about lignite mines and power plants on a website of the Lignite Energy Council.

An adjunct professor at Pearl River Community College, near Biloxi, has blogged extensively on the Kemper County plant and other energy issues. The page published an opposition paper that describes the project.

Click here to read the blog by Thomas Baldwin.

The Mississippi chapter of the Sierra Club has published its own white paper on the Kemper County coal gasification plant. The opening statement reads:

“The Kemper County Lignite Plant is planned to be built in the Chickasawhay flood plain, meaning that any runoff from the project will impact the Pascagoula River system.

“What Mississippi Power wants to do is dig a 100-foot hole in the ground to extract lignite, a wet, woody, low-energy coal and then burn it in a 500-megawatt plant to be built next door. 20,000 acres of prime forest land and small farms will have to be eliminated from existence in order to build this plant and dig the giant hole in the ground.

In Georgia, a developer of a planned coal-fired power plant in Early County relinquished in December its permits for the plant as part of a settlement of a lawsuit brought by environmentalists over its plant in Texas.

The fate of a proposed coal-fired plant near Sandersville remains uncertain after Cobb EMC pulled out of the deal in January, though the developers said at the time the project would continue.

Click here to read John Sibley’s perspective on alternative energy in his column in saportareport.com

Previous Article
In spirit of March Madness, my favorite basketball movies
Next Article
Plan to deepen Savannah’s port has been fully vetted