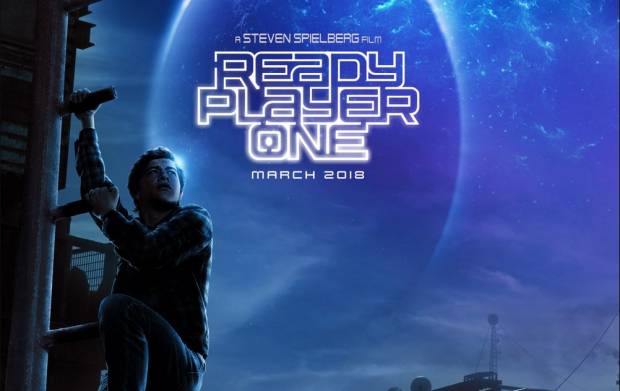 Steve Murray, my former colleague at the Atlanta Newspapers, is one of the best movie critics, anywhere, ever. Together, we had to suffer through some pretty vile stuff over the decades. Sometimes, when something got jaw-droppingly repulsive, he would lean over and whisper plaintively, “Make it stop….”

Oh, how I thought of him during “Ready Player One.”

Based on a book by Ernest Cline, “Ready Player One” is set in 2045, “after people stopped trying to fix problems.” 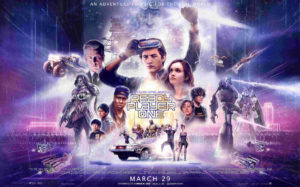 Our teen hero, Wade Watts (Tye Sheridan), lives in “The Stacks”, a decaying vertical trailer park in Columbus, Ohio, which, we’re also told, is the fastest growing city in the country (whether this is some sort of fly-over dis, I’m not sure).

In 2045, reality sucks. No wonder everyone is addicted to the Oasis, a virtual reality wonderland where you can be anyone, go anywhere and do anything. Want to climb Mt. Everest? Sure.  Want to climb it with Batman? Why not?

And you can design your avatar to look like anyone/thing you want, from Beyoncé to Buckaroo Banzai (which is our hero’s favorite movie and a clear sign it was time for me to bail).

But “Ready Player One” comes from Steven Spielberg, not Michael Bay. So hanging in seemed to make some sense.

Anyway, back to the exposition, of which there is a load. The Oasis was created by James Halliday (Mark Rylance), a benign genius/nerd who vaguely recalls a mash-up of Willy Wonka, “Back to the Future’s” Doc Brown, and Woody Harrelson in Lovable Goof Mode.

Halliday passed away several years earlier. However, he left a legacy of sorts. He will bequeath his huge fortune, plus control of the Oasis, to the player who can win three keys.

Wade’s avatar, Parzival (or Sir Percival for Arthurian nerds), looks like a punk-rock imp, blued-eyed and blond-haired (which Wade definitely is not). His major rival/crush is feisty redheaded Art3mis (Olivia Cooke). His bestie is an amusing beastie named Aech (Lena Waethe).

Of course, as we’re reminded more than once, nobody knows what anyone really looks like in the real world. You could discover you’ve been hanging out with a 300-pound guy named Chuck who still lives in his parents’ basement. 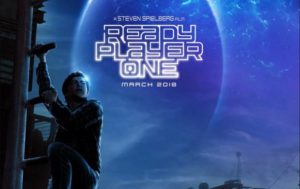 As Wade and company compete to find the keys, the movie drenches us in a tsunami of cultural trivia. Here are Hello Kitty and King Kong. The Iron Giant and MegaGodzilla. “Alien’s” alien literally bursts through.  “The Dark Crystal’s” Karen Underwood is evoked. Even Spielberg’s own T. Rex gets a turn.

Most annoying is a sequence set at “The Shining’s” Overlook Hotel so Kubrick fanboys can bliss out on blood-spewing elevators, creepy twins and that hag in Room 237.  It’s not a bad idea, nor is it badly done.  But so much else has been flying around that you’re pretty much too tired to enjoy it.

The first time Spielberg tried this throw-it-against-the-wall-and-see-what-sticks approach, the year was 1979 and the movie was “1941,” which was so bad it almost ended Spielberg’s career.

However, “Ready Player One” seems to have struck a chord.  And the timing is good: “Black Panther” is winding down and “Avengers: Infinity War” is still a few weeks away.

But wow, what a massive cluster…um…you know… the film is. This would-be player tried her best to be ready, but sometimes — sorry, Hamlet — the readiness isn’t all.