Editor’s Note: This story has been updated to correct the NPU that serves the Vine City and English Avenue neighborhoods.

Discussions over a community benefits deal for neighborhoods near the new Falcons stadium are heading toward a conclusion but aren’t expected to be finalized at a meeting Wednesday evening. 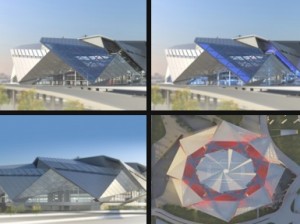 New Stadium Committee unveiled a new round of design concepts on Sept. 26, including these images. Credit: newstadium.atlantafalcons.com

One of three neighborhoods has voted on its wish list from the benefits deal, which includes a total of $30 million in public and private money. Castleberry Hill residents are ready to advance their final proposal, but plans for English Avenue and Vine City still are up in the air because of disagreements among civic leaders in those two communities – where millions of dollars were distributed to various groups as the Georgia Dome was established.

Atlanta Mayor Kasim Reed has indicated he’d like a final deal to be signed Wednesday night. But the amount of work still to be done indicates additional negotiations will be necessary, which seems to push a final deal after the Nov. 5 city elections.

The clock is ticking because Atlanta may not sell any of the $200 million in bonds planned to help pay the future Falcons stadium until after a community benefits deal has been negotiated with three surrounding neighborhoods – English Avenue, Vine City and Castleberry Hill. The Falcons organization hasn’t said publicly when it needs the money.

Another issue that may not be resolved Wednesday is how the proposed projects will be chosen for funding. Two pots of money are available to ease the effect of the new stadium on the three neighborhoods. Issues include game-day traffic and parking, and hopes to improve the area’s quality of life.

The city is providing $15 million collected from a special property tax district on the west side of downtown Atlanta. This money has been described as going to pay for physical improvements – such as streetscapes and a community building.

The Blank Foundation is providing $15 million that has been described as paying for soft costs – such as providing a staff to work in a workforce development program that could be placed in a potential community building.

While the discussion over community benefits has been underway since July 2, the construction process also has been delayed as negotiations continued to acquire land from two churches to build the new stadium on a site south of the Georgia Dome. Now that the site is settled, public progress is expected to resume.

NPU-L, the neighborhood planning unit that serves the English Avenue and Vine City neighborhoods, reportedly has approved a project list.

A notice of the public meeting was difficult to locate Monday. That is a concern because two meeting scheduled for earlier this month were cancelled with little notice. A meeting slated for Oct. 16 was cancelled that day after Reed asked the council to convene a special meeting for the purpose of authorizing the mayor to enter an agreement concerning the amount of money Atlanta is to collect from the 1 percent local option sales tax.

Invest Atlanta’s website was not functional Monday. The city’s development authority has been providing the dates of the meeting and some documents that have been released to the public. The page has not been fully functional since mid summer, when the development authority evidently began work to upgrade its site. The page displayed a note throughout Monday: “Default web page.”

Invest Atlanta’s Facebook page had been updated Monday but did not reference the community benefits meeting.

The council’s calendar does not list the event and has not listed the event since meetings began July 2.

Reed has attended at least one meeting. Otherwise, he’s been represented by his deputy chief of staff and staff members of Invest Atlanta, the city development arm, which is chaired by the mayor.

Reed’s public calendar show that on Wednesday evening he’s slated to attend the opening ceremonies of France-Atlanta 2013, a series of events on innovation sponsored by the consulate general of France in Atlanta and Georgia Tech.