Wyc Orr, a board member of Common Cause of Georgia, is raising questions about the legality of negotiations over a new football stadium and urging for more public involvement in the planned public payments for the proposed $1 billion-plus facility. 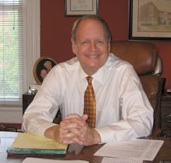 In a piece titled, “Open roofed, closed doors,” Orr writes that if news reports are to be believed: “The negotiations, back-and-forth positions, trade-offs, terms and potential agreements have been conducted with only the barest pretense of opportunity for significant input from the public.”

Orr says taxpayers should press the issue with their state lawmakers, who likely will be asked in the 2013 legislative session to authorize a $100 million increase in the borrowing capacity of the Georgia World Congress Center. The increase is likely to be portrayed as the final straw to completing the deal to start construction, he notes.

Orr is a former member of the state House of Representatives (1989-93) who remains influential in state Democratic circles. He was widely talked up as a candidate to oppose Sen. Saxby Chambliss in the 2008 campaign, but opted to remain as a senior partner at the law firm of Orr Brown Johnson, with offices in Atlanta and north Georgia.

Orr suggests that the negotiations over the stadium are beyond the scope of exemptions in the state’s Open Meeting Law regarding economic development. He states:

In July, Orr took on the state Legislature over its role in the transportation sales tax referendum. Orr contended that lawmakers shirked their duty to provide leadership on a crucial duty of state government. In a piece that appeared in ajc.com, Orr predicted a certain outcome if voters rejected the proposed transportation sales tax: