Stan Kasten on the Atlanta Hawks: ‘They’ll come through this.’

By Maria Saporta
Published in the Atlanta Business Chronicle on September 19, 2014

One person who is watching every move of the saga of the Atlanta Hawks is Stan Kasten, president and part-owner of the Los Angeles Dodgers.

Kasten, along with Magic Johnson, Peter Guber and Guggenheim Partners, paid $2.15 billion to buy the Dodgers in 2012.

Kasten is not a disinterested observer in the Atlanta Hawks. When he was only 27, he became the youngest general manager in the National Basketball Association – joining Ted Turner to run his Atlanta Hawks in 1979. He held that position until 1990 – becoming president of the Hawks in 1986, a position he held until 2003.

It was during Kasten’s tenure that the Hawks enjoyed their greatest success as a basketball team, achieving four straight 50-win seasons (1986 to 1989) and seven consecutive playoff appearances in the 1990s. 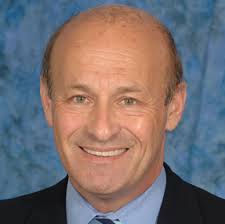 So when Kasten agreed to a telephone interview on Sept. 16 from his work base in Los Angeles, it was thanks to his devotion to the Atlanta Hawks.

“I have a deep and long-standing affection for the Hawks. I always have. And I always will,” Kasten said. “I have been watching what has been going on, and I know everyone in this entire soap opera.”

The soap opera has been played out in the national media. First it was the Sept. 7 disclosure of a racially charged email that Bruce Levenson, the managing owner of the Atlanta Hawks, had sent to Hawks General Manager Danny Ferry and other executives.

And second was the release of racially derogatory comments that Ferry had made about free agent Luol Deng in a conference call among the owners.

That led to Levenson announcing that he was selling his interest in the team and to Ferry taking an indefinite leave of absence. Such turmoil on a team does take its toll.

“For those of us who have a deep feeling for the franchise, the key is getting to the other side,” Kasten said. “I’ve seen it happen here in Los Angeles.”

Kasten was referring to the controversial statements (caught on tape) that Donald Sterling, the former owner of the Los Angeles Clippers, had made to his off-and-on girlfriend about not wanting her to attend games with black men.

After several months of a tug-of-war between Sterling and the NBA, he finally agreed to sell the team.

“You need a strong presence in the middle, in the eye of the storm. Here it was Doc,” Kasten said, referring to former Atlanta Hawks player Doc Rivers, who is now the coach of the LA Clippers.

“The one saving grace in the Atlanta scenario is Steve,” Kasten said, this time referring to recently hired Hawks CEO Steve Koonin, a former executive with Turner Broadcasting System Inc. “He is up to the task of navigating through this storm. All the fans who have confidence in him, he deserves it.”

Kasten said he is confident that the Atlanta Hawks will weather this storm – and much will depend on who the new majority owner will be and whether the executive team can keep the situation under control.

“They’ll come through this. You need a leader to carry the franchise through this, and I think Steve can,” Kasten said. “I know his plan has been good from the start. He’s done a really good job so far.”

Asked whether it would be an advantage to have local ownership of the Atlanta Hawks (Levenson and his business partners who have owned 50.1 percent of the team live in the greater Washington, D.C., area), Kasten said no.

“I’ve always thought that [local ownership] is a nonissue,” Kasten said. “A bad owner from Atlanta is no better than a good owner from somewhere else. What’s important is the strength, quality and commitment of the owner, no matter where that owner is from.”

So the obvious next question is, would Kasten and his business partners be interested in purchasing either a portion or all of the Atlanta Hawks?

“My partners and I – we are in the sports business. Our answer is always that we never discuss things like that,” the ever-elusive Kasten answered. “Obviously I’ve had that question put to me personally a lot in the last week.”

When asked the same question in a slightly different way, Kasten said: “It’s not a subject I’m willing to talk about. That’s not just true about the Atlanta Hawks. It’s true about every possible acquisition.”

“My family is still there. I have two kids and three grandkids who live in Atlanta. My wife lives in Sandy Springs,” Kasten said, adding that he considers Atlanta home but he works in Los Angeles. Both he and his wife, Helen, do a lot of commuting between Atlanta and Los Angeles.

“The irony of all of this, the first time we ever stepped foot in Dodger Stadium was on our honeymoon,” Kasten said.

It’s been quite a ride for Kasten.

In 2006, Kasten became president of the Washington Nationals, a position he held until 2010.

Previous Article
Creating an Atlanta art of civic play with the BeltLine’s Lantern Parade
Next Article
Business Pulse: How CDC Protects the Health of Your Business at Home and Abroad