The issue of regulating Uber-type taxi service in Georgia is to arise again today in the state Legislature. 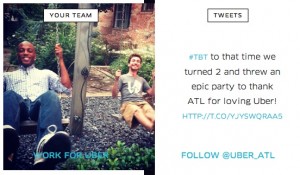 A study committee formed by the state House is to convene its first meeting to consider the topic of “for-hire transportation services.” The House formed the committee following the controversy surrounding a proposal that would have regulated Uber, Lyft and other app-based taxi services.

The agenda for today’s 2 p.m. meeting states only that: “The initial meeting will be an organizational meeting to discuss how the study committee came about and how the committee will move forward.”

Any forward movement must occur swiftly if the committee is to issue any recommendations for legislation to be introduced for the legislative session that begins Jan. 12, 2015

The committee is to stand abolished on Dec. 1, according to the measure that created it, House Resolution 1805.

Uber responded to HB 907 by hiring influential lobbyists including Lewis Massey, a former secretary of state, and Bruce Bowers, the son of a former state attorney general who brings experience gained through his role as senior advisor on the transition team of Sonny Perdue after Perdue’s election in 2000. Both remain registered as Uber lobbyists with the Georgia Government Transparency and Campaign Finace Commission.

During the debate over HB 907, Powell was often characterized in media reports as acting to protect the state’s existing taxi cab industry from economic threats posed by Uber, Lyft and other new forms of for-hire transportation.

Powell contended his purpose was to protect the public from unscrupulous operators of for-hire transportation. Powell said the state’s existing for-hire laws do not provide adequate protection from the growing business model based on private citizens driving personal vehicles to transport clients referred by companies such as Uber.

Peachpundit.com published a letter attributed to Powell that describes the motive behind the bill:

The legislation states that the committee was formed for the following purpose:

The committee also is to discuss additional measures to curb drunken driving, such as ignition locks and counseling.