State Sen. Vincent Fort (D-Atlanta) has asked the secretary of the Army to block the conversion of Fort McPherson into a movie studio, as proposed by filmmaker Tyler Perry. 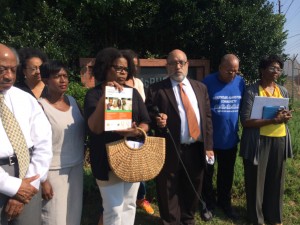 Fort quickly pivoted to the political side of the debate over the fort’s reuse, after beginning his letter to the secretary with a recount of the public process that ended with the approval of a plan to build a mixed-use community on the grounds of the old fort.

To consider a studio now, without any public review, is, “the old ‘bait and switch’ that has been used for centuries to exclude people of color and the powerless from important economic decisions,” Fort wrote in his letter to Army Secretary John McHugh.

“The reuse plan was not developed to enrich few people, but to uplift the entire community,” Fort wrote. “At its heart is the creation of jobs and affordable homes for our people and for future generations….”

“Finally, I am concerned that this is occurring in a predominately African-American community,” Fort wrote. “I wonder if this would happen in other communities.”

The plan became known in mid June and, on Friday, the board that oversees the fort’s conversion to civilian use is to meet to consider the “purchase and sale of real estate.” 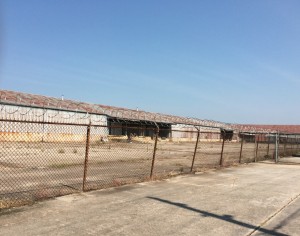 Some residents hope the redevelopment of Fort McPherson will uplift its neighborhood, including this warehouse district northeast of the base. Credit: David Pendered

The meeting agenda does not indicate the identity of the purchaser. Members of the McPherson Implementing Local Redevelopment Authority have declined to discuss Perry’s proposal in public since it became public knowledge.

“Let’s be real,” Fort said. “This is a predominately African American community. Would this happen in other communities?”

“I’ve never seen anything quite like what we’re seeing with Fort McPherson happen anywhere else in the city,” Fort said.

Fort convened a media conference Thursday morning to announce the request he’s submitting to the Army secretary. Fort was flanked by about a dozen supporters.

Some of the residents said they do not plan to rally in front of the fort Friday, as was discussed Thursday. Instead, they plan to have a community meeting Aug. 14.

Fort McPherson was ordered closed in September 2005. Congress approved the recommendations of the Defense Base Closure and Realignment Commission, which called for the closure of a total of 33 major installations, according to a federal report. BRAC intended to streamline military bases and reduce costs.