In 2013, Sanjay Patel, director of strategic projects for Soccer in the Streets, was on his daily MARTA ride downtown when something caught his eye — large swaths of land allocated for parking. Drawing inspiration from the dense development and multi-use transit stations in England, his native country, Patel envisioned replacing the parking lots with soccer pitches. 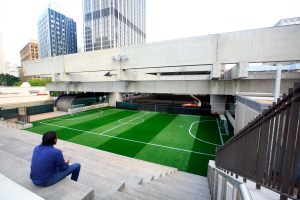 Thus, StationSoccer was born — a Soccer in the Streets (SITS) initiative to establish a network of soccer fields connected by MARTA stations, creating a free league for local kids called the “League of Stations.”

SITS is an Atlanta-based nonprofit that uses soccer as a mode to “create young leaders who live rich lives and cultivate healthy communities.” The organization recently opened their fifth location at Kensington Station on July 16.

“We were embarking on something that was the first of its kind in the world,” Patel said. “I was very motivated because I knew that it worked. I’d go on the train in the U.K. and see kids in soccer gear on the train, and I did it as a kid. I knew public transit worked.” 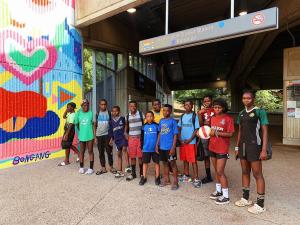 The Kensington crew arrives at their new field via MARTA. (Photo courtesy of Soccer in the Streets.)

He continued: “Imagine West End United versus Kensington FC, and the kids take the train to play each other, thus eliminating the transportation costs and hurdles.”

After years of hard work and persistence, SITS debuted the world’s first transit soccer league in 2016 at the Five Points Station.

The pilot program was a hit, and the initiative now spans five train stations around metro — with a goal of 10 in total — serving around 200 kids at each league. Right now, folks can head to MARTA’s Five Points, West End, East Point, Lindbergh and Kensington stations for a pick-up game. 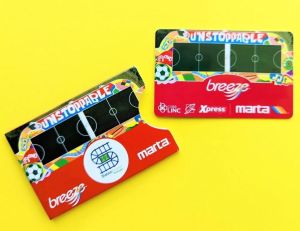 The league is open and free to any kid who wants to join. SITS also offers an adult league, and the price of membership directly funds the free kid’s programming. Players can hop on the train for free using a StationSoccer Breeze Card.

In addition to MARTA, other local organizations have since joined as partners, including The Atlanta United Foundation, Atlanta Department of City Planning and TransFormation Alliance. 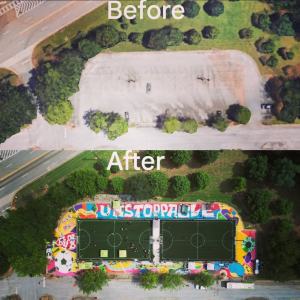 StationSoccer isn’t just about the sport. In addition to encouraging active lifestyles and connecting communities through public transit, SITS strives to improve the built environment with community gardens and murals. The team is also working to repurpose a train car into a Learning Center at West End.

“We’re a nonprofit sport-development organization but we’ve hired a full-time community gardener,” Patel said. “We’re really going back to basics and providing things everyone needs — safe places to play, community gardens, artwork. It’s a community project, really, and the stations and projects become a fabric of the community.”

After the recent opening at Kensington Station, Patel said several cities have reached out expressing interest in bringing the project to their area. With growing momentum, the team hopes to open all 10 fields by the 2026 World Cup hosted in Atlanta. 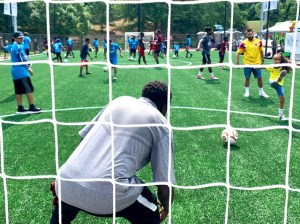 Community leaders and members gathered for a kick-off on opening day at Kensington Station. (Photo by Kelly Jordan.)

“Numerous cities have been in touch with us about how they want this,” he said. “We think Atlanta is the pilot for a national template.”

He continued: “We realize there are so many kids that need this. Atlanta is one of the top cities in the country for income inequality. [By 2026,] we think we’ll have close to 2,500 kids playing in this system. We’re going to make a lot of consistent impact that will affect families through health equity. Now more than ever, given what we’ve just been through, this work is so important and we’re humbled and happy to be able to do this work.”

To see more from opening day at Kensington Station, click here to check out shots from SaportaReport’s Kelly Jordan.

Check out the map below for a breakdown on the open and pending locations in StationSoccer’s League of Stations. By Maggie Lee.