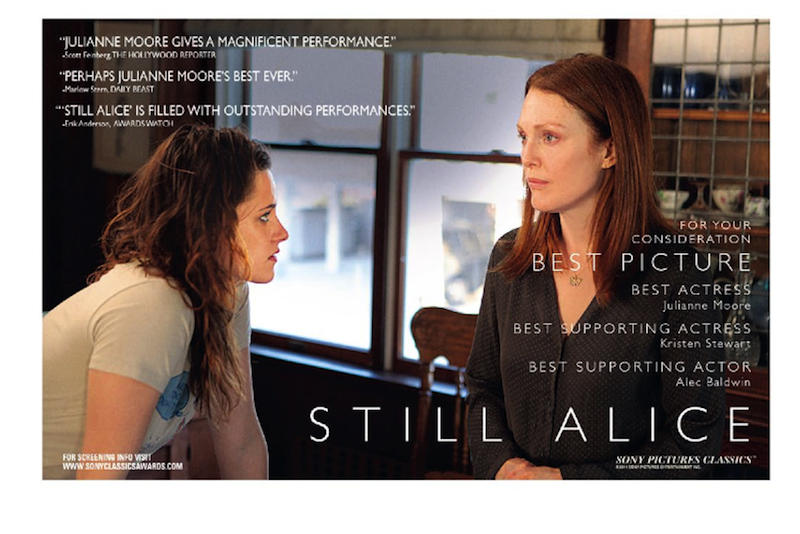 For Lewis Carroll’s Alice, things keep getting curiouser and curiouser.

For Alice Howland, exquisitely played by Julianne Moore in the new movie, “Still Alice,” things get curiousier and curiouser, and then scarier and scarier.

You see, Alice, a respected, prize-drenched professor of linguistics at Columbia, is experiencing early-onset Alzheimer’s. 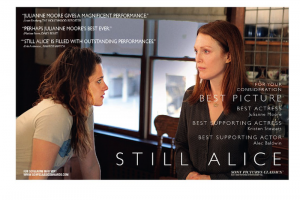 As happens in most Serious Disease Movies, be it “The Theory of Everything” or “Dark Victory,” the signs are incremental. During a lecture, Alice reaches for a word, and it stubbornly refuses to come.  She goes for her usual jog around campus and realizes she isn’t quite sure where she is.

No wonder everyone in her family tries to shrug it off. After all, who hasn’t blanked on a favorite movie or a dentist appointment?

We call them senior moments…nervously.

As if dictated by its title, “Still Alice” relishes stillness. Instead of pulse-pounding, soundtrack-thundering, OMG-she’s-losing-it! scenes, the movie plays it careful and low-key. Admittedly, at times, that means the film can be slight, almost wispy.

Yet, Moore’s astonishing ability to maintain Alice’s delicate yet inevitable free-fall holds us.  She feels it all. Grief. Embarrassment. Fear. Deceit. Brazen courage.  Wary-eyed anger. Most especially, she feels confusion — something this highly-focused, high-achieving woman has rarely felt. 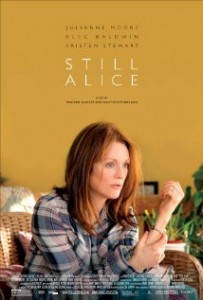 It’s as if we are watching someone being kidnapped into a Victorian fairy realm, where time and truth have a different meaning. Her disease is a form of obscene enchantment.

Alice fiercely insists she is still part of our world, that she’s still… Alice.

Moore has been one of our very best for so long, one is hard put to think of a time when she wasn’t in the very forefront of Hollywood A-Listers.

She’s paid her dues, yes, but in a unique way. Which only says more about her as a professional and a talent.

There’s poem — by Stevie Smith, I think — that ends, “Not waving but drowning.”

In “Still Alice,” we witness a woman who is waving and drowning. It is her fate.  It is who she is. Moore makes watching her struggle a rare, if wrenching, privilege.