Editor’s Note: Donita Pendered assisted with the data analysis in this report.

Despite the relative wealth of schools systems in metro Atlanta, they have not fared much better than the rest of Georgia over the past decade in terms of maintaining their number of teachers and school days, and classroom sizes, a new report shows. 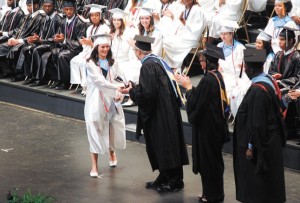 A recent report from the Georgia Budget and Policy Institute warns that the ingredients that lead to high school graduation are lacking in metro Atlanta school systems. Credit: Reporter Newspapers

The non-profit Georgia Budget and Policy Institute reports a pattern of what it calls “troubling trends” in funding for the state education system. And the trouble didn’t start with the recession: State cuts in per pupil spending began in 2002 and, since then, spending has fallen by 17.6 percent in inflation-adjusted spending, GBPI reports.

The report clarifies at least part of the challenge facing the five-year strategic plan unveiled in June by the Metro Atlanta Chamber. The plan, Forward Atlanta, says the region must “reinvigorate Pre K through college education” in order to become a “world-class, 21st century metro.”

A review of GBPI’s statewide figures show that – since 2009 – the six districts in the core of metro Atlanta have reduced the number of teachers and cut their pay. Five districts have more students in each classroom. Three districts teach students fewer days a year.

The ramifications for the future are clear, according to Alan Essig, GBPI’s executive director.

“Georgia’s declining support for public education threatens the long-term health of the state’s economy,” Essig wrote when the report was released Oct. 15.

“Attracting high-wage employers requires a large, well-educated, and highly skilled workforce,” Essig wrote. “Failure to invest in public education is making it difficult to reach the ambitious goals policymakers have set for improving our schools and attracting more employers to the state.”

The districts included in this review are Atlanta, Clayton, Cobb, DeKalb, Fulton and Gwinnett. Here’s how they fared in the data the districts reported to GBPI, in a comparison of fiscal years 2009 and 2012:

More students in each classroom

The report contains some financial information that illuminates the numbers.

State and local revenues have fallen in most districts from 2008 to 2011, although Fulton County reported an increase in local revenues, according to a review of GBPI’s report:

Here’s a summary from the report that places the figures for metro Atlanta into the statewide scenario:

GBPI’s webpage says the organization is an independent, non-partisan, non-profit group founded in 2004 to raise policy issues in order to advance the quality of life in Georgia.