Did you know that Georgia leads the nation in green affordable housing?

Because of the outstanding efforts of the Georgia Department of Community Affairs (DCA), which is responsible for establishing the QAP for Georgia, our state has ranked at the top of the Global Green list for the past five years.

According to Michael Collins, an architect with the Office of Affordable Housing at the DCA, from 2004 to 2008 Georgia QAPs required green building elements but did not require third-party verification of these elements.

Therefore, although all developments built during this time included some green elements, only 25 percent of these projects, numbering 39 out of 160, actually obtained certification under a green building program such as EarthCraft, LEED or ENERGY STAR®.

In 2009, the Georgia DCA decided to revise its QAP guidelines to encourage third-party verification by an independent green building program. This revision, says Michael Collins, makes it easier for the Georgia DCA to track whether developers follow through on their proposals.

The revision is an important factor in Georgia reaching the top of the QAP rankings as Global Green encourages verification of four key categories of green building: smart growth, energy efficiency, resource conservation, and health protection.

As a further result of Georgia’s revised QAP guidelines, all 31 of the selected affordable housing developments to be built within the next two years in Georgia plan to certify under a green building program.

Roughly 26 of these projects will pursue EarthCraft certification, a program offered by the Greater Atlanta Home Builders Association and Southface. Three projects expect to be certified under the U.S. Green Building Council’s LEED program and five plan to qualify for the federal ENERGY STAR®.

This is notable because green building projects promote energy efficiency and alternative modes of transportation which help low-income residents save money and advance the economic development of their own neighborhoods.

In times like these, paying the monthly utility bill and filling up the gas tank often imposes a financial hardship on low-income families, forcing them to choose between paying for energy and other basic needs.

However, as EarthCraft buildings also qualify for the ENERGY STAR, a qualification that ensures a minimum energy savings of 15 percent over code, residents of EarthCraft-certified affordable housing units save money each month on their utility bills – money they can then use for other necessities.

They also save on transportation costs because developers of EarthCraft communities are encouraged to locate their affordable housing projects near transit, bike paths and other businesses.

With the DCA’s leadership, the money that the residents of these green affordable housing developments would have spent for energy can now be re-directed to local businesses, which helps create jobs and grow the local economy. This is an especially important antidote to the rising unemployment rate in Georgia.

In addition to economic considerations, green affordable housing developments help provide a healthy indoor and outdoor environment for residents by reducing exposure to pollutants like radon, a major cause of lung cancer across the country.

They can also lower the incidence of asthma attacks, a common occurrence in low-income areas when residents are exposed to irritants like particulate matter from industrial air pollution, mold and insect secretions.

EarthCraft certified communities and buildings improve outdoor environments and facilitate more active lifestyles through walkable access to nearby destinations and green space preservation. This in turn helps to reduce obesity and its associated health care costs.

We applaud the work of the Georgia DCA for its leadership in protecting and improving the lives of Georgia’s low-income citizens. But still, there remains much work to be done.

To ensure all Georgians reap the benefits of green building, we challenge state and local governments, private sector organizations, and individuals to embrace green building opportunities, to support the Atlanta Green Building Ordinance, and to advocate for ambitious new state incentives that encourage energy and water efficiency.

Only in this way can we establish a region-wide precedence for improving lives and preserving critical energy, water and natural resources for our children and grandchildren. 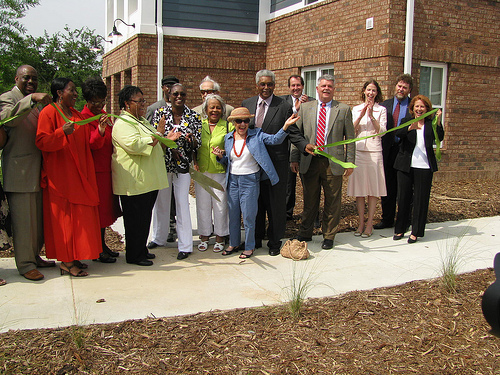