A nascent movement in the sustainability arena flexed its young wings in Atlanta last week. 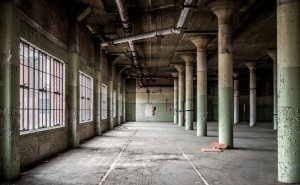 The renovation of an old Sears warehouse into the mixed use Ponce City Market represents the cradle-to-cradle concept of reuse that’s associated with the convergence of sustainability issues. Credit: Gail Des Jardins via Flickr

The movement involves the merging of issues including renewable energy, green buildings, and consumer products free of toxic chemicals. Apple CEO Tim Cook epitomizes the new concept for one advocate who spoke at a panel discussion sponsored by Southeast Green.

Cook drew headlines for this Feb. 28 remark to shareholders who criticized Apple’s green investment strategy: “If you want me to do things only for ROI [return on investment] reasons, you should get out of this stock.”

Panelist Judith Webb said Cook’s comment on his commitment to Apple’s triple bottom line – to include social and environmental concerns in addition to profit or loss – conveys a lot about the evolving state of sustainability. Webb is an Atlanta-area resident who serves as a senior vice president of the U.S. Green Building Council, which developed the LEED rating system.

“This is the new normal – everything is connected,” Webb said, elaborating with an example that shows how fast the concept of sustainability is spreading among young people. 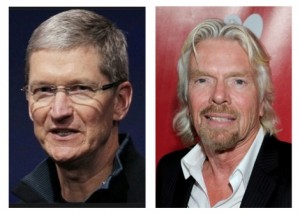 To promote the next generation of sustainability, the message some CEOs are sending to shareholders is: “Get out of this stock,” Apple CEO Tim Cook (left); and, “Get out of our way,” Virgin CEO Richard Branson (right). Credit: David Pendered

“When we get somebody to invest in a STEM program [science, technology, engineering, math] with a group of kids, the students already are thinking as sustainability natives,” Webb said. “That’s just how they are.”

Southface Executive Director Dennis Creech said a similar convergence of sustainability premises emerged last week during the Greenprints conference, which brings together researchers and practioners in the field of green buildings and communities.

“People don’t’ realize there’s a transformation going on across the country,” Creech said. “There still are more silos than you would want … the research community tends to be siloed, design professionals are just starting to come on board with green in efficiency for energy and water and recycled materials.

“Now we’re trying to get them to work more closely with the health professionals to bring together the research, health, design and materials sides,” Creech said. “We want it all. And there’s no reason we can’t have it.”

Transparency is one of the threads that connects the blending issues of sustainability. Often, it’s the lack of transparency that’s shared.

Heather White, another panelist at the Southeast Green event, said corporations and their advocates – particularly the American Chemistry Council – fight hard to prevent consumers from knowing the building blocks of materials they use every day. White serves as director of the Environmental Working Group, a Washington-based, non-profit, environmental advocacy organization.

“On every level, they have tried to keep consumers from knowing what is in the products they use,” White said.

“BPA is a perfect example,” White said. “It’s being replaced with BPS, which may be as potent as BPA when it comes to interfering with the hormone system. Because this information is secret, we, or university researchers, don’t have the capacity to be back-stoppers for the public.”

Concerning renewal energy, Carrie Cullen Hitt said at the Southeast Green event the deck is stacked in favor of the existing utilities largely because the status quo has existed for so long. Both the utlilities and their regulators are not equipped to discuss energy sources arriving from new sources – again, representing a situation of silos – according to Cullen Hitt, senior vice president of state affairs for Solar Energy Industries Association, a national trade organization for the solar industry. 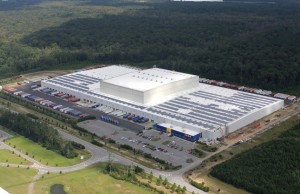 IKEA installed rooftop solar panels on its warehouse in Savannah that are capable of producing 2 million killowatts of power a year. Credit: greenbuildingelements.com

“The utilities as we think of them today, their business model was built 100 years ago,” Cullen Hitt said. “New technologies, new customer demands … threaten that model and the regulatory framework that’s structured around it. It will change. It will take a long time, but it is changing.”

Creech, at Southface, said transparency is a concept that consumers will demand as part of the marketplace. Transparency will be part of the “cradle to cradle” movement, which traces its roots to a 2002 premise that all manufactured goods will eventually be recycled.

Which brings the issue back to the comment from Cook to Apple shareholders. Among other CEOs who jumped on the bandwagon of the triple bottom line was Virgin CEO Richard Branson, who has supported alternative sources of energy.

Previous Article
Creating Atlanta’s “third places” for all – rich, poor and every one in between
Next Article
Saving the Fox Theatre showed the value of preserving Atlanta’s history – a lesson we must never forget