Sustainable wedding: Altar in a pecan orchard draws farmers from near, far

Editor’s Note: This is the conclusion of our three-part series on Georgia’s sustainable food movement. Links to previous stories are at the bottom of this report. 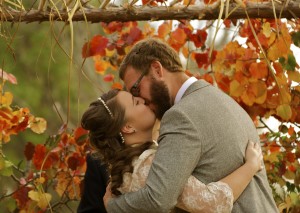 Gordon – Farm weddings are all the rage these days, but that’s not why Chelsea Losh and Bobby Jones chose a rustic setting.

They live and work on Babe+Sage Farm. These two graduates of Georgia College have worked since summer 2011 to reclaim the old Oetter place and grow it into a sustainable vegetable farm.

Their wedding celebration showed that they have grown a way of life, as well. Friends traveled from farms as far as West Virginia and as near as Sparta. And there was a surprising link involving relatives in Alabama and the Jenny Jack Sun Farm in Pine Mountain.

Rain threatened to dampen the Losh-Jones wedding day, Nov. 23. There never was any real question the venue would be moved from an altar in a pecan orchard, a reception at a barn, and dinner and dancing on a field near the farmhouse. 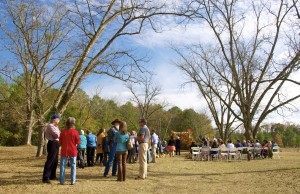 The wedding altar was beneath the pecan trees at the end of a path that’s featured on the farm’s webpage. Credit: Donita Pendered

Friends who run Jenny Jack Sun Farm, Jenny and Chris Jackson, offered to loan any number of umbrellas from the 400 they’ve acquired for their farm gatherings. Through one of those odd turns life can bring, transporting the umbrellas proved to be no problem.

Bobby’s aunt and uncle just happen to be customers of Jenny Jack’s CSA program (community supported agriculture). Aunt Tracey and Uncle Bob Johnson, who reside in Lanette, Ala., agreed to transport about 150 umbrellas to Babe+Sage Farm.

The rain didn’t come and, by the time the couple stood at the alter at 2 p.m., the weather had sharpened to a crisp autumn afternoon that’s the stuff of Middle Georgia memories.

Among the groomsmen at Bobby’s side was Chris Jackson. This Jackson is a different person from the Jenny Jack farmer, and this Chris Jackson manages Fort Creek Farm, in Hancock County, near Sparta. The farm produces meat from beef, chicken and goat, and eggs, and the proceeds help maintain the place. 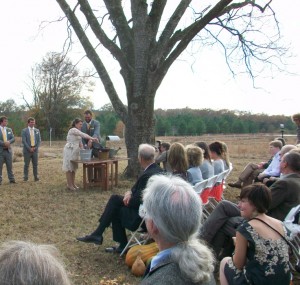 Fort Creek Farm hosted a shower for the wedding couple, providing a glimpse into an historic property whose website says it is, “the only intact antebellum plantation of its size still in private hands.” The homestead is so remote that the Union Army didn’t burn it and the remaining structures include the original jail and cotton mill.

Sunshine and Steve Vortigern, and their two children, made the 12-hour drive from West Virginia to join in the celebration. Chelsea and Bobby got their first taste of real life as organic farmers on Round Right Farm, owned by the couple.

A summer of work as paid apprentices on Round Right Farm didn’t shake the young couple’s desire to begin their own sustainable farm. After bringing in the summer crop, Bobby and Chelsea moved to Pittsboro, N.C. and each pursued a certificate in sustainable agriculture from Central Carolina Community College. Soon after, they returned to Middle Georgia and completed an arrangement with the Oetter family to move onto the out-of-use farm and nurse it back to productivity. Doug Oetter offered a reading at the wedding.

The wedding altar was set in that pecan orchard just down a path from the farmhouse. When the time came to light and launch the eco-friendly wish lantern, a light breeze blew the orange orb toward the farmhouse, and toward that orchard. 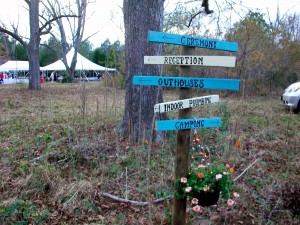 Editor’s Note: Chelsea and Bobby Losh Jones are relatives of the author.

Previous stories in this series:

Part 1: Sustainable packaging: The food container is just as important as the edible contents it transports 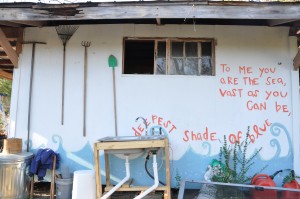 Babe+Sage Farm displays a sense of humor about all the work being done. Credit: Donita Pendered

This working barn was the first stop after the ceremony, a beverage center with a bean bag game. Credit: Donita Pendered 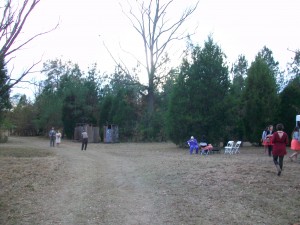 The wedding couple pauses for a photo near three privies built just for the occasion. Credit: David Pendered 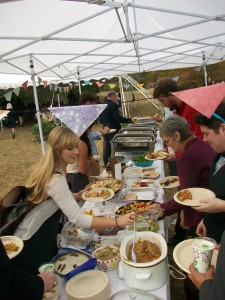 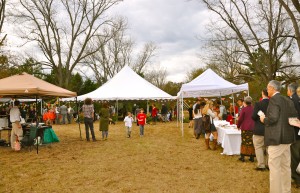 Banquet tents were set up around a space that became the center of toasts and dancing. Credit: Donita Pendered 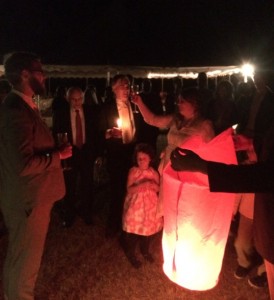 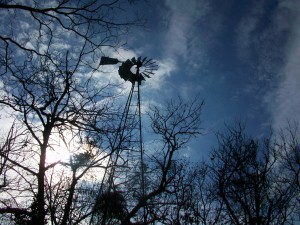 This wind mill has stood outside the farmhouse door since the Oetters resided there, and now greets the newlyweds. Credit: David Pendered