Georgia’s latest efforts to strengthen rural Georgia include last week’s unveiling of a transportation initiative, more broadband and continued maintenance of state-owned railroads that offer an alternative to shipping freight by trucks on highways. 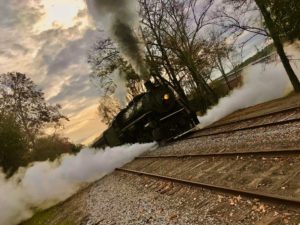 An excursion train through the mountains of Northwest Georgia travels along a shortline the state has provided funds to maintain – Chattooga and Chickamauga Railway. Credit: Kelly Jordan

All are part of the state’s attempts to support jobs and livable communities beyond the borders of metro Atlanta and other cities. The goal is to stem, if not reverse, a migration from rural areas toward cities.

This pattern is a national phenomenon that, in Georgia, is characterized in two statements in a 2017 report by the Rural Development Council, convened by the state House of Representatives and reauthorized to continue through 2022:

The transportation initiative is an update of the state’s 2017 Freight and Logistics Plan, and it carries the subtitle, A Business Plan for Infrastructure.

The state Department of Transportation convened an industry forum April 20 to describe the state’s intent for the update. Requests for proposals are due June 7 and the timeline envisions approval in January 2023 by the Federal Highway Administration. 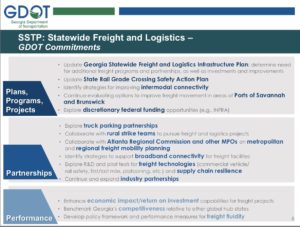 This tripod of outcomes is the core of the state’s mobility efforts, which intend to sustain rural Georgia while promoting jobs and growth statewide through the speedy flow of goods. Credit: GDOT

The logistics plan aims to leverage the interest the private sector has shown in developing in areas outside metro Atlanta. Some 83% of new private investment of new private investment from July 1 through Oct. 31 was outside metro Atlanta, according to the presentation. Georgia ranked third in the nation in the number of micropolitan areas tracked by “Site Selection” magazine – including Jefferson (2nd), Calhoun (tied for 17th), Bainbridge and Dublin (tied for 21st), Fitzgerald and LaGrange (tied for 32nd), and Americus, Thomasville and Waycross (tied for 55th), according to the report.

The Freight and Logistics Plan is part of Georgia’s overall strategy to improve the statewide transportation network, which is comprised of roads, bridges, airports and seaports, and rail, according to Jannine Miller, the governor’s appointee to the executive team at the Georgia Department of Transportation.

“This is really all about advising our transportation investments so they do the most to improve economic impacts,” Miller said during the presentation.

As part of the Legislature’s effort to help implement mobility improvements across the state, lawmakers this year approved a measure to ensure public private partnerships can be used to help fund intermodal and rail projects. House Bill 577 addresses a wide array of GDOT-related issues, ranging from P3 funding to new rules regarding road work done near certain waterways. The governor’s office is reviewing the legislation, Miller said. 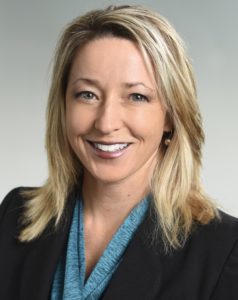 The broadband initiative was placed at the center of the state’s economic focus by business and political leaders in January at the annual Eggs and Issues breakfast, hosted by the Georgia Chamber of Commerce.

Gov. Brian Kemp, Lt. Gov. Geoff Duncan, House Speaker David Ralston, Georgia Chamber board Chair Teresa White and others on the virtual podium spoke specifically to upgrading rural broadband or referenced it in comments about freight and logistics. The attention builds on the foundational work of the House Rural Development Council, of which Ralston has been a forceful advocate.

Kemp and Duncan followed up their comments at the Jan. 13 chamber breakfast with the Feb. 8 announcement that 80,000 homes and businesses soon are to be able to connect to broadband. Valued at $210 million, the agreement brings together Central Georgia EMC, in Jackson; Southern Rivers Energy, in Barnesville; and Conexon to install 6,890 miles of fiber network in 18 counties. Service is to begin in some areas in June, and by 2025 across the area. 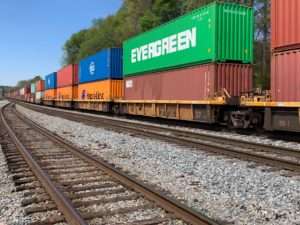 Ensuring the resilience of the supply chain and expanding digital management of freight is a central topic of the next update of Georgia’s Freight and Logistics Plan. These containers are paused in Northwest Atlanta. Credit: Kelly Jordan

The railroad initiative provides $12.5 million to repair and maintain state-owned shortline railroads in order to “to help reduce truck traffic on state highways.” The Legislature agreed to sell a taxable bond and pay it off over a period of up to 20 years in increments of $1.1 million a year, according to the budget for the fiscal year that begins July 1.