Sweet Auburn Avenue’s commercial district has the dubious distinction of making its way twice to the list of the country’s most endangered historic places.

That announcement was made Wednesday by David Brown, executive vice president of the National Trust for Historic Preservation. Brown and others spoke at an event on a vacant tract of land at the corner of Auburn and Piedmont avenues, where a building stood until it fell from disrepair. 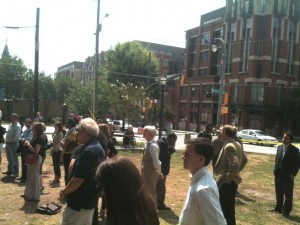 A crowd gathered to hear a warning about Sweet Auburn's commercial district, which the National Trust for Historic Preservation says is threatened by buildings such as the condo in the background. Credit: David Pendered

The designation comes just three months after Atlanta’s Urban Design Commission halted the planned demolition of most of the building that once housed the Atlanta Daily World newspaper. The developer, who planned to build a new structure behind the old facade, subsequently announced it would not appeal the ruling.

Other sites that made this year’s list of 11 most endangered places are the Ellis Island Hospital Complex, numerous Post Office buildings, Theodore Roosevelt’s ranch in North Dakota, the Malcolm X – Ella Little-Collins house in Boston, and the Princeton Battlefield.

Click here to read more about the 2012 list of America’s 11 most endangered historic places, according to the National Trust for Historic Preservation.

Some historic preservationists hope the spotlight on Sweet Auburn that will be created by the designation will promote the planning, funding, and development of a historically sensitive restoration of a historically significant corridor.

Cong. John Lewis vowed to use all of his influence on the House Ways and Means Committee to provide federal support for rehabilitating historic buildings, according to remarks by Jared McKinley, Lewis’ outreach coordinator. Lewis was unable to attend in person, 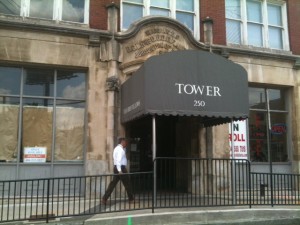 The Odd Fellows Building, built in 1912, housed African American businesses and social functions, making it the type of building preservations are concerned about because of potential demolition. Credit: David Pendered

Sheffield Hale, president and CEO of the Atlanta History Center, said Sweet Auburn’s commercial core is significant because it embodies the “persistence and resilience” of African American business owners as they worked to overcome economic and cultural oppression.

Fortune magazine presented Sweet Auburn to its readers in 1956. The article delivered to a national audience the description of the avenue coined by civic leader John Wesley Dobbs, who said Auburn Avenue was “the richest Negro street in America.”

This is the second time Sweet Auburn has made the national list. The first time was in 1992, when decay threatened the residential district on Sweet Auburn’s eastern portion. Since that time, the residential area that includes the Martin Luther King Jr. birth home has blossomed into a sought-after residential community.

“The Sweet Auburn historic district is not only significant to Atlanta but also garners international recognition as the birthplace of the civil rights movement,” said Mark McDonald, president and CEO of The Georgia Trust. “We look forward to working with the National Trust and local partners to preserve this culturally significant commercial district.”

Atlanta Councilmember Kwanza Hall, who represents the area, said the inclusion on the lists of endangered and imperiled places underscores the need for a massive effort to preserve, protect and promote Sweet Auburn’s commercial core.

“What we need is a Marshall Plan,” Hall said, citing the sweeping post World War II program by which the United States helped rebuild Europe. “It’s time to do it, ya’ll, in a way it’s never been done before.”

Mtamanika Youngblood’s work in the community spans the time of both designations. She led the renewal of the Old Fourth Ward, which includes Sweet Auburn’s residential area. Now she hopes to help rejuvenate the avenue’s commercial core.

“We can’t afford to miss this opportunity,” Youngblood said. “If we miss it, there won’t be enough historic fabric to save. We have to show pluck. All of us have to show that it’s important to save this area.”

Youngblood said she disapproves of the development of a structure of condos and retail space by the Integral Group. Integral built a residential/retail structure, Renaissance Walk at Sweet Auburn, which is the type of project Integral intended to develop by incorporating the facade of the old Atlanta Daily World building.

Youngblood said the design of Renaissance Walk is very suitable for Midtown. But Sweet Auburn is not Midtown, and its architectural fabric needs to be respected and promoted.

“It’s neither fish nor fowl,” Youngblood said of Renaissance Walk.

Vaughn Russell, though, said he likes the new development and thinks it fits well into the community. Russell was walking through the crowd at the event, handing out menu cards for a friend who’s opened Mangos Caribbean Restaurant, which is across Auburn Avenue from Renaissance Walk.

“I’ve been coming here since 1992, and I like the way it’s come,” Russell said. “These condos fit in. They’re not an eyesore. I’m concerned that if we wait too long, developers could pull out and these old buildings will fall apart.”

Boyd Coons fought vigorously against the demolition of buildings that made way for Renaissance Walk.

Coons, the executive director of the Atlanta Preservation Center, led a small but unsuccessful effort to protect the old buildings. Included in that effort was a quonset hut that Coons said embodied the spirit of African American business owners trying to move ahead at a time of limited access to capital.

“I’m hoping this designation won’t be just another poster child,” Coons said. “But, rather, I hope it becomes a poster child of the preservation of historic districts both along Sweet Auburn and over on the west side of town.”

Bakery shop owner Sonya Jones said she just hopes that past will be respected and its buildings restored.

Jones has helped kept the doors of the Sweet Auburn Bread Co. open for 15 years. She said her store routinely is filled with shoppers who said they were just passing through Atlanta, but couldn’t resist delaying their journey to stop at the hallowed ground of Sweet Auburn. Former President Bill Clinton had his picture snapped while eating a treat from the bakery.

“This time is a little bittersweet,” Jones said. “This is the time for this to happen.”