A scene from "Sylvie's Love"

“Sweet” is the sort of word reviewers typically use to describe something inoffensive, but no more than so-so.

That’s not the case with “Sylvie’s Love,” an unabashedly sweet movie that dares to be about a couple of people who fall in love, face difficulties, and work their way to a happy ending.  That the pair are Black, and the time frame is the late ‘50s and early ‘60s make the movie all the more special. Yes, racial realities loom in the background, including the March on Washington, but “Sylvie’s Love” is exactly what its title says it is: a love story. 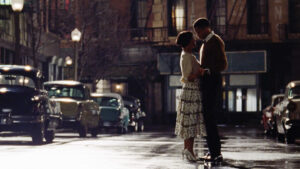 A scene from “Sylvie’s Love”

Sylvie (Tessa Thompson) inhales TV; we meet her glued to an episode of “I Love Lucy” even as she runs her father’s record store in Harlem. That’s where she meets Robert (former pro NFL-er Nnamdi Asomugha), a talented jazz saxophonist who needs a day job. Though she’s engaged to a rich guy currently overseas in Korea, Sylvie and Robert quickly make beautiful music together – and it’s not just because she’s as conversant in Mingus and Monk as he is.

But there are difficulties. Such as her fiancée’s return.  And Robert’s departure for Paris when his band is taken up by a wealthy, well-connected white patroness. And Sylvie’s desire to have a career as a TV producer which, her now-husband boils down to: “I thought we agreed you could work as long as it didn’t interfere with your responsibilities at home” (This sentiment is expressed when he springs a business dinner on her, which she, of course, is expected to provide despite her full-time job). 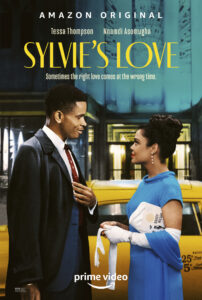 Overall, however, politics aren’t the point here. The film takes place within its own mostly Black context (an odd, but sadly accurate inversion of most Hollywood – read mostly all-white – movies). However, that allows it a freedom to be itself and tell its own story about these people, not these politically-infused figures.  So, yes; “Sylvie’s Love” could be accused of donning blinders. Yet that’s what also gives it an unexpected freshness.

The picture conscientiously recreates the cinematic style of its period setting, but without the self-conscious irony of, say “Far From Heaven” or a Wes Anderson work. Director Eugene Ashe – this is only his second film – doesn’t want us at arm’s length; he wants us to feel as embraced by his movie as Sylvie and Robert are by each other. The result is a certain kind of warmth and, yes, sweetness, that too few films are able to attain. Or even attempt.

We want to spend time with these characters – more, in fact, than the movie allows, which makes for a surprisingly abrupt ending. Perhaps the idea all along was to plant the seed for a sequel. Well, seed planted.