The Falcons stadium is the next “Peyton wall” of Atlanta, a lawyer said Monday, comparing the sports venue to an actual wall the city erected across Peyton Road in 1962 to separate black and white neighborhoods. 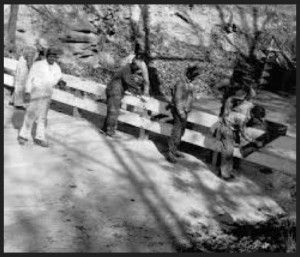 By another account, the stadium saga is Atlanta’s version of “Groundhog Day.” In the movie, actor Bill Murray relived the same depressing events day after day after day. Poor people are the protagonists in this comparison to real life.

Symbolic language certainly was out in force Monday, following a court hearing intended to authorize Atlanta to sell bonds to help pay for the $1.2 billion stadium. A judge deferred the bond sale for at least seven weeks by giving five residents until April 10 to prepare their legal case against the bond sale.

For the past year, a lot of the buzz about the stadium has involved basic questions – what will the stadium look like; will the north or south site be selected; will those two congregations sell their church property; what benefits will the communities realize from the $1.2 billion project.

Now the tone has changed.

It’s not just that Atlanta has signed a deal that lasts possibly through 2050 to allocate its hotel/motel tax to the stadium, as opposed to other civic improvements. 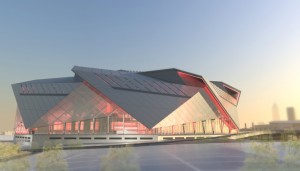 A blank wall of the Falcons stadium will face Northside Drive, on the left side of this rendering. Credit: newstadium.atlantafalcons.com

It’s not just that the community benefits deal was sent to the Atlanta City Council before the community knew the deal had been finalized.

It’s not just that the state has already removed a big piece of the Martin Luther King Jr. Drive viaduct and rerouted traffic between Northside Drive and Downtown Atlanta along Nelson Street in the Castleberry Hill neighborhood.

It’s all of this, and more.

Holmes rattled off a history of stadiums going back to the original 1966 Braves ball field: 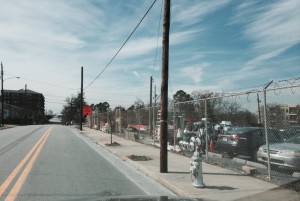 “Here we go again – fool me once, shame on you; fool me twice, shame on me; fool me four times, and I belong in some insane asylum,” said Holmes, who, incidentally, has written his life story and it’s to be released soon by the University Press of America: “From Poverty to History Maker: An Autobiography.”

A different symbolic language was chosen by a lawyer for the residents trying to block the bond sale. Whereas Holmes focused on the wealth divide, Thelma Wyatt Moore focused on the civil rights legacy of a barrier built to enforce segregated neighborhoods.

“This stadium is a new Peyton wall,” said Moore, a retired chief judge of Fulton County Superior Court who was first appointed to the bench by then Mayor Maynard Jackson. “That was an extremely painful period of our history.”

The “Peyton wall,” was compared to the Berlin Wall when it was built across Peyton Road in 1962. Then-Mayor Ivan Allen’s administration actually built two such walls, the other was on Harlan Road, and their purpose was to separate black and white communities at a time an increasing number of middle class blacks were moving into neighborhoods that once were all white, according to the 2005 book by Kevin Kruse, “White Flight: Atlanta and the Making of Modern Conservatism.” 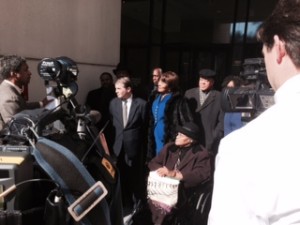 The walls and ensuing controversy thrust Atlanta into the international spotlight. Allen had them taken down following a judge’s order to do so. According to Kruse’s account, Allen later recalled that his predecessor, William B. Hartsfield, had offered this bit of advice – after the fact: “Never make a mistake they can take a picture of.”

Moore said she intends to keep the image of the Peyton wall in the public conversation. The first goal she and her colleague, John Woodham, have taken on for their clients is to block the sale of Atlanta’s stadium bonds and force Atlanta back to the negotiating table. There, the five intervenors hope to revise the terms of the community benefits agreement the Atlanta City Council approved in December, a vote that enabled the bonds to be sold.

Moore isn’t the first to observe that the stadium and closure of the MLK Drive viaduct will increase the divide between Downtown Atlanta and neighborhoods to the west – including the campuses of the Atlanta University Center.

But Moore may be the first to liken the stadium and road closure to the Peyton wall, and thereby rekindle some deeply held emotions.