The tangible elements of a lifelong community, one comfortable for the disabled and well as the aging, are on display through Sunday along Auburn Avenue, in downtown Atlanta. 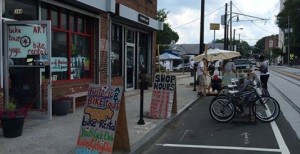 Bicycling is a key component of the Lifelong Community ARC is coordinating this weekend along Sweet Auburn Avenue in downtown Atlanta. Photos: Sweet Auburn Living Beyond Expectations, via facebook

The two-block demonstration project is coordinated by the Atlanta Regional Commission, which has focused the past five years on informing metro Atlantans that the region is graying faster than many realize.

The concept ARC calls a “lifelong community” in a handbook of the same name also has taken the name “tactical urbanism” over the past few years. It’s a branch of the “new urbanism” concept that swept the region during the last decade, when new apartment buildings offered retail on the ground floors and alleys regained popularity.

The idea is to provide densely developed neighborhoods with the amenities people need, shops and drug stores, in a place where a vehicle is less of a necessity. A schedule of events is posted on Facebook.

Bicycles are a somewhat surprising component of the lifelong community. Though bicycling is still somewhat of a rarity in metro Atlanta, and attention to safety is heightened by injuries sustained this week by a Morningside resident struck while riding his bike, older folks comprise a significant number of the nation’s bicyclists.

One of the project sponsors is PeopleForBike, which is funded by Clif Bar. PeopleForBike named Atlanta this spring one of five cities for its Green Lane Project, which ARC defines as a, “two-year intensive program to build better bike lanes to create low-stress streets and build more vibrant communities.”

According to Tim Blumenthal, president of PeopleForBikes: “Today’s older adults are redefining what it means to age. Many are looking for active lifestyles, and cities are changing their streets to meet this demand. People aged 60 to 79 account for 37 percent of the growth in biking over the last 20 years.”

Those figures are of note in metro Atlanta, where ARC has reported some astounding figures about the rate of growth in the older population of metro Atlanta:

Highlights of the Lifelong Community on Sweet Auburn Avenue There’s even a book titled, “Tactical Urbanism,” now in its second edition. The book defines the concept in this section:

“Improving the livability of our towns and cities commonly starts at the street, block, or building scale. While larger scale efforts do have their place, incremental, small scale improvements are increasingly seen as a way to stage more substantial investments. This approach allows a host of local actors to test new concepts before making substantial political and financial commitments. Sometimes sanctioned, sometimes not, these actions are commonly referred to as ‘guerilla urbanism,’ ‘popup urbanism, ‘city repair,’ or ‘D.I.Y. urbanism.’ For the moment, we like ‘Tactical Urbanism,’ which is an approach that features the following five characteristics:

▪                “The development of social capital between citizens and the building of organizational capacity between public-private institutions, non-profits, and their constituents.

The Sweet Auburn project is anything but guerilla.

The projects result from a consensus of recommendations that emerged from meetings in March between ARC officials and residents of the Auburn Avenue neighborhood. Each is intended to enhance the enjoyment of everyday activities.

The project is part of ARC’s Living Beyond Expectations campaign, which it says involves partnership with Public Broadcasting Atlanta and Piedmont WellStar Health Plans.