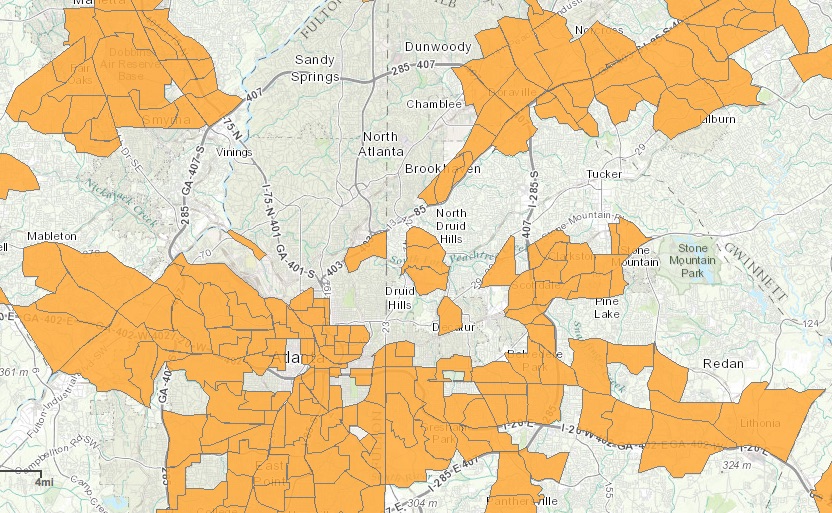 Georgia State University and Morehouse School of Medicine have received a $400,000 federal grant to promote healthier food and physical activity in black neighborhoods in southwest Atlanta, where rates of diabetes and cardiovascular disease are especially high. 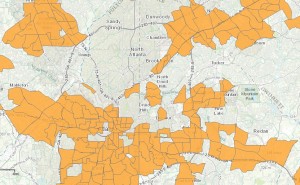 Most of Atlanta’s neighborhoods located south of Buckhead are identified as low income, with low access to grocery stores that provide healthy food, according to the U.S. Department of Agriculture. Credit: usda.gov

In addition, Atlanta is poised to address the city’s food deserts through a $50,000 grant to a program that’s not related to the GSU/Morehouse partnership, a spokesperson for Invest Atlanta said Thursday.

Residents of the neighborhoods to be addressed by both programs tend to have low incomes, low access to a supermarket, and low access to vehicles to get to a grocery store, according to a map released in March by the U.S. Department of Agriculture.

This triple whammy facilitates a diet that typically is short on fresh fruit and vegetables, and long on goods that often are high in salt and fat.

In addition, the lack of adequate sidewalks and parks results in residents getting less exercise than they should, past studies have shown.

“Physical inactivity and poor diet have been identified as the second actual cause of death in the U.S.,” Rodney Lyn, a GSU associate professor of health management and policy and the principal investigator, said in a statement.

“We know that physical activity and food environments influence individual behaviors,” Lyn said. “This project seeks to improve these environments in an effort to positively impact health behaviors and health outcomes among residents.” 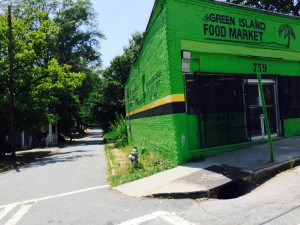 The Green Island Food Market is one of just a few grocery stores near Ormand Street, in southwest Atlanta. File/Credit: David Pendered

Lyn’s group will be working with a team from Morehouse’s Prevention Research Center and the Satcher Health Leadership Institute.

The three-year project was funded by the Centers for Disease Control and Prevention, through a REACH grant. REACH, or Racial and Ethnic Approaches to Community Health, is a CDC effort to address gaps in healthcare access and outcomes for racial and ethnic minorities, according to the statement from GSU.

The project has two components: 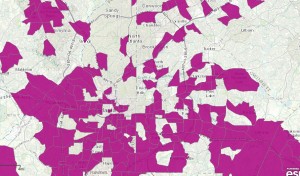 The Census tracts shaded in purple are those in which more than 100 households don’t have access to a vehicle and are located more than a half-mile from a supermarket. Credit: usda.gov.

The project’s goal is to increase access to healthy food for at least 75 percent of residents in the targeted communities. The initiative intends to prevent diabetes and other chronic diseases.

The lack of access to healthy food has been an ongoing issue for many Atlanta neighborhoods south of Buckhead.

Atlanta hoped to help in 2013 from allocations from the New Market Tax Credits program. For the first time, the program enabled recipients to target food deserts. But in Atlanta, no private sector partners stepped forward to ask for assistance to open a supermarket or otherwise address the problem.

Invest Atlanta, the city’s development authority, this year provided $50,000 in grant funding to entrepreneurs who complete a program at the Center of Civic Innovation’s Food Access Lab. The money is intended to fund five or six entrepreneurs who come up with good proposals to help people get food that’s healthy, fresh, affordable, and clean. The money is coming from Atlanta’s proceeds from the federal New Markets Tax Credits program.

In addition, Fulton County has operated a food truck in these neighborhoods, and workers provided healthy foods and taught residents how to prepare them.

A map from the Department of Agriculture shows that most of Atlanta, south of Buckhead, is home to residents with low income and low access to a supermarket.

The median household income in metro Atlanta was $55,733 in 2013, according to the Census.