The tech sector is booming in the metro Atlanta region. The city of Alpharetta, with nearly 700 technology companies within city limits, is the reigning epicenter of innovation for the North Fulton area today. 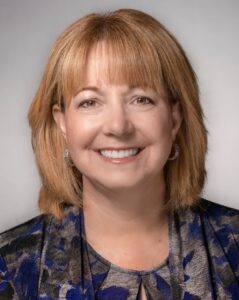 Alpharetta’s evolution from a small farming town in the 1980s to a thriving tech hub was no accident. More than two decades ago, hundreds of miles of fiber optic cables were intentionally laid throughout Alpharetta, and Georgia Power created a series of redundant power networks in the city. This infrastructure, combined with the largest suburban office market in the metro Atlanta area, has since attracted a wealth of Fortune 1000 companies to Alpharetta. Enterprise tech companies such as ADP, LexisNexis Risk Solutions, Fiserv, UPS Supply Chain Solutions, Global Payments, and Equifax, are just a few of the city’s top employers.

The city’s large concentration of tech companies includes nearly 200 IT services companies, more than 50 healthcare IT and medtech companies, 45 fintech companies, and more than 100 software companies. The city’s nearly two dozen data centers and virtual hosting companies, in turn, serve technology and other businesses both locally and throughout North Fulton and the Metro Atlanta region. (Statistical data courtesy of growalpharetta.com). 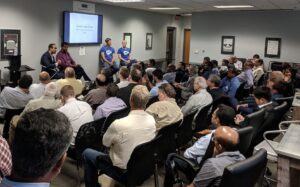 Tech Alpharetta hosted a blockchain event to further the understanding and use of a system of recording transactions and tracking assets. (Photo courtesy of Tech Alpharetta)

One of the drivers behind the city’s economic growth is its vast talent pool, with 65% of Alpharetta’s residents holding a bachelor’s degree or higher – more than double the national average. According to the city, Alpharetta’s daytime population of more than 122,000 equates to 4,632 workers per square mile, besting some of the largest markets in the country, including Denver, Houston, Charlotte, Nashville, Austin, and even Atlanta.

But the tech industry in Alpharetta is linked by more than just the city-wide fiber optic network and its diverse workforce. In partnership with the Alpharetta city government, Tech Alpharetta has helped to connect Alpharetta’s tech companies and create a flourishing, local tech ecosystem, while simultaneously working to grow more tech innovation, companies and jobs for the region.

Tech Alpharetta hosts educational and thought leadership programs for area technology executives and professionals throughout the year. These programs (more than 40 were held in 2020) serve the North Fulton community, while helping to connect the community’s tech companies. The organization also engages local executives from many of these companies on its Strategic Board of Directors, which helps to guide Tech Alpharetta’s growth and to provide infrastructure recommendations to the city. Since its establishment in 2012, the board’s recommendations have led to the launch of Tech Alpharetta’s Innovation Center, the creation of the city’s economic development website, and other notable accomplishments. 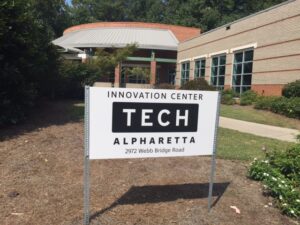 Tech Alpharetta’s Innovation Center is an extremely successful tech startup incubator in downtown Alpharetta. The incubator’s 17 graduates have created nearly 600 new jobs in the City of Alpharetta, and roughly 1,000 overall for the state of Georgia. To foster growth for its startups, Tech Alpharetta provides programming and resources and connects them to area enterprises to help spur collaboration and potential partnerships beneficial to both parties.

Tech Alpharetta’s engagement of local tech companies and their executives helps to make Alpharetta, and indeed, all of North Fulton, ever more attractive to existing and prospective tech companies, and to the skilled tech employees sought by those businesses, while its incubator and programs attract and foster new companies and innovation. Successfully connecting our ever-evolving tech community is a responsibility that we take very seriously, and one that will be key to driving the continued growth of this dynamic tech ecosystem.

Note to readers: Created by the City of Alpharetta in 2012, Tech Alpharetta is a 501(c)6 nonprofit organization focused on advancing technology and innovation in the community.