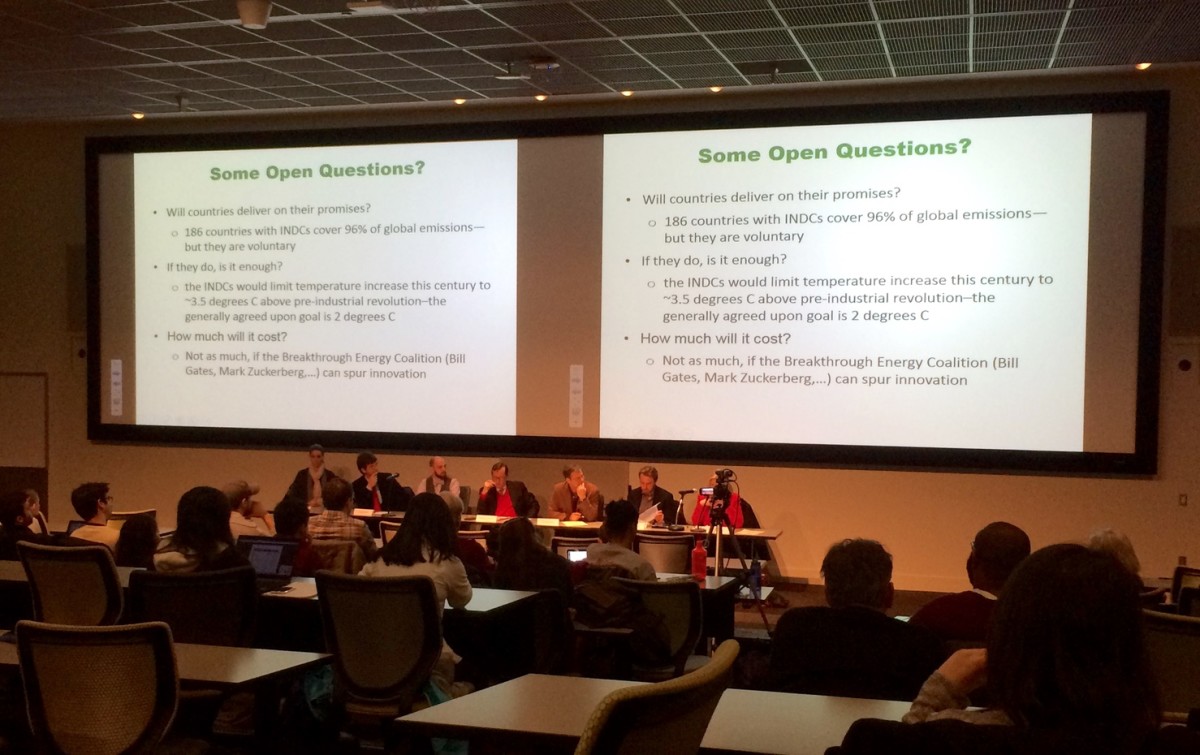 A panel of Georgia Tech professors and a French diplomat expressed support for the climate accord reached in Paris last year. Some noted the devil of implementing it will be in the details. 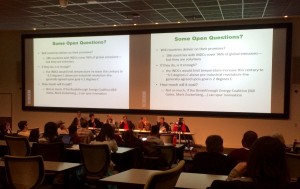 Four Georgia Tech professors and a French diplomat described their views of the Paris climate accord during a forum on the Tech campus. Credit: David Pendered

The topic was COP21, also known as the 2015 Paris Climate Conference. More than 190 countries participated in negotiations that resulted in an agreement to seek to reduce climate change. Atlanta Mayor Kasim Reed attended some events, as did Stephanie Stuckey, who directs Atlanta’s Office of Sustainability.

Barbet began a program in which each professor delivered prepared remarks. A question-and-answer segment culminated the two-hour event.

“COP is just a start, not the end,” Barbet said. “It’s up to civil society to put pressure on politicians in every country to face what is global warming.… It belongs to everyone, from here to civil society, to countries and investors.”

Brown expressed support for nuclear energy as she responded to a question. She noted her concerns about the surge in the use of natural gas to power electricity plants. 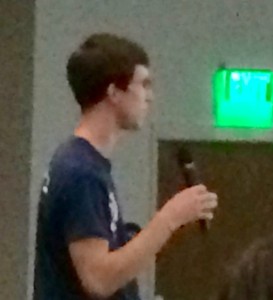 “In countries like the U.S., nuclear is a great option, Brown said. “We have the institutional capacity, and governance, and regulatory authority to build safe nuclear plants.

“A number of nuclear power plant units are being decommissioned,” Brown said. “They can’t compete in the market. They’re having to bid into a market drenched in natural gas; it’s difficult for those to compete. In the south, where we have a vertically integrated marketplace, we can build plants and rate-base they costs. They don’t have to compete.”

Brown was a co-recipient of the 2007 Nobel Prize. The prize was shared by former Vice President Al Gore and the Intergovernmental Panel on Climate Change. Brown provided research through her role with IPCC. Brown wrote a guest column for SaportaReport.com that appeared Aug. 16, 2015.

Here are highlights from the four other presenters in a panel moderated by Alasdair Young, of the Sam Nunn School:

Kim Cobb, climatology: “Does it go far enough? Of course it doesn’t go far enough…. Reasons for hope [include] a very strong call in the COP21 agreement for climatologists to provide information. Our job has really just begun, because we’ll be called to put together the clearest lines of support for the next decade.”

Jerrod Hayes, politics and international relations: “I think we have to reassess how we think about failure in climate change…. The Paris accord gets it directionality righter than before. There’s agreement at the top [that]puts pressure on leaders to change, but gives space to work within their own politics to deliver change from the bottom…. Paris gives us reason for hope.”

Erik Johnson, economics: “I’m optimistic about the Paris summit…. It provides a good framework on how to go about reducing emissions…. Most importantly, there’s no longer a distinction of who’s problem this is…. This is now a group problem…. We are all in this together. 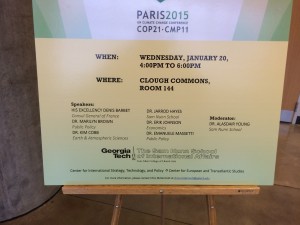 This panel provides information about the speakers and the panel. Credit: David Pendered

Emanuele Massetti, public policy: “I shift a lot on my views; sometimes I see it as a full glass, sometimes as a half-empty glass…. It’s a good agreement to pave the way for future agreements that should do more. The rules of the game make sense…. This may change expectations. If investors change expectations, we may have some emission reductions from just the move in expectations.”

Tech graduate student Alec Lindman asked several questions and lingered after the panel had concluded to talk with the professors. Lindman earned his masters degree from Tech in December and is completing work toward a doctorate degree in physics. Experimental astrophysics is his area of research interest.

“I thought it was a fantastic event,” Lindman said. “It’s really neat to see all these experts we have at Tech who, if you made a special inquiry, you could find them.

“But to have an open forum like this is a fantastic opportunity to see who’s here, and see their interactions, and to be able to participate.”

Previous Article
On the Fence About Purchasing a Home – Now What?
Next Article
Those Left Behind