Reducing the speed limit on Memorial Drive from 35 mph to 25 mph could improve safety, cut tailpipe emissions, boost the roadway’s capacity, and even reduce trip times because traffic would flow more smoothly. 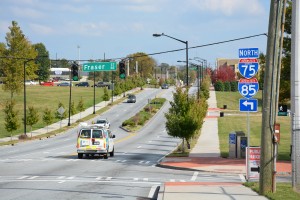 The mothballed Capitol Gateway project, located on both sides of Memorial Drive, is near the western end of the Georgia Tech study of the road corridor. Credit: Donita Pendered

Another startling discovery associated with the analysis of Memorial Drive, being conducted this autumn by Georgia Tech graduate students, is the high degree of buy-in from Atlanta city councilmembers who represent the area.

Councilmember Natalyn Archibong initiated the project and encouraged Tech to allocate a graduate design studio to conduct the analysis.

Archibong provided about $13,000 from her council account to help fund Tech’s analysis. Archibong also propelled the project through the city’s planning department, an effort that ended with Tom Weyandt, deputy chief operating officer for Mayor Kasim Reed, agreeing to authorize the department to provide Tech with an additional $7,500 for the studio.

This level of political support is likely to be necessary if developers are to be wooed to the corridor. Government is likely going to have to set the table for growth, starting with steps to rationalize the number of lanes and improve dysfunctional intersections.

Positive aspects of the corridor include its proximity to job centers in downtown and Midtown. The Atlanta BeltLine crosses Memorial Drive at a node that seems ripe for redevelopment. Plans to improve transit access in the area have long been discussed.

But other than Jeff Fuqua’s planned development along Glenwood Avenue, which now is to be anchored by a Kroger grocery store, and a handful of potential projects, prospects seem slender for equity partners to line up to retool Memorial Drive – as they did in other gritty areas of the city before the great recession.

A tractor happened to be one of a few vehicles that traveled along Memorial Drive Monday afternoon. Credit: Donita Pendered

All that said, consider that a group of Tech students presented their preliminary findings in the atrium of Atlanta City Hall.

This is the same rarefied space in which the city hosts dignitaries and celebrates significant milestones. The setting added a sense of gravitas to the students’ presentation.

Archibong arranged to open the atrium to the students, who on Monday evening presented results of their first 10 weeks of work on the Memorial Drive corridor.

“This is a labor of love, to make Memorial Drive that beautiful entryway to all the neighborhoods that cut across District 5,” Archibong, the District 5 representative, said in introductory remarks. Archibong attended and stayed through the event, as she had at the first presentation, in September, at Drew Charter School.

Archibong likely will be the sponsor of any amendments to the city’s Comprehensive Development Plan, or proposals to retool the roadway and its intersections, that emanate from the analysis by the Tech students.

Oakland Cemetery is a scenic destination on the western end of the Georgia Tech students’ analysis of Memorial Drive. Credit: Donita Pendered

Councilmember Carla Smith also attended and stayed through the event, as she had in September. Smith represents only a small portion of the Memorial Drive corridor being reviewed. But it’s a portion poised for redevelopment, located just south of Oakland Cemetery and north of both Grant Park and Turner Field.

By the end of the year, the students expect to finalize a number of conclusions and recommendations.

The goal is to provide a conceptual framework for the redevelopment of a portion of Memorial Drive – a state roadway that links downtown Atlanta with Stone Mountain.

The students are concerned with a 5.5-mile stretch of the road from I-78/85 to Candler Road. They are working under the guidance of Mike Dobbins, a former Atlanta planning commissioner who’s now a professor of practice at Tech.

Students made a brief presentation, fewer than 30 minutes, in which they presented an overview of the project; transportation improvements that could be made along Memorial Drive; potential designs and developments; and methods of connecting activity centers with better bikeways and walking paths.

The meat of the meeting was the conversations students and stakeholders had before and after the presentation. The actual presentation is available on the project’s Facebook page. But Dobbins said Tuesday the plan already is dated, because students already are contemplating changes based on comments they received in the atrium of Atlanta City Hall.