The pending deal for a new Falcons stadium on Northside Drive ensures the road will be a busy corridor for years to come. 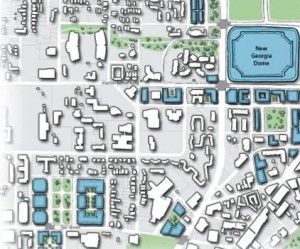 A Georgia Tech study calls for new greenways to be built west of the new stadium as part of a neighborhood improvement program. Credit: Georgia Tech

As that deal comes together, Georgia Tech graduate students are putting the finishing touches on recommendations that intend to transform Northside Drive into a grand transit boulevard. Tech’s study is to be complete in May.

One goal of Tech’s study is to improve east-west connectivity, from Midtown and Downtown into some forgotten neighborhoods to the west of Northside Drive. The study also calls for improving north-south connectivity to provide a strong spine for future development and mobility that will solidify Atlanta’s core center.

Some of these objectives could fit into the package of community improvements that are to be funded as part of the stadium deal that was announced Thursday. Specific details of the proposal being presented to the Atlanta City Council were not immediately available late Thursday.

The tentative stadium agreement calls for the Falcons to provide $50 million for infrastructure improvements related to the stadium – traffic mitigation and pedestrian improvements. The Blank Foundation and Invest Atlanta are to provide a total of $30 million in various types of improvements in the neighborhoods of English Avenue, Vine City, and Castleberry Hill.

Tech’s study makes a number of recommendations that relate to the proposed stadium. All of them are intended to eliminate the perception that Northside Drive is a “social and cultural divide” between the relative prosperity to the east of Northside Drive and the more challenged neighborhoods to the west. 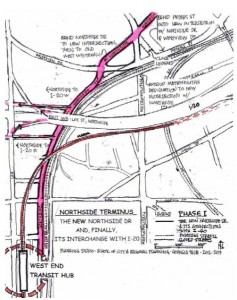 The Georgia Tech suggests a relatively low-cost solution for improving connectivity at the junction of Northside Drive and I-20. Credit: Georgia Tech

The study already is beginning to stir up interest among some urban planners.

Atlanta is interested in pursuing some of the study’s ideas for improving intersections along Northside Drive at key roads including 14th and 10th streets. Georgia Tech is incorporating some concepts into its pending campus-wide and bicycle master plans. State transportation board member Emory McClinton is working to ensure GDOT remains plugged into the project after he leaves the board in April.

The study began in summer 2012 and students have nailed down their major recommendations. Revisions are now underway and those are to be complete in May.

Here are a few of the concepts that relate to the stadium:

The study is directed by Mike Dobbins, a Tech professor of practice and former Atlanta planning commissioner. The work is being done by masters students in fields such as city planning, civil engineering, urban design, and architecture.