Atlanta has become a leading North American hub for the forest products and paper industry — a position that’s becoming more solid every day, partly because of the expansion of the Rock-Tenn Co.

Brad Currey, who joined Rock-Tenn as its president in 1978 becoming CEO in 1989,  marveled at what has happened to the business since he retired as the company’s chairman in 2000. He was succeeded by Jim Rubright, a former partner with King & Spalding who was an executive officer with the pipeline group and energy services company — Sonat Inc.

“Jim has turned Rock-Tenn into the most respected company in the industry,” Currey said after Rubright had addressed the Rotary Club of Atlanta at a luncheon program on Monday. “When Worley (Brown) and I ran the company, we were nipping at the heels of the big companies.”

But Rock-Tenn was still a smaller player in the industry.

Today, Rock-Tenn is the second largest manufacturer of corrugated paper products in the United States and the largest in Georgia. The other big players in the state in that sector are Georgia-Pacific Corp. and Pratt, the U.S. subsidiary of the Australian company — Visy. Both are based in Atlanta. 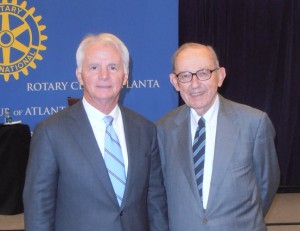 Currey said Atlanta always was an important business center for the forest products and paper industry.

“Now they’re headquartered here, and they didn’t used to be,” Currey said.

“Atlanta is clearly where most the headquarters for the manufacturing companies for the paper and forest products industry are located,” Rubright said, adding that the business sector is vitally important to the state’s economy. “It’s an incredibly sustainable industry. There are more trees in Georgia today than there were 20 years ago.”

Emory business professor, Jeffrey Rosensweig, asked Rubright questions during the program after introducing him to the attendees. Under Rubright’s leadership, Rock-Tenn’s stock has gone from $14 a share to $105 a share. The company’s revenues crossed the $1 billion mark in 1997, and they are now in the $10 billion range with about 25,000 employees.

Rosensweig asked how Rubright had been able to achieve that kind of growth, primarily through acquisitions.

When he started at Rock-Tenn, Currey told Rubright not to try to be Brad Currey. Instead, the former CEO told his successor to find his own way to lead the company, which Rubright said was “unbelievably empowering advice” and let him be free to be himself.

“Rock-Tenn has an extremely strong culture,” Rubright said. So whenever it made an acquisition, Rubright would tell the employees at the acquired company what was expected of them – providing customer satisfaction, making sure products show up on time, reducing the company’s costs and work to continuously improve the company’s operations. If people could not conform to Rock-Tenn’s culture, then they were free to look for another job.

That strategy worked well until Rock-Tenn made a successful bid to acquire Smurfit-Stone Container, one of the world’s largest producers and recyclers of paperboard and a company that was twice the size of Rock-Tenn. The combined company became North America’s second largest producer of containerboard in 2011.

As in previous acquisitions, Rubright informed the acquired company’s employees of Rock-Tenn’s culture and the expectations.

“They don’t change,” Rubright said, adding that Smurfit-Stone had seen so many companies come and go, they probably didn’t take Rock-Tenn seriously. “They never had a defining company culture. In July 2012, we figured it out.”

So many of the Smurfit-Stone executives were asked to leave the company. They were replaced by Rock-Tenn executives who were given much greater responsibilities but understood the company’s culture.

When asked about Rock-Tenn’s plans for international expansion, Rubright said the company will focus primarily on North and South America because he doesn’t see strong business prospects in Europe, Asia or Africa. “We are in China, and we’d like to leave,” he said. “Our competitors have subsidized capital.”

Rosensweig asked how important is manufacturing to the U.S. economy.

“Taking care of one another, healthcare, is not creating value,” Rubright said. “If we want to create value, it’s with manufacturing. If we don’t have manufacturing, we are not creating wealth. I’m glad to see manufacturing sustaining itself (in today’s economy).” But he added: “We have lost 500,000 jobs in the paper and pulp manufacturing industry since 2007.”