The ATL is winning design for Woodruff Park playground

A design has been selected for the new playground in Woodruff Park.

The winner of the international design competition was Jeff Santos of Coquitiam, British Columbia in Canada, which is near Vancouver.

His design is a wooden playscape that spells out ATL in a stylistic letters.

The winning design was selected from more than 40 designs that had been submitted from around the world.

The idea for a playground in Woodruff Park was brought to Central Atlanta Progress (CAP) by the Atlanta Taskforce on Play (ATOP). An area on the east side of the downtown park has been set aside for the playground.

Bank of America is underwriting the playground with a $25,000 gift and the commitment to provide the volunteers needed to build the project.

The playground should be finished sometime next spring.

Santos has been designing video games for the past eight years, but this is the first time he has designed a playground, according to Sara Milton, CAP’s marketing a media manager.

Milton said Santos will be working with CAP, ATOP and Georgia Tech to “refine his design to be more accessible and even more playful,” Milton said. “He was thrilled to win.” 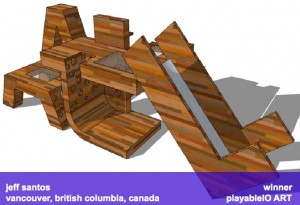