The BeltLine as a resource for redressing Atlanta’s inequity 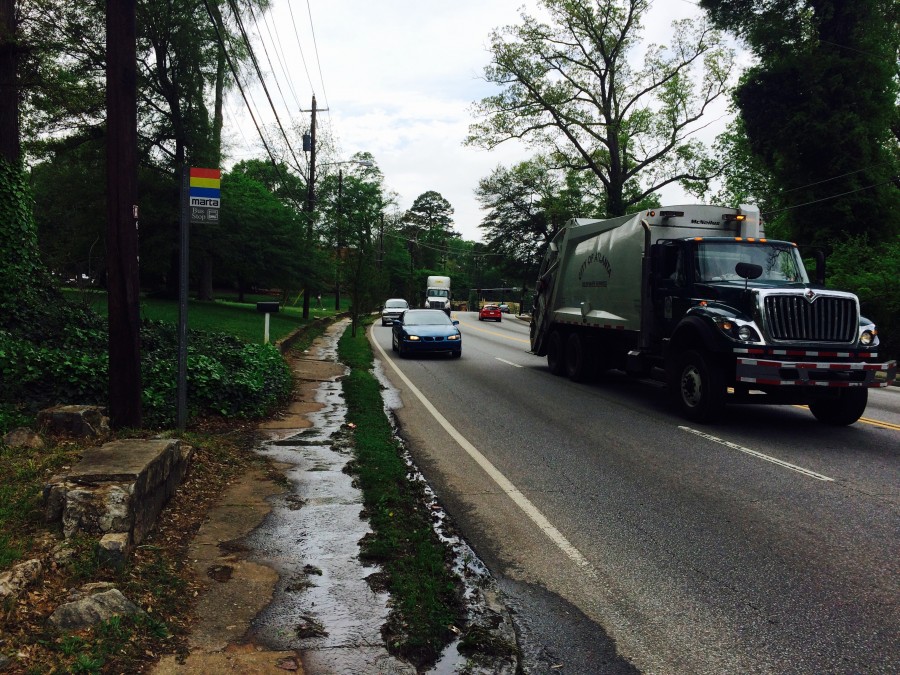 This MARTA bus stop on Donald Lee Hollowell Parkway, near Grove Park, is covered by storm water runoff and has no protection from vehicles passing on the four-lane road. Credit: David Pendered

By Guest Columnist MICHAEL DOBBINS, professor of the practice at Georgia Tech’s School of City and Regional Planning, and former Atlanta planning commissioner

Atlanta has the opportunity and the means to begin to attack the most shameful and enduring blemish on its record among U.S. cities: Greatest wealth disparity (the GINI index) and least chance for low wealth families to climb out of poverty (Harvard-Berkeley study).

Instead of passively accepting or denying this decades-long stain, motivated leadership could take the problem on with a good chance of success. Modest goals, like climbing a few notches out of the cellar, are attainable, and wouldn’t that make this city proud?

There are enough big-ticket projects underway to make it happen. 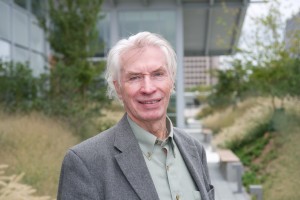 For one, the BeltLine (Atlanta BeltLine, Inc. or ABI) holds a great trove of resources. Their staff is large, skilled and well compensated. Their core funding comes from the city’s largest Tax Allocation District, in place for 10 years already. In addition, they have been able to raise considerable private and foundation funding through the private, non-profit sister agency, the Atlanta BeltLine Partnership (ABLP). More than half of their TAD territory is occupied or flanked by some of the city’s lowest wealth, highest unemployment neighborhoods, whose needs are often at the basic survival level. These are the neighborhoods whose demographics the BeltLine depended on in the first place to qualify for establishing the TAD under the state’s redevelopment powers law.

Yet most of the BeltLine resources to this point have been spent to build amenities and accelerate development that was already happening in the more affluent east and northeast sectors of the city, accounting for some two-thirds of the approximately $400 million spent. 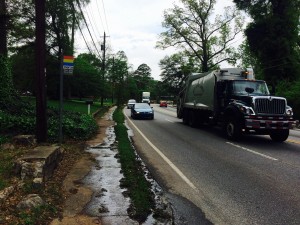 This MARTA bus stop on Donald Lee Hollowell Parkway, near Grove Park, is covered by storm water runoff and has no protection from vehicles passing on the four-lane road. (Photo: David Pendered)

Back in 2005, when the TAD was up for an approval vote by the Atlanta City Council, recognizing the potential for this kind of inequitable treatment in the priorities and use of funds for the BeltLine, last minute lobbying efforts by Georgia Stand-Up and concerned citizens called for the city’s enabling legislation to mandate a Community Benefits Agreement (CBA) and a set-aside for affordable housing.

The council imposed language to that effect. So far, though, there is little evidence of implementation of the CBA, particularly its emphasis on training and employing low wealth or unemployed citizens. And the affordable housing component languishes far short of its goals. Concerned, the council called for an “equitable development plan” in 2009.

Still frustrated with a lack of progress, in 2012 the Council called for an “equitable development plan assessment.” The BeltLine Partnership commissioned that report, which was indeed critical of the lack of equity that characterizes the BeltLine’s priorities and expenditures to date. 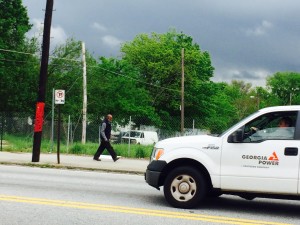 Pedestrians are a common site along Donald Lee Hollowell Parkway, which is a transit-dependent community near the Georgia Dome. (Photo: David Pendered)

According to the BeltLine’s 2013 Strategic Implementation Plan “dashboard,” those projects in the plan that could do the most good for low wealth people – jobs, housing, and streetscapes – are the worst performing elements of the program. So what could be done to address these mandated yet admittedly difficult goals?

Implement a jobs program in conjunction with all BeltLine design and construction activity.

In 2014, nine years after the approval of the TAD, the BeltLine Partnership, the private, non-profit BeltLine-support organization, has developed a health care workers training program with various partners, which has had some success. Recently, the partnership has joined with the Blank Foundation-sponsored Westside Works and state agencies to develop a construction training program.

The BeltLine itself, however, has done little for training or employment of unemployed people in its impact areas, despite the opportunity provided through contracting for tens of millions of dollars of design, consulting, and construction activity. Tenuous and token as they are, the BeltLine should build on and expand its sister organization’s initiatives to ensure that training, hiring, and compensation stipulations are incorporated in all of its design and build contracts. These should set specific targets and accountability measures for including people in the City’s low wealth neighborhoods.

There are many streets and sites within the TAD boundaries, not necessarily related to the trail path, for which committing to public infrastructure improvements in conjunction with and in support of redevelopment initiatives could jumpstart community-based revitalization. 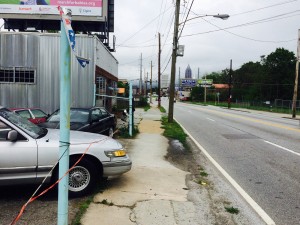 This sidewalk along Donald Lee Hollowell Parkway is crowded by a used car lot and tilts down toward the street. (Photo: David Pendered)

Examples of the use of BeltLine resources that lie inside the BeltLine TAD and are consistent with its goals could include partnerships for revitalization along well traveled yet dismal corridors, like Northside, West Marietta, Donald Lee Hollowell, Joseph E. Boone, MLK, Westview, Ralph David Abernathy, Cascade, Deckner, Avon, Lawton, Peeples, Oakland, Lee, Murphy, Sylvan, Metropolitan, McDaniel, University, Pryor, Hank Aaron, and McDonough, among others. These projects are already included in the BeltLine’s Strategic Implementation Plan. The kinds of improvements that would benefit existing populations would include:

How can the BeltLine pay for all of this?

The principal source of support for acting on community-identified needs and priorities would come from diverting attention away from the BeltLine’s transit aspirations, for the time being. Use the Atlanta Streetcar as a test case, and give it a year to prove its merit or correct its flaws. Then revisit the transit part of the BeltLine program. Putting all transit-related funding on the backburner, including dropping transit “readiness” from future trail design and development, could redirect the some $200 million presently carried over the next four years in the BeltLine Strategic Implementation Plan budget.

At this point, there is no evidence that the current transit concepts and the development projections on which they are based are realistic or fundable. The issues raised in the Atlanta Development Authority’s transit “white paper,” prepared 10 years ago, are just as daunting and unresolved now as they were then:

Yet at great cost the BeltLine continues to plan for and build its trails to be able to eventually accommodate streetcars. A case in point is the three mile Westside Trail, whose $40 million cost is three-quarters due to streetcar “readiness,” which is at best a chancy proposition. Better to have built it as a safe, well-lit forest trail sooner at a quarter of the cost and to have saved the hundreds of mature trees now being toppled along its “streetcar-ready” path. Yet the amount of the expenditure is trumpeted as a win for “equitable” development.

The opportunity is now to use the BeltLine’s resources to reduce the wealth gap and to hold out hope for low wealth citizens along its path. Coupled with the persistent infeasibility of the transit concept, let’s call for taking a breather on the transit part and redirecting energy and resources to where they’re most needed.