So it is, perhaps, no wonder that Ebs Burnough’s documentary about one of the best (maybe) and best-known (certainly) writers of the last century both buries and praises its subject.

With his distinctive effeminate whisper, which never changed, and his equally distinctive physicality, which did — from elfin fallen angel when young to scary self-parody as he aged — Capote the celebrity eventually upstaged Capote the writer. As a result, the perception of him altered, as one interviewee says, from “most lionized writer since Voltaire” to “a sleazy piece of work.” 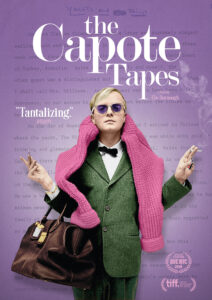 Poster of “The Capote Tapes”

Plimpton, himself a semi-celebrity and Manhattan man-about-town before his death in 2003, had access to a sterling roster of Capote watchers. People like Dick Cavett who had the writer on his ’70s talk show numerous times. Also, Lauren Bacall, Jay McInerney, journalist Sally Quinn (aka, Mrs. Ben Bradlee), Norman Mailer and screenwriter George Axelrod, among others.

And, of course, Capote’s Swans, i.e., society doyennes like Slim Keith and Babe Paley, the ultimate in ladies who lunch, whose jet-set secrets he planned to expose in his last book, “Answered Prayers.”

“Answered Prayers” was never completed, but several chapters were published in Esquire and the result was a kind of unwitting social suicide. These women were not pleased that Capote had exposed their salacious three-martini gossip and they dropped him. Dead. No more cruising around the Mediterranean on mega-yachts. No more glam weekends in the Hamptons.

While the film is very clear about Capote’s fall, it pays equal attention to his rise. As works like “Breakfast at Tiffany’s” and his much-lauded non-fiction novel, “In Cold Blood,” attest, Capote was an exceedingly talented writer. And an accomplished social butterfly. His famed “Black and White Ball,” held at the Plaza in 1966, was probably the event of its kind in the 20thcentury.

Further, he never held his tongue when a vicious bon mot could be dropped. Asked once on a late-night talk show about Marlon Brando, Capote readily acknowledged his brilliance as an actor, adding, in that memorable lisp, “But so dumb he’d make your skin crawl.”

“The Capote Tapes” can be viewed on demand.