‘The Current War: Director’s Cut’ – a ‘dazzling’ yet ‘disappointing’ movie about electricity

A scene from "The Current War: Director's Cut"

As the title suggests, “The Current War: Director’s Cut” is one of those films whose backstory is easily as interesting as the one being told on screen.

Alfonso Gomez –Rejon’s (“Me and Earl and the Dying Girl”) movie was originally shown in at the Toronto Film Festival in 2017. With its A-List Cast and prestigious studio backing (The Weinstein Company), the picture was already generating Oscar talk. 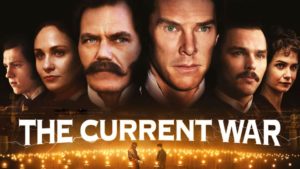 A poster of “The Current War: Director’s Cut”

But then #MeToo broke, as did some less-than-favorable reviews, and “The Current War” headed for the shelf where it sat for almost two years. Then it was rescued by, among others, Martin Scorsese, and Gomez-Rejon, who worked on a re-edit. And THAT, kids, is how a movie that never played theaters before arrives as “The Director’s Cut.”

Collateral damage can be an unpredictable thing.

We are back in the Gilded Age of the robber barons. Everything – from railroad cars to gentlemen’s clubs to elegant restaurants – gleams and glimmers. It is a world of burnished mahogany and red-velvet drapes.

And it is about to be transformed by two men, each of whom feels he has the best version of electricity. One is the preening and celebrated Thomas Edison (Benedict Cumberbatch) whose direct current (DC) is most effective at short distances in crowded urban areas.

The other is Pittsburgh business tycoon, George Westinghouse (Michael Shannon), whose alternating current (AC) is cheaper and excels at long distances. The movie is essentially about their continued rivalry, culminating in two events: Whose current will power the first electric chair, and whose will illuminate the Chicago World’s Fair. 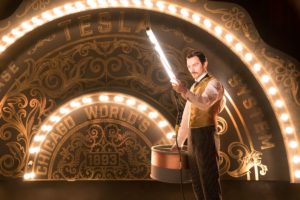 A scene from “The Current War: Director’s Cut”

There’s also the wild card Nicola Tesla (Nicholas Hoult), an eccentric immigrant with his own visions of an electrifying future.

The filmmaker attacks his story with passion and panache. The movie itself seems to move at the speed of light, especially in the first half.

But – yes, gird your loins for more electrical punning – the movie loses juice as it goes along. We’re still enthralled by the characters and by the many ideas the film bounces through.

Still, an hour or so in, the movie starts feeling static, as if we are going over the same territory and in the same manner.  There are only so many times you can shock (sorry) us with a sudden burst of light in the midst of darkness (though I was especially fond of the circular display of Edison’s light bulbs in a dark field, suggesting a lit-up crop circle).

‘The Current War: Director’s Cut” is impressive in so many ways. Sadly, it’s not the movie it could’ve been. But I’ve seen much worse. And so have you.

Previous Article
How is Midtown Going to Handle All of this Growth?
Next Article
Through Metro Export Challenge, Regional Companies Find Success Going Global