The Ginkgo tree shines a final golden glow of fall — showcasing the past, the future and the seasons of our lives

When most of the fall colors of the trees have faded to brown, one tree shines its golden aura on the landscape.

That tree is the Ginkgo tree — uniquely beautiful — especially at this time of year.

One of my fondest memories of the special Ginkgo tree was when I was a teenager. There was a grove of Ginkgo trees overlooking the northern end of the meadow at Piedmont Park. In the fall, the yellow, soft leaves would fall from the tree and blanket the ground. 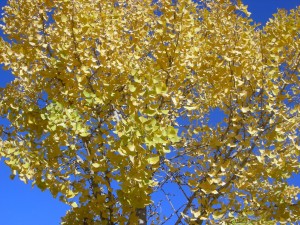 My first love and I would sit or lie down on one of nature’s most comfortable golden quilts enjoying the striking contrast of the golden fan-shaped leaves against a blue fall sky.

At some point — maybe two decades ago, that grove of Ginkgo trees was cut down during a renovation of that section of Piedmont Park. It pains me every time a tree is cut down, but it hurts even more when the victims are Ginkgo trees.

It was my sister, Elena, a landscape architect, who helped me appreciate how special Ginkgo trees really are. We were walking underneath a canopy of Ginkgo trees, and she picked up one of the yellow leaves and showed me how the leaf fanned out from its stem.

Unlike every other leaf I had ever seen, the Ginkgo leaf had no spine and a skeletal structure resembling a tree within a leaf. 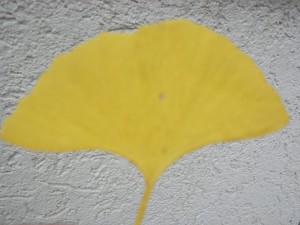 The Ginkgo tree actually is thought to be the oldest species of trees on earth. It is often referred to as a “living fossil” with no close living relatives, and it is thought that the species dates back 270 million years.

The amazingly slow-growing Ginkgo tree is a marvel when it has reached maturity. For a couple of weeks in late fall, when most of the other leaves have fallen to the ground, the Ginkgo tree’s yellow leaves are in their glory — covering the ground with the richness of golden coins.

Another unusual feature of the Ginkgo leaf is that it seems to continue living after it has fallen from the tree. Unlike other trees, the leaves don’t become immediately brittle. Instead they have a spongy, cushiony feel for weeks after they’ve fallen from their dark brown branches.

Every fall, at this very time of year, I’m reminded of my deep love for the Ginkgo tree. And that is what happened this weekend on a couple of nature walks with my two dogs. 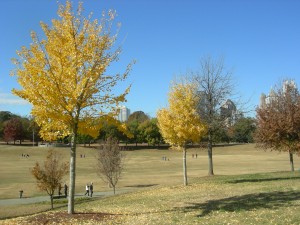 It was shortly after my parents died when my sister and I decided that we should have lasting legacies to remember them in several special ways.

Papa — known to his many friends as Ike Saporta — also was called “Mr. Piedmont Park.” He had been the ultimate citizen activist seeking to protect the beauty and integrity of Atlanta’s premier park.

When he realized the city was about to put a sewage treatment plant on park land along 10th Street near Monroe Drive, Papa led the effort of STOP (Sewage Treatment OUT of Park). Plans also called for the formation of Georgia Lake, which would have transformed the meadow into a lake of combined sewage overflow. 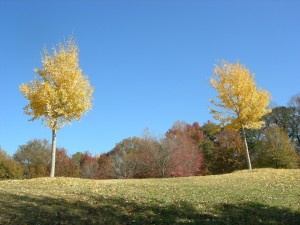 Papa and a band of neighborhood environmentalists and park lovers helped gather 100,000 signatures, which they presented to then-Mayor Maynard Jackson. The mayor loved telling the story of how Papa was the conscience of Atlanta. During that meeting, the mayor called the Department of Public Works to halt the bid process for the sewage treatment plant.

It was a great victory for Papa, a man who was already in his 80s. Before he died, I asked Papa, a well-respected architect, what had been his greatest accomplishment. Without hesitation, he said it had been killing the Piedmont Park sewage treatment plant. 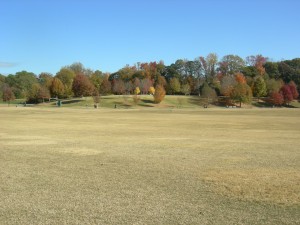 Looking across the meadow at the two Ginkgo trees

For years following that victory, people referred to the area he had helped save as the Saporta Meadow. I still smile when I see what an amazing space the meadow has become.

But it was still missing those Ginkgo trees.

Elena and I then decided that we should contribute two Ginkgo trees to the Piedmont Park Conservancy in my parents’ memory. We were advised, however, that they should be two male Ginkgo trees (it is Midtown after all) because the female trees produced a foul-smelling seed.

So on the hill overlooking the Saporta Meadow, two rather young Ginkgo trees were planted side by side — Mama and Papa — taking in the view of the ever-expanding Atlanta skyline — while growing older together.

Whenever I walk on that hill, I think of Mama and Papa and my love for the Ginkgo tree — appreciating what has come before us and what is yet to come.

Note to readers: After this column was posted, I received an email from Jack Seibert, a senior project manager with CH2M Hill, with an attached photo that he took last week at Piedmont Park just south of the Piedmont Driving Club. The photo is so beautiful that I had to post it for all of you to enjoy.
Jack Seibert also shared his favorite Ginkgo tree story: “In 2009 while working in South Korea, I got my first and only hole-in-one on a golf course with the oldest Ginkgo in Korea. Estimated to be about 800+ years old.”

Second note to readers: I also received an email from attorney Baxter Jones, who took a photo this past Sunday of the Ginkgo tree in front of the Woodruff Arts Center. I’m posting that photo below. 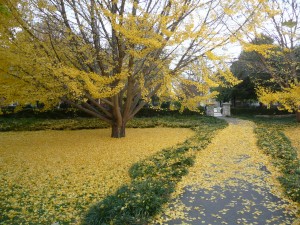 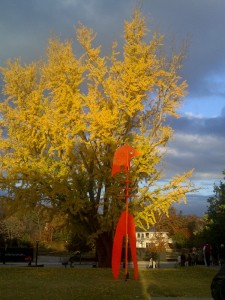