A scene from "The Good House"

“The Good House” isn’t a great movie but until its overly melodramatic final 10 or so minutes, it’s a pretty darn good one.

That’s thanks mostly to the film’s superb leading lady, Sigourney Weaver, and a supporting cast, headed by Kevin Kline, who know what they’re about when it comes to a picture that eschews both superheroes and psycho-killers.

Yes, “The Good House” is about people, some good, some bad, most somewhere in-between. And most of these people have known each other, well, almost forever, having grown up in the picturesque (albeit fictional) seaside community of Wendover just outside of Boston. 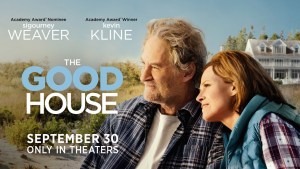 A movie poster of “The Good House”

Hildy Good’s (Weaver) roots go back over 300 years, long enough for one of her ancestors to have been hanged for being a witch. As Hildy dryly notes in one of her many direct-to-camera comments (think Phoebe Waller-Bridge in “Fleabag”): “Women who don’t care what people think end up hanged in the public square.”

Hildy cares what people think. Well, just enough to mask her alcoholism and drive a Range Rover she can’t afford. She’s a successful real estate agent (though her duplicitous former assistant is breathing down her neck), and she knows presentation is a big part of the job. But keeping up appearances is becoming more and more difficult.  Her husband has left her for a man, one of her grown daughters still leans on her for financial support and, geez, nothing helps you unwind like a glass of wine (or three) at the end of the day.

Unfortunately, her drinking hasn’t gone unnoticed.  Her family has arranged an intervention (“If we’re really going to do this, I need a drink,” Hildy cracks). Now she has to do some fairly unspeakable things.  Like face Thanksgiving sober.

Meanwhile, life goes on in Wendover and while it’s not exactly Peyton Place, there’s some unsavory stuff simmering under the town’s magazine-cover surface. Said stuff comes to a boil in the aforementioned overdone finale.

A scene from “The Good House”

But before we get there, “The Good House” is an absorbing and often hilarious character study, of both a woman and a community. Kline is irresistible as Wendover’s all-around handyman who lives like an aging hippie but is probably the richest guy in town. Also effective are Morena Baccarin as a wealthy newcomer stuck in an unhappy marriage and Rob Delaney as a therapist with insight to everyone’s problems but his own.

Still, the film belongs to Weaver whose wry, witty performance is a succinct master class in Acting 101. She’s effortlessly charismatic as a woman whose flaws are somehow part of what makes her so compelling, so completely enthralling.

This is certainly not the movie’s intent, but by the end, you can’t help but think, gosh, it would be so much fun to kick back and split a bottle of wine with her some afternoon.

Or, even better, watch her win a long overdue Oscar.

“The Good House” is available for viewing on demand.