Easily one of the best pictures of the year, “The Green Knight” is an eerie and enchanted fantasy epic based on – of all things – an anonymous 14th-century poem with links to Christian mythology and Arthurian legend. 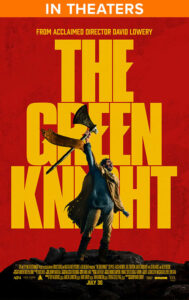 Movie poster of “The Green Knight”

The film is both primal and modern, as distanced from us as a medieval mystery play and as intimately psychological as any movie in recent memory. Director David Lowery (“A Ghost Story,” “Pete’s Dragon”) has pulled off a real coup here; he’s created an utter original that’s redolent of ancient themes, myths and legends. We know this cinematic landscape even though we’ve never been here before.

If you took a college course in English lit, you probably have some sort of nodding acquaintance with “Sir Gawain and the Green Knight.” If not, it doesn’t really matter. Lowery’s movie is a long, strange trip, confident in its own otherworldliness. (It’s also slow; you’ve been warned).

“The Green Knight” begins on Christmas Day. Our hero, Gawain (Dev Patel in a career-best performance), isn’t quite a knight yet, but as one of King Arthur’s sons, he’s expected at court for the celebration. So, goodbye comely young whore (Oscar-winner Alicia Vikanda) and hello Camelot, where in mid-feast, a stranger bursts through the door. Part Ent, part White Walker, part easily-miffed tree from ‘The Wizard of Oz,” the Green Knight (“The Witch’s” Ralph Ineson) issues a challenge.

Anyone seated at the Round Table may strike a blow against him. But, one year hence, the Green Knight will return the blow. Eager to impress his father, Gawain accepts and slices off the visitor’s head. Unfortunately, the Knight picks up said head and rides off, snorting a reminder about next Christmas as he exits. 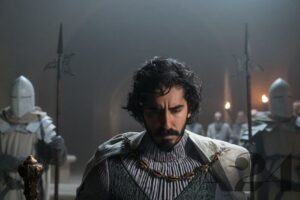 A scene from “The Green Knight”

And suddenly, it is next Christmas. Or almost. Gawain must travel to the Knight’s abode to complete the rest of the bargain. That journey – that quest as the medievalists generally say – makes up the rest of the movie. Gawain’s encounters range from the spiteful to the spiritual, from the inhumane to the inexplicable, but ultimately, he ends up within ax-length of his fate – with a dollop of Ambrose Bierce’s celebrated short story, “An Occurrence at Owl Creek Bridge” tossed in.

There is so much here – from the movie’s magical-mystery-tour tone to pictorial flourishes like Arthur and Guinevere’s crowns which seem lifted straight from the Book of Kells – that, if you’re lucky enough to find yourself on Lowery’s wavelength, scene after scene after scene can be overwhelming.

“The Green Knight” wore me down, wore me out and won me over. Hope it does the same for you.

“The Green Knight” is now in movie theaters, and it is available on Video on Demand.