NEW YORK — The parallels are striking — an unused rail line being transformed into a green, public space. In Atlanta, it’s the BeltLine. In New York, it’s the High Line.

Thousands of New Yorkers and tourists flock to the High Line — an elevated oasis linear park that gives people a respite from the constant street-level conflict between motorized vehicles and pedestrians.

On the High Line, there’s no question of who reigns — people. 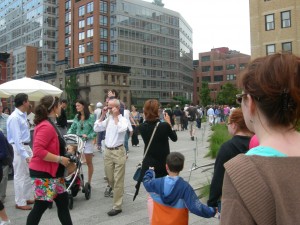 The High Line has been called “Miracle Above Manhattan” by renowned architectural critic Paul Goldberger. Its success is a fabulous sign for Atlanta — the BeltLine appears to be a sound investment for city.

New developments adorn both sides of the High Line. In the lower west side of Manhattan, an industrial, manufacturing area is being turned into a popular new place to live and work for trendy New Yorkers.

In fact, there’s another amazing parallel. At the southern end of the High Line, the renovated Chelsea Market has become a bustling center for high-level retail and eating spots with trendy offices on the top floors. Atlanta-based Jamestown Properties redeveloped the Chelsea Market. 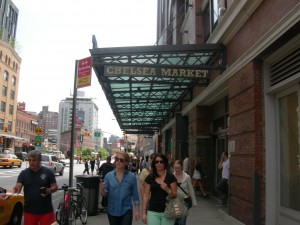 Entrance to Chelsea Market that was redeveloped by Jamestown Properties

Most of the new developments along the High Line have occurred during this economic downturn. All the activities in the Chelsea community seem to defy the gravity of recession that has impacted development across the country. 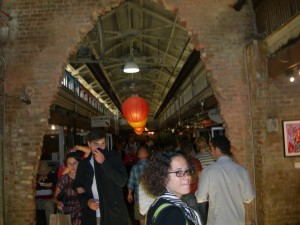 A view inside Chelsea Market

The origins of the High Line dates back to 1934 when a rail line opened aimed at separating trains from the street while being able to serve the factories and warehouses with spurs that roll inside buildings. The elevated rail line is built to ease street-level traffic.

The growing popularity of trucks combined with a decline in the businesses in the area led to the last train running on the High Line in 1980. 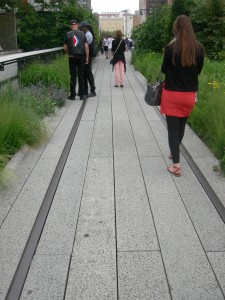 A portion of High Line has rails along the corridor

For years, property owners in the area sought to get the line demolished. Then in 1999, Joshua David and Robert Hammond started Friends of the High Line to preserve the space by turning it into a linear park. Then in 2002, that vision became city policy when the New York City Council passed a resolution to reuse the High Line. 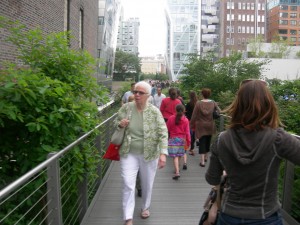 People along the High Line with bordered with natural vegetation

This past Sunday, the popularity of the High Line was undeniable. People of all ages, races and ethnicities were drawn to the space — strolling along the High Line — a mile long stretch that provides a myriad of views of the city.

Unlike the Atlanta BeltLine, the High Line is only for pedestrians. There are no bicycles or skateboards or roller blades. And unlike the BeltLine, there are no plans to combine the walkway with a streetcar line — providing a corridor of alternative transportation. 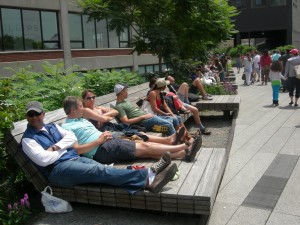 Another difference between the two projects is the difference in density in Atlanta and New York. The High Line corridor is narrower than Atlanta’s BeltLine, which would have made it impossible for it to accommodate cyclists and streetcars.

But one extremely attractive feature of the High Line — and one that would be smart of the Atlanta BeltLine to replicate — is the use of wildflowers and natural vegetation. 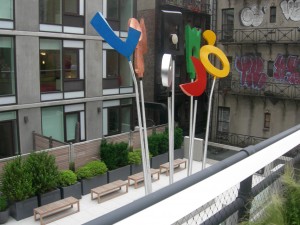 Art along the High Line

There are few areas along the High Line that feel overly manicured and sterile. Instead, the space feels lively and organic — apparently making it relatively easy to maintain.

Another wonderful feature is the amount of street art — from sculpture to paintings that enliven both sides of the High Line.

As an Atlantan, walking along the High Line lifted my spirits.