‘The Irishman’ – director Martin Scorsese’s latest film not his best

A movie poster of "The Irishman"

Maybe I’m all Martin Scorsese’d out.

After all, I’ve been watching his movies for almost half a century.

But “The Irishman,” which I’d hoped would be his piece de resistance, his final say on what he had to say about the gangster genre that, with few exceptions, he pretty much owns, didn’t do it for me.

Rather, it only reminded me of other, better moments in his earlier, better films. Especially “Mean Streets,” “Casino” and “Goodfellas.” 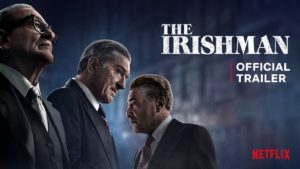 A movie poster of “The Irishman”

The movie is based on Charles Brandt’s book, “I Heard You Paint Houses,” which is wonderfully innocuous Mob code for, “I understand you whack people.”  The “painting houses” is the blood on the walls and floor that such jobs typically leave behind.

“The Irishman’ begins with a long slow pan that echoes the far more glamorous through-the-back-door nightclub entrance in “Goodfellas.” Only this time, Scorsese is taking us through a slightly rundown nursing home to meet elderly former hitman Frank Sheeran (Robert De Niro), who claims to be the guy who killed Jimmy Hoffa, the high-flying Teamster president who went missing in 1975 and was finally declared dead in 1982. (Side note: his body was never found).

Before he was, well, married to the Mob, Sheeran was a former G.I. who drove a delivery truck. Sometime in the mid-50s, he meets Russell Bufalino who helps him with a bad carburetor (or something like that). But Bufalino is more than a nice-guy mechanic. He’s the boss of small but consequential crime family that pretty much runs Northern Pennsylvania.

And that, Sheeran explains, is how he met “what was going to be the rest of my life.”

Eventually, Bufalino introduces him to Hoffa (Al Pacino) who takes a shine to Sheeran. He makes him his buddy and sometime bodyguard. And Scorsese uses their relationship as a way to examine how things worked in the second half of the 20thcentury – at least, that is, in the Gospel According to the Mafia.

Is it the truth or a string of colorful tall tales? It doesn’t really matter. What does matter is how Scorsese and his regulars approach this familiar territory. How, when the movie is working, they invest it with a cruel poignancy and dark humor. How, when it’s not, we’re left with a watered-down Greatest Hits from the director’s other movies. 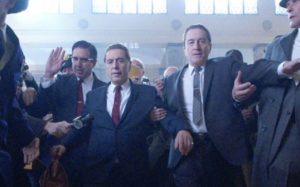 A scene from “The Irishman”

Two aspects of “The Irishman” have attracted a lot of attention even if, strictly speaking, they aren’t essential to its overall effectiveness. One is the Netflix kerfuffle. Netflix paid for the movie (a reported $160 million) and after a brief run in theaters, the picture will be available on Netflix on November 27. This has caused some consternation.

So, too, has Scorsese’s decision to digitally de-age his leads. It doesn’t really work, but it doesn’t stop the film cold, either – though you may experience some “Polar Express” PTSD.

Pesci, who came out of retirement to do the movie, is easily the best thing in “The Irishman.” We expect the peppery, near-lunatic energy he brought to Goodfellas” and “My Cousin Vinny.” Instead, his mobster is a menacing yet essentially benign presence. And you realize, in retrospect, how much of the heavy lifting Pesci did in their earlier movies (toss in “Raging Bull,” too). His explosiveness gave De Niro breathing room for his particular off-center mannerisms. Here, the chemistry is off.

Of course, even second-rate Scorsese is still worth your attention, especially if you’re an acolyte. A certain melancholy hangs over the movie that somehow slides over into a respectful melancholy for all these excellent artists nearing the end of their careers.

But truth be told, by the end of three-and-a-half hours, I still didn’t care who killed Jimmy Hoffa.