A scene from "The Lost City"

Formula done right is one reason the lightweight romantic romp, “The Lost City,” works. Another is the unassuming, easy-going chemistry between its two leads, Sandra Bullock and Channing Tatum.

Bullock plays Loretta Sage, a romance novelist whose best sellers have handed her a house worthy of a Nancy Meyers movie, but whose heart remains locked down, having been widowed several years ago. 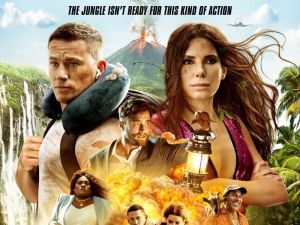 A movie poster for “The Lost City”

However, not all her fans are middle-aged women – or, as the picture condescendingly terms them, women in their 30s who wish they were in their 20s. Her books have also attracted the attention of Abigail Fairfax (Daniel Radcliffe), a rich-kid nut job who thinks the writer can help him find the titular lost city and its accompanying treasure.

To that end, he kidnaps Loretta and, just like that (as Carrie Bradshaw devotees might say), Loretta is unwillingly caught up in an adventure worthy of one of her romance novels.

Enter our hero. Not, at first, Loretta’s would-be rescuer, Dash, who is smitten with her, but a dashing guy named Jack Trainer, played with hilarious derring-do by Brad Pitt.

Pitt’s only on board for an extended cameo, but he wakes the movie up, so that, despite its obvious debt to older, better romantic comedies/adventures (“Romancing the Stone” being the most obvious model), the picture settles into its own entertaining groove. Bullock and Channing are both dedicated, adept performers who realize they aren’t recreating “The African Queen,” but give the uneven script their best shot. And their best is a good deal better than good enough.

There’s some welcome feminist humor (“You mean I’m the damsel in distress” Dash demands at one point) that blends well with the film’s more traditional tropes. And everyone seems to be in the same movie, though Radcliffe’s character sometimes edges into over-the-top Austin Powers villainy (the script’s fault, not the actor’s).

A movie like this can go wrong in so many ways and, until Pitt shows up, it occasionally does.

Still, there’s an unforced breeziness here – a welcome self-awareness that pulls off the seemingly impossible. Namely, a film that plays by Old School rules without coming off as dated or dumb (well, not too dumb).

Bullock, Tatum and company haven’t reinvented the wheel, but they’ve greased it just fine. Let’s be grateful for small pleasures.

“The Lost City” is currently in theaters, and it is also available for streaming on Paramount Plus.