Eleven is a powerful number on my family calendar. Both my children were born (unscheduled) on the 11th. On that day of the month, my husband was diagnosed with diabetes, and his mother died. And then there’s Sept. 11, and the Japan earthquake on March 11.

So yes, when it comes to the number 11, I do have confirmation bias.

“That’s when you start to notice something you think is special and then you notice more of it,” said Emory University mathematician Michelangelo Grigni. “You’re looking for the evidence of something, not evidence against it. That’s how a lot of human ideas get started.”

We were talking about 11 – “a small enough number that you can notice it occurring,” said Grigni, an associate professor of mathematics and computer science. “From a formal mathematical point of view, there’s not that much special about it. More interesting is the psychology – why it means more than other numbers.”

Why 11? Grigni pointed out these cultural factors:

• Biblically, 11 is the number of disciples after Judas betrayed Jesus. “Some people consider it sinister for that reason,” Grigni said. In that vein, there’s a horror movie premiering Friday called “11-11-11.”

• When we learn to count, 11 stands out as “the first number you can’t do on your fingers,” he added.

• In a visual array, 11 must be consciously counted. We easily determine that a basketball squad of five is on the court, but not that a football team is complete. “For 11, you have to count. It’s a little bit out of our comfort zone.”

Grigni also mentioned the catchphrase, “Take it to 11.” In “This is Spinal Tap,”
the 1984 mockumentary of the world’s loudest band, guitarist Nigel Tufnel (played by Christopher Guest) explains that his amplifier knob goes to 11 for “that extra push over the cliff.”

“Why don’t you just make 10 louder and make ten be the top number and make that a little louder?” he is asked.

For that reason, some Spinal Tap fans are celebrating Friday as Nigel Tufnel Day.

In Atlanta, one local TV station has been little by little – one random act of kindness at a time – turning 11 into a symbol for unity and courtesy.

On Friday, WXIA-Channel 11 will be “taking it to 11” with upwards of 11,000 schoolchildren and interested adults expected at the Georgia Dome for a celebration of kindness and service. 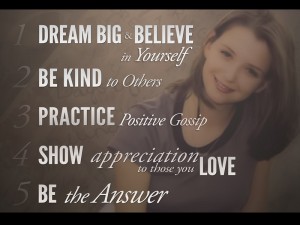 The message of Rachel's Challenge, named for the first victim of the Columbine shooting and based on her journal writings.

WXIA-TV producer Sharisse A. Scineaux explained that the two-hour event is 10 am to noon, intentionally sandwiched around 11 am.

Their event is grounded in two historical milestones, one famous and the other gaining cultural momentum.

One hour is devoted to Veterans Day, which began when the 1918 armistice that ended World War I hostilities between Germany and the Allies took effect in the 11th hour on the 11th day of the 11th month.

“Veterans Day is a natural link for us,” Scineaux said. “Who among us gives more selflessly and kindly than those who put their lives on the line to defend our freedom?”

The other hour has nothing to do with the number 11 (whew), except that general manager John C. Deushane got Channel 11 behind a cause he personally supports as a national advisory board member for Rachel’s Challenge.

Rachel’s Challenge is a national movement to spread the value of compassion, especially among school kids, but we can all benefit. Rachel Joy Scott was the first victim of the 1999 Columbine shooting.

In a paper about personal ethics, she had written: “I have this theory that if one person can go out of their way to show compassion, then it will start a chain reaction of the same. People will never know how far a little kindness can go.”

The simple symbol for the 11-11-11 event, and Channel 11’s ongoing “Add to the Chain” campaign of kindness, is the paper chain. 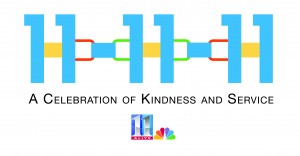 On a slip of paper, sign your name to commit to compassion. Tape or staple the end. This is your first link.

On a second slip, write a note about a kind act performed by or for you. Link this to the chain.

No one has been more involved in 11-11-11 than Scineaux, who for more than a year has covered acts of compassion for Channel 11. The assignment has soothed and smoothed decades of occupational exposure to violence and turmoil.

“I’ve worked in TV more than 20 years all over the country, and for all but one station in Atlanta, and after you get to a certain point, crime and mayhem and fires start to blur your vision,” Scineaux told me. “This campaign has been completely refreshing because it brings light and joy to people’s lives.”

“Absolutely,” she said. “I’ve always been a giving, effervescent person, but this has taken it to a new level.”

On Friday, when it comes to taking it to 11, consider showing compassion – and keep going.