The next caravan: Facing a future our politics has failed to grasp 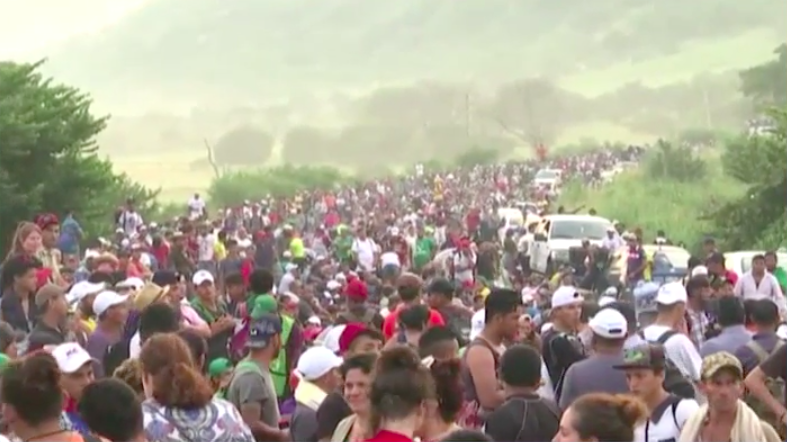 What Ralph McGill so clearly described 60 years ago as “the crop of things sown” is coming in again right before a big election, so the human tendency is to focus on how the mayhem of the last week will affect the upcoming vote.

That, sadly, is the least of it. For many voters the election is already over. The murders in Kentucky and Pennsylvania and the arrest of the accused pipe bomber in Florida will probably motivate some to vote who wouldn’t have, but this year that is a dwindling pool. History will likely view this election as a minor detail of a longer, grimmer harvest.

Anyone who is concerned about the migrant caravan in southern Mexico or shocked by the massacre which the caravan touched off in a Pittsburgh synagogue — a description which covers the spectrum of American political opinion — needs to take a second, sober look at the report of the United Nations Intergovernmental Panel on Climate Change, released earlier this month.

Maybe 91 scientists from 40 countries analyzed more than 6,000 scientific studies and got it wrong.  If they haven’t, then the caravan which has become a political issue in this election is a mere ripple compared to the tsunami ahead.

The report envisions a time not far in the future when rising sea levels and collapsing tropical economies will make national borders “irrelevant,” driving waves not of thousands but millions of refugees.

The migrants in the caravan making its way toward the U.S. border today are driven by lawlessness and poverty in the Central American countries they are fleeing, but these conditions will grow far worse in a decade or so if the report’s predictions are accurate. It’s also safe to predict that if they do, so will the racial hatred and domestic terrorism which marked last week.

This is a larger threat than our politics has shown the ability to grasp. Of the thousands of political ads which have aired across the United States during this campaign season, you’ll be hard put to find many that mention climate change or the catastrophes that could come with it.

In his 2015 book, “Black Earth: The Holocaust as History and Warning,” the historian Timothy Snyder argues that Adolf Hitler’s antisemitism was driven by his environmental obsessions. They were at least interconnected. Hitler believed that by introducing ideas of morality which interfered with the natural, brutal competition between races, Jews threatened to extinguish the human species. He coveted the lands to Germany’s east because he was convinced no agricultural improvement could meet the needs of a rising population.

Hitler hated the Jews not because they didn’t mean well, but because he believed they’d introduced the very idea of meaning well. Robert Bowers, the accused shooter in the Pittsburgh synagogue massacre, appears to have picked up the idea on an online chat group that the Hebrew Immigration Aid Society (HIAS) is behind the migrant caravan. This led to the twisted conviction that his own race was in danger of genocide, and he had to do something about it.

“It was not the face of villainy I thought I’d see,” said a congregant from the Tree of Life Synagogue who sat on the front row for Bowers’ first court appearance Monday. It seldom is.

A long-haul trucker who owned his own rig, Bowers comes off as another of those shooters who attracts almost no attention before committing mass murder. Remarkably few personal details about him have emerged in the two days since the shooting, but one stands out. According to some reports, he was raised by his grandparents and lived with his maternal grandfather until he died three or four years ago.

This is not the first time we’ve heard of a shooter with few human connections who has lost a close relative in the recent or fairly recent past. One example is Nikolas Cruz, the Parkland High School shooter. His mother has been called an enabler for allowing him to own a gun, but he didn’t use it until a few months after she died.

How many more alienated souls are there out there, who but for one human connection would be bent on bloodshed?

Guess who’s not the lead story of this primary?