The only girl in a room of coders 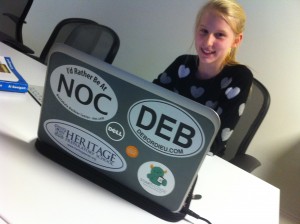 Atlanta is home to 13,000 technology companies, and the Metro Atlanta Chamber says the tech sector will invest $1 billion in Georgia the next five years. It’s a rosy picture for young people who are learning to code.

Unfortunately, too few are girls. Those who are trying to break into the boys’ club are facing a pioneer’s uphill, often lonely climb.

Madeline Busse has been learning to code for more than a year.

Those who succeed “are the rainbow unicorns,” said Caroline Busse, who helped her sixth-grader Madeline find a coding class near their home in Druid Hills. “I tell her when you are the only female in the room, that’s a good thing. You’re going to be valuable.”

Breaking into that room isn’t easy.

I knew little about the coding world before November, when my teenaged daughter started looking for a way to understand the basic languages of computing. That month, the no-girls-allowed message went viral after a blogger criticized the children’s book, “Barbie: I Can Be a Computer Engineer,” in which the famous doll tries to create a video game, unleashes a computer virus and must seek help from two boys who know how to code.

Parents like Busse and me know our daughters are no Barbies. They are blessed with analytical, puzzle-solving brains in an era dominated by big data. “Coding is a necessary skill and the schools are not teaching it,” said Busse, whose daughter attends Heritage Preparatory School. “It’s going to be a differentiator, because it’s going to be in every profession. It’s the language of the future like Latin is the language of the past.”

Busse mentioned an organization called Girls Who Code, which supports training young women for tech careers. According to the Girls Who Code website, the U.S. Department of Labor projects that by 2020, there will be 1.4 million computer specialist job openings, and American universities are expected to produce only enough qualified graduates to fill 29 percent of these jobs. Women don’t naturally flow to that field: While 57 percent of bachelor’s degrees are earned by women, just 12 percent of computer science degrees are awarded to women.

“Coding is like a foreign language; if you start it early, it makes a huge difference for kids,” said Busse, who took some computing courses as an Emory undergraduate before majoring in accounting. “If you don’t offer it until high school, it’s almost too late.”

The gatekeeper is often male

The first attempt to find a coding instructor wasn’t encouraging.

“You are welcome to stop by for a few minutes and see a class in session,” Scott Blanck, a local coding instructor, emailed me after I inquired on my child’s behalf. “Then we can show you and your son some of the material and how we normally do class.”

That didn’t dissuade us, partly because most of my career was spent in sports journalism, and challenging assumptions can help culture change. Blanck turned into a super-helpful source for my daughter.

In some Start:Code classes for elementary students, the majority of participants are female. Photo provided by Start:Code.

A father of two (including a daughter), he reinvented himself, leaving a successful IT career to become an entrepreneur offering fun, flexibly-scheduled coding classes for kids. His business, Start:Code, draws mostly boys and he’s trying to change that. The “brogrammer” culture is hurting boys and girls, and he is offering more gender-free puzzles instead of boy-centered projects like tank building.

“The good news is that in our elementary school classes, we have a lot more girls,” he says. “We see them enjoy coding and connect with it, and they want to continue. One thing that helps is that all kids love games, and gaming has become universal. It used to be a boys club, sitting in front of the PC, but now it’s become universal with the explosion of mobile technology in your pocket and on a tablet.”

Reaching out to girls can be tricky, he said. He works hard to ask broader questions that are supposed to help engage female students, such as, “How can we help someone with this code?”

He sees the tech-gender issue pop up frequently. At the National Tree Lighting, for example, Barack Obama noted that young women from every state used their coding skills to control the colors and patterns of the tree lights. “That’s great for helping girls, but what about boys? Do boys not want to see the lights?” Blanck said. “A lot of kids need opportunities, and we’re trying to find stuff that appeals to everyone.”

Blanck introduced me to Shaine Garcia, 19, who grew up in Kirkwood, learned to code from him and interned at Start:Code. She learned coding languages such as Scratch, Python and Java, and now majors in interactive game design and development at Savannah College of Art and Design (SCAD).

Shaine Garcia, a coder majoring in interactive game design and development at SCAD.

“I was always a big buff about video games, and thought it was a really hard and scary field to get into,” she said. “After taking his class, I realized it’s not very complicated. It’s actually fun.”

Learning to code made her more aware of how games are made and the importance of adding a female voice to the creative process.

“My favorite game has been the Assassins Creed series, but I decided not to follow it because they don’t have any female main characters. In the multiplayer section, they said the females were too hard to program. How much harder can it be to program one image? And why should I support that?” she said. “My new game is Dragon Age Inquisition, which is a really great representation of men, women and other creatures; it won Game of the Year, which should be an alert to other companies about games that we want to play.”

This journey and the Barbie controversy led to another local source: Casey Fiesler, a doctoral student in human-centered computing at Georgia Tech. She reworded the Barbie book’s dialogue to make the opposite point: women belong in tech and coding.

To that I say amen. And point out the creative, humorous way she made the point by changing the book’s dialogue:

“If girls start making video games, they’ll take out all the hot chicks,” mutters Ken. “And they’ll all be about puppies and picking out hair styles.”

Previous Article
A disconnect: climate change and the environment at the state legislature
Next Article
At war with terror, on the front lines of comedy