Mark Rylance stars in "Phantom of the Open"

You don’t need to know Jack Nicklaus from Jack Nicholson to enjoy ”The Phantom of the Open,” a quirky British underdog comedy in the tradition of mid-century Ealing movies. A scene from “Phantom of the Open”

Based on a true story, the film stars the inimitable Mark Rylance (“Bridge of Spies,” “The Outfit”) as Maurice Flitcroft, a blue-collar shipyard worker in the almost-too-aptly named Barrow-in-Furness. Lay-offs are looming and, in a kind of Deus ex remote, the soon-to-be-unemployed Flitcroft happens to catch a televised Tom Watson on the 18th green, landing his last putt to win the British Open in 1975.

A star isn’t exactly born, but a passion is. Flitcroft, who’d never touched a golf club in his life, is gob smacked. The local club won’t have him, but that doesn’t stop him from hitting balls anywhere and everywhere he can. On the beach.  By the highway. You get the idea.

His wife Jean (the always welcome Sally Hawkins) is supremely supportive, as are their twin sons, James and Gene (Jonah and Christian Lees), would-be world disco champs. Less enthusiastic is Maurice’s stepson, Michael (Jake Davies), who is also an executive at the shipyard. He’s the one who warned Flitcroft about the impending job cuts.

A true naïf and a cockeyed optimist to boot, Flitcroft somehow blunders his way into the 1976 Open where, in a memorably droll sequence, he shoots a record-setting 121 in his qualifying round. 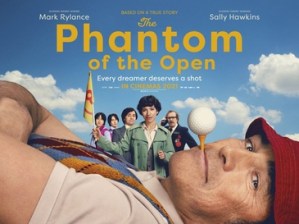 Poster of “Phantom of the Open”

The officials aren’t amused but, in the tradition of full-blown British eccentricity, everyone else is. A kind of folk hero is born, and Flitcroft gatecrashes the Open several more times, using a variety of aliases and disguises.

Unfortunately, the film peaks about halfway through as it chronicles Flitcroft’s unlikely celebrity. However, director Craig Roberts and screenwriter Simon Farnaby (of “Paddington 2” fame; I’m not kidding; check it out) know that just about all they have to do is keep the camera on Rylance, and they’ll be fine.

And Rylance, of course, is more than fine. Like Alec Guiness, he’s one of those miraculous shapeshifters who is never quite the same in any role. One somehow expects him to turn up at a “Star Wars” cantina next. If nothing else, he deserves those kind of big franchise bucks.

Until he does, let’s hope the different movie roles keep coming.

“The Phantom of the Open” isn’t a classic, but it’s an affectionately off-kilter crowd-pleaser, and sometimes, that’s all you need.