‘The Prom’ – Not Meryl Streep’s finest moment or movie

A scene from "The Prom"

“The Prom” proves even Meryl Streep can make a mistake. 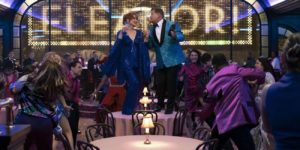 A scene from “The Prom”

For that matter, so can James Corden, Kerry Washington, Nicole Kidman and Keegan-Michael Key.

Based on a hit Broadway musical, the movie is meant to be a “fun” commentary on everything from washed-up stars to small-minded Midwesterners. What it mostly is, however, is a teeth-gratingly overdone bit of mindless glitz.

It was bad enough when it workshopped here a few years ago at the Alliance Theatre. But add in the over-the-top and talentless Ryan Murphy (“Hollywoodland”) as the director and what’s on screen is beyond appalling.

Here’s the premise. Nice lesbian Emma (Jo Ellen Pellman) wants to take her girlfriend Alyssa (Arianna DeBose) to her Senior Prom, but the uptight school board isn’t having it. 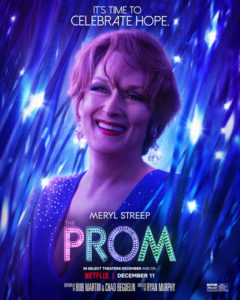 Movie poster for “The Prom”

Meanwhile, in a galaxy far, far away (i.e., Manhattan), a gaggle of Broadway almost-has-beens has just crapped out with their newest show. Somehow, they get wind of Emma’s predicament and decide they’ll swoop into Middle America and get its mind right. Oh, and if they get just the teeniest bit of good publicity for their selfless deed, well….

Yes, lessons are learned, and hugs exchanged and there’re even some fair-to-middling song-and-dance numbers. But mostly “The Prom” is a preening self-satisfied mess. The theatre in-jokes are flat and the stand on behalf of tolerance rings hollow – as hollow, actually, as our Broadway Babies’ own actions.

With Broadway dark thanks to Covid19, we could all use a little razzle-dazzle. But “The Prom” is more like what happens when your wet dog comes inside and shakes itself off.

“The Prom” is available for viewing on Netflix and in metro theaters.