As of this writing ­– a full week later – people are still talking about “The Incident” at the 94th Oscars.” Everyone from my in-laws in North Carolina to my fabulous dentist (Dr. David Hochberg at Colony Square) has brought it up. I brought it up myself with Richard Zoglin, a former AJC colleague who spent the last 30 or so years at Time Magazine where he was an editor and the resident theatre critic.

Zoglin is also an author with brilliant books on stand-up in the ‘70s, Bob Hope (“Hope: Entertainer of the Century”) and, most recently, “Elvis In Vegas: How the King Reinvented the Las Vegas Show.” It was his expertise on Hope, who hosted the Oscars 19 times that I needed. If Hope had, hypothetically, been the host, wouldn’t he have smoothed things over with a quip or some sort of lighten-up-guys intervention?

“It’s so hard to imagine anything like that happening in Hope’s era,” Zoglin emailed. “But yeah, he would have had a line. After a gate-crasher interrupted the 1962 ceremony, walking onstage and giving Hope a bogus Oscar, Bob had a great one: ‘Who needs Price Waterhouse? All we need’s a doorman.’ 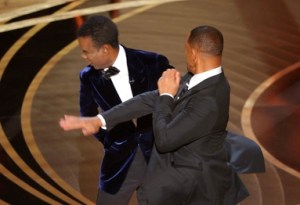 “BTW, Chris Rock is now my hero…Handled it really well, even got off a good line – ‘the greatest night in the history of television.’ Which it almost was.”

Carmichael went on to say he’d made a vow to himself not to discuss it anymore. “Then Lorne (Michaels) came into my dressing room. He said the nation needs to heal…And you want me to do that? The nation doesn’t even know me. I have to be the least famous host in ‘SNL’ history.”

But even that crack wasn’t, well, clean, evoking, as it did, Jada Pinkett Smith’s (i.e., Mrs. Will Smith), enigmatic Instagram post from earlier in the week, “This is the season for healing. And I’m here for it.”

The Season of the Witch might be more like it since her husband was seen laughing at Rock’s joke about Pinkett Smith filming “G.I. Jane 2,” a reference, apparently, to her shaved head. (The actor has alopecia, which causes hair loss). But, as we used to say about royalty, she was not amused and seconds later, Smith bounded on stage and physically assaulted Rock.

Smith won Best Actor about 40 minutes later for “King Richard” and gave a tearful speech in which he apologized to the Academy and to the audience, but not to Rock. That apology came the next day, along with the Academy’s condemnation of “The Incident” and conflicting reports as to whether there was any attempt to remove Smith from the room. Then the whole thing burst loose, with cultural analyses that ranged from so-called toxic masculinity to black-on-black violence to the perilous state of stand-up comedy.

Co-host Amy Schumer claimed she was “triggered and traumatized.” Jim Carrey was “sickened.” Questlove, whose “Summer of Love” won the Oscar for Best Documentary, the category Rock was presenting, claimed he missed the whole thing because he was meditating before his name was called out, trying to remind himself to thank his mom and dad if he was the winner.

By the end of the week, Smith had apologized some more and resigned from the Academy which, nonetheless, is going ahead with a formal review, the results of which will be announced in mid-April.  The implication, it seems, is that by smacking Rock, Smith smacked the Academy, embarrassing it in public and sullying its, um, image (if that’s possible).

And Russia is still messing with Ukraine. Now that’s the smackdown we all should be talking about.

Previous Article
Andre Dickens at the State of the City: ‘My vision is moving Atlanta forward together’
Next Article
Ukraine Crisis Response