The Varsity celebrates 90th anniversary – looks to the future 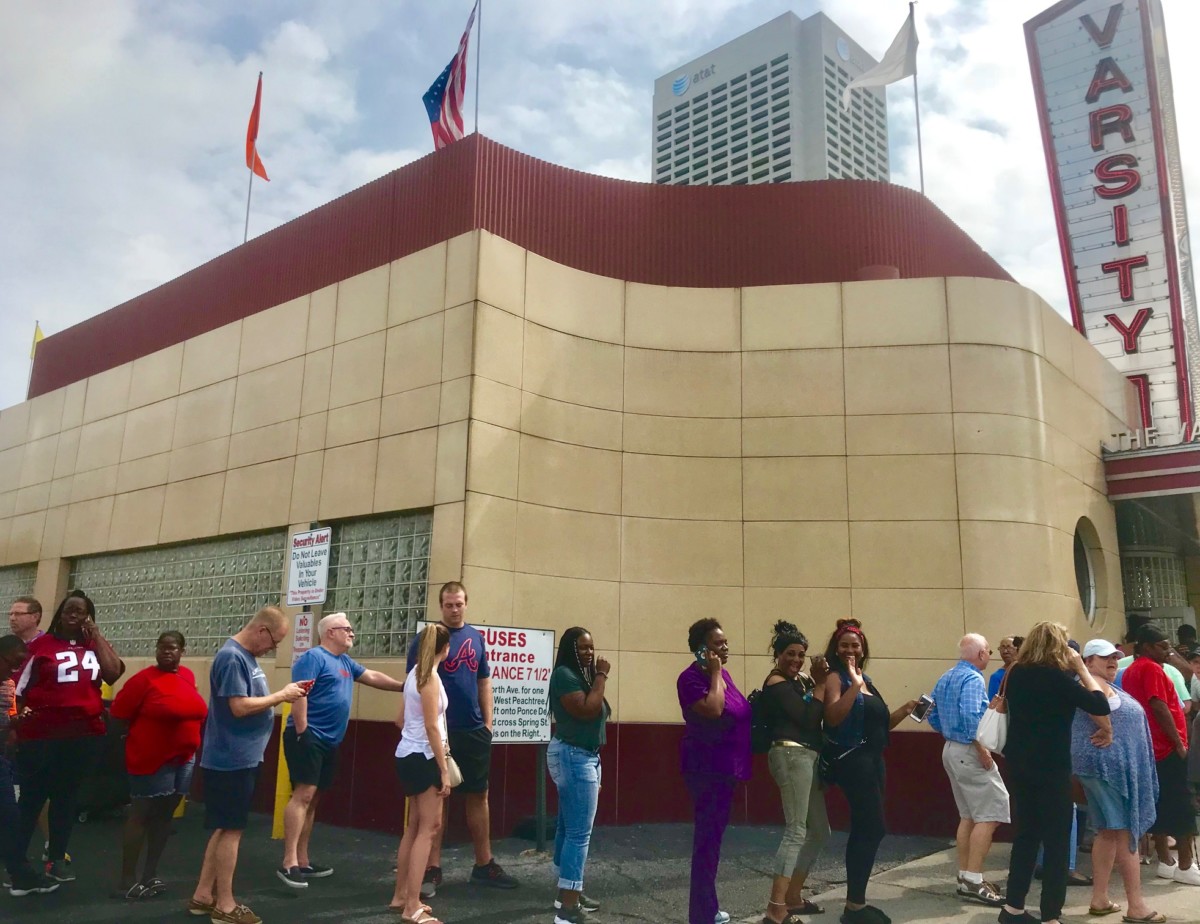 The Varsity on Saturday enjoyed what had to be its busiest day in its 90-year history. That’s when the world’s first drive-in restaurant, at North Avenue and Spring Street, celebrated its anniversary with all menu items priced at 90 cents.

Several lines wrapped around the building and down the block – as people waiting more than hour in the sun to get their chili dogs, cheese burgers, onion rings and Frosted Oranges.

(For a photo retrospective of the Varsity’s 90th anniversary celebration, please check out Kelly Jordan’s Atlanta Events this week). 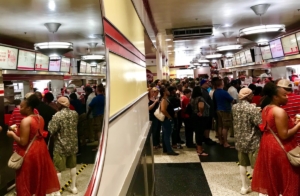 “Whaddya have?” Customers line up to buy 90 cent menu items on the Varsity’s 90th anniversary (Photo by Kelly Jordan)

Nancy Simms was overwhelmed by the public’s response – fighting back tears on a couple of occasions on Saturday.

“I’m very emotional,” said Simms, who has been the Varsity’s CEO since 1983 officials. “This is a great turnout we’ve had today. I know it would be busy, but I had no idea it would be this busy. I’m so grateful to the people of Atlanta who have loved us and kept us in business for 90 years.”

Simms stood next to her son, Gordon Muir, who serves as the Varsity’s president. Her father, Frank Gordy, founded the famous drive-in restaurant until he fell ill with emphysema. That’s when her mother told her she needed to run the business. One associate predicted that she wouldn’t last two weeks.

Thirty-five years later, it seems as though the whole family has a played a role to keep the Varsity in business. Simms proudly pointed to her sister-in-law, Susan Gordy, who had been in charge of the Varsity Jr. restaurants.

“Two women took over,” Simms said laughingly. She added that two of her sons and a son-in-law are “really in charge of everything.” And that now the leadership of the Varsity has shifted to the third and fourth generations. 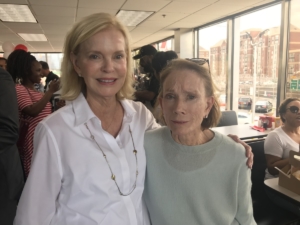 “We are in the process of planning for the future,” Simms said. “We have a family business counselor.”

The family has been fortunate to have many of its members interested in continuing the business.

“It’s amazing,” said Muir, with a bit of nostalgia. “Every day when I come to work, I see this sign and this building.”

“Thank you so much for this awesome turnout,” said Simms, who met some people who had driven up from Louisiana just for the Varsity anniversary. “It’s just so heartwarming. I see so many people whose lives have been touched by the Varsity.”

Mayor Bottoms recalled going to the Varsity with her mother and father when she was a young girl. She said she realized years later that you could walk in the Varsity rather than driving up and being served while sitting in a car.

“The Varsity has really been the back drop for us,” Bottoms said. “Going to the Varsity really was a welcome to Atlanta moment.” 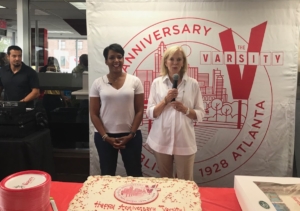 The restaurant’s history was on full display – including photos of the Varsity throughout the years – dating back to when it opened in 1928.

“We are so grateful to be part of the history and tradition of Atlanta,” Simms said. “I’m so glad of our decision to remain a family business and remain in Atlanta. It’s like the Varsity has a life of its own.”

Back in 1989, the City of Atlanta proposed designating the Varsity an historic landmark – a move Simms and her family opposed. Their position hasn’t changed nearly 30 years later – although they clearly relished the Varsity’s 90-year history.

“The property is too valuable,” Simms said of the Varsity and its acres of surface parking and a parking deck. Given the increased value of Midtown real estate, the Varsity could become a redevelopment opportunity. “I would hope any new development would keep the Varsity as part of it.”

A personal note: I grew up three blocks from the Varsity, and it sealed a place in my memory. Every day, I would take the public bus to Spring Street Elementary School, which would drop me off at West Peachtree Street and North Avenue. Getting an ice cream cone on my way home was a most pleasant way to cap my day. Also, we didn’t have a television until I was 13 years old. So being able to watch television in one of the many Varsity rooms was an extra special treat. In those days, Atlanta was such a different place – a modest Southern town where going to the Varsity was an adventure. Visiting with Nancy Simms and her children, grand-children and other relatives only reinforced that family feel we experience every time we walk in the door. 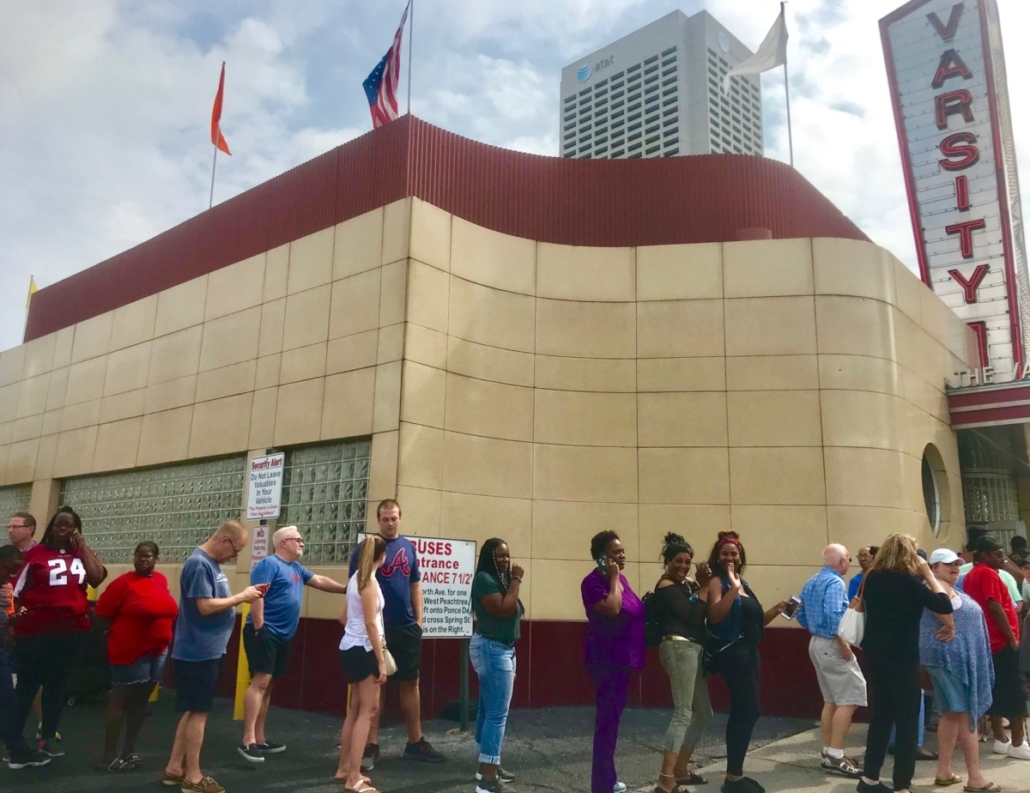 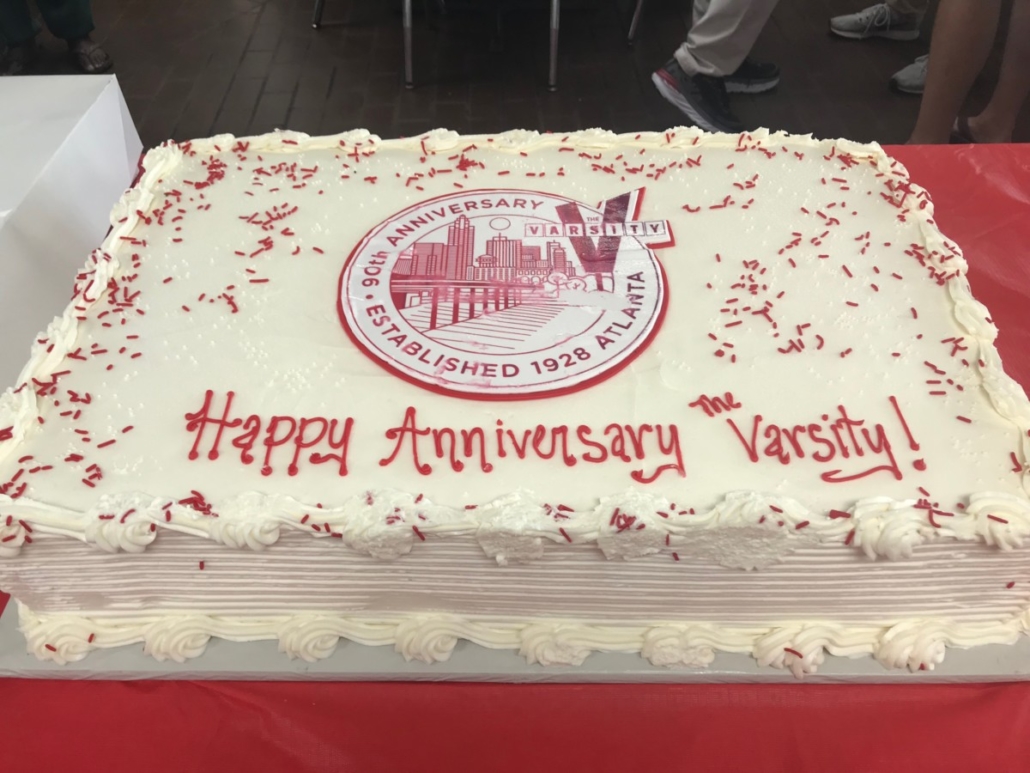 Birthday cake for the Varsity (Photo by Maria Saporta) 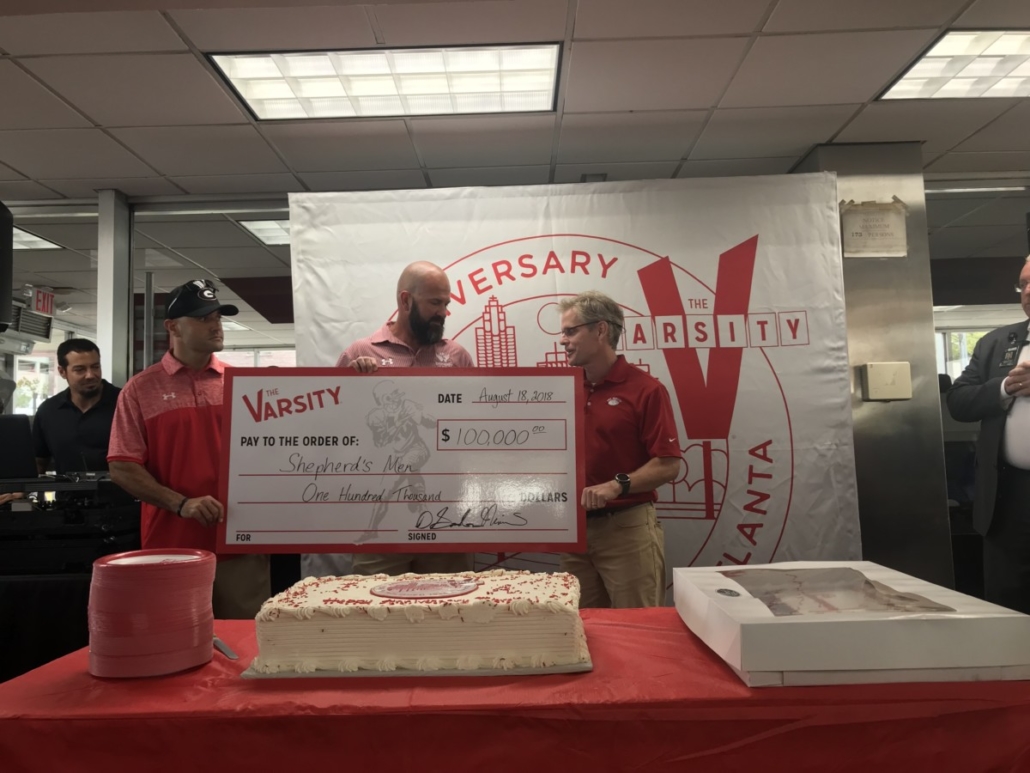 Varsity President Gordon Muir presents a $100,000 mega-check to Travis Ellis of the Shepherd’s Men, which works with veterans with physical and mental illnesses. Every day, an average of 22 U.S. veterans commit suicide (Photo by Maria Saporta) 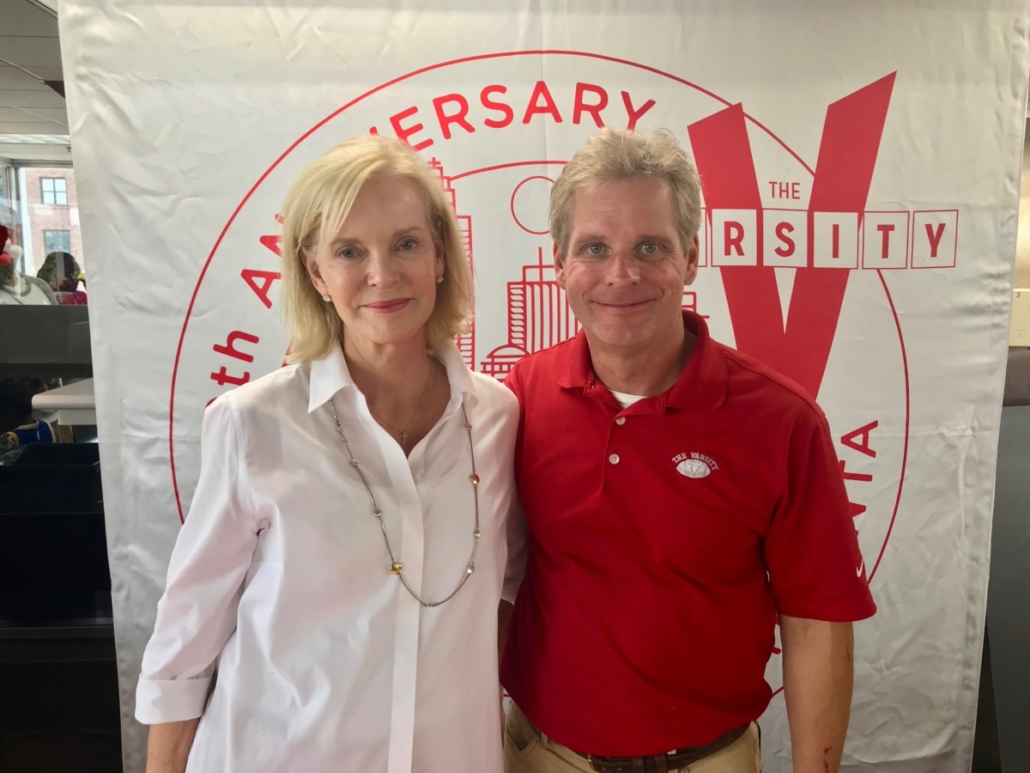 Previous Article
Georgia State Has Record Freshman Class, Increase In Academic Quality, for Fall 2018
Next Article
He was only doing his job