The Week That Was: Georgia’s historic Senate wins overshadowed by insurrection at the U.S. Capitol 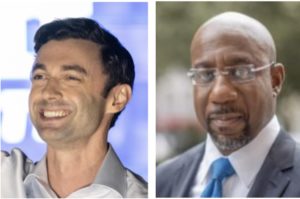 Raphael Warnock and Jon Ossoff’s wins were overshadowed by an insurrection at the U.S Capitol.

Historic U.S. Senate wins in Georgia were overshadowed by an insurrection involving violent Trump supporters, including some from Georgia.

The FBI is asking for help identifying others who participated in Wednesday’s attack that resulted in at least four deaths as demonstrators stormed the U.S House chambers to attack representatives.

The violent siege came less than 24 hours after Georgia held its historic U.S. Senate runoff races. The state has been on a significant election season these past few months. In November, the state’s electoral college votes went to Joe Biden, the first time the state had voted for a Democrat since 1994.

Wednesday, Jan. 6 started calmly. Warnock made the talk show rounds appearing on “The View” after his win, telling a warming story about his mother. The Ossoff-Perdue race was yet to be called.

But their wins were quickly overshadowed by reports of an armed, violent mob of Trump supporters storming the U.S. Capitol with the intent to attack House representatives as they certified the electoral college votes for President-Elect Joe Biden.

Reports later pointed to a speech lame-duck President Donald Trump made inciting rioters to charge the Capitol. Though he later told them to go home, Trump praised their actions.

In the days since, a resolution has been drafted by the U.S. House of Representatives to impeach Trump a second time in an attempt to remove him from office.

There has also been discussion of invoking the 25th Amendment, which would require Vice President Mike Pence to get the majority of Trump’s cabinet to agree he’s unfit to run the country.

According to CNN, Trump could contest the decision with a letter to Congress, forcing Pence and the cabinet to dispute the letter. Congress would then need to vote and have a supermajority to decide to remove Trump from office.

The U.S. House could vote on the impeachment as early as Wednesday.