‘The Wife’ explores role of the woman behind the man 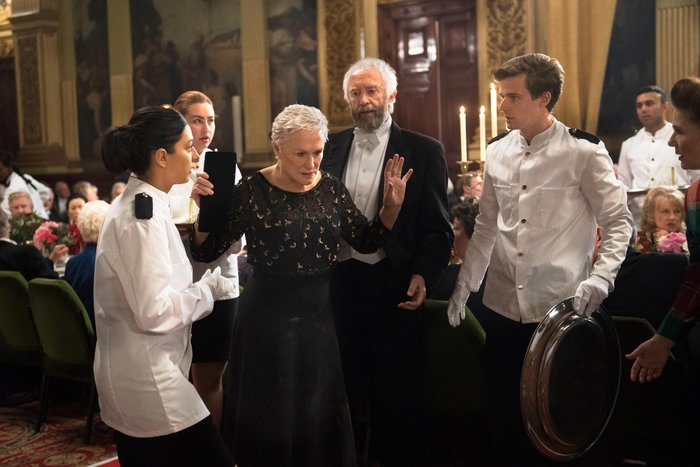 A scene from "The Wife"

He is a world-famous novelist. His life is all about lectures, conferences and picking up prestigious awards.

She is his wife. Her life is all about…well…him.

But appearances can be deceiving, as we learn a bit too ham-handedly in ”The Wife,” based on Meg Wolitzer’s far more caustic, socially observant 2003 novel. 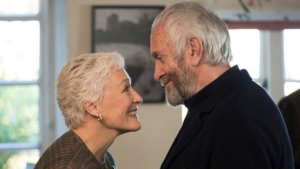 Set in the early 1990s, the film begins with the news that Joe Castleman (Jonathan Pryce) has just received the Nobel Prize for literature. Though they’ve been anticipating a win, the good news has Joe and Joan (Glenn Close) holding hands and jumping up and down on their bed together, trilling “I won the Nobel!”

The accuracy of that proclamation is the not-so-subtle “secret” at the heart of this well-acted and literate dissection of a marriage that’s a lot less perfect than it would first appear.

Most of the movie is devoted to their trip to Sweden to accept the award.  He is treated with awe; she with polite, albeit well-meaning, condescension. Would she like to join the other spouses (read, wives) on a shopping trip or a beauty treatment at the nearby spa?

No one seems to get that she’s still on the clock. Tending to Joe – adulterous, egotistical Joe – is a fulltime job.  When she does go out on her own, she must first make sure he has his pills, his spare glasses, his watch set to go off to remind him to take those pills. 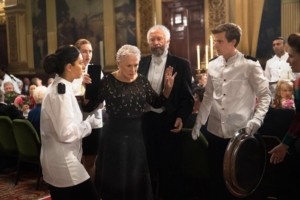 The movie also flashes back to their early years together – how they met at Smith where he (Harry Lloyd, famously golden-crowned in “Game of Thrones”) taught literature and she (Annie Starke, Close’s real-life daughter and quite good) was his bright sexy student. A married man with a newborn, he initially seems the predator. What are you doing Saturday night, he asks flirtatiously.

Turns out, he needs a baby sitter, not a date. Turns out, she knows what she wants when she sees it.

Turns out both are would-be writers, but her career veers into more traditional territory (wife, mother, homemaker) while his takes off. Were her ambitions quashed by the times? Or were they her choice? Or did she actually make a choice?

“The Wife” is at its best when it’s at its spikey-est. In one flashback, a Smith alum (Elizabeth McGovern) bitterly advises Joan and her fellow undergrads not to dream about writing careers. “Don’t even think you can get their attention,” she says of the men in the publishing hierarchy who “decide who should be put up on a pedestal.”

In the era of MeToo/Time’sUp, the themes “The Wife” is trying to explore are as relevant as ever. But it’s a bit like watching the 1967 Oscar-winner, “Guess Who’s Coming To Dinner?” about an interracial marriage. By the time it reached theaters, you wondered, don’t people already know this?  Don’t people already know what ‘The Wife” is getting at?  Are we truly supposed to be surprised or – God help us – enlightened? 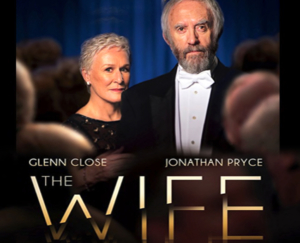 What the film lacks most is a sense of humor.  A lighter touch. Or, perhaps more to the point, a sense that the audience is with it and maybe even a bit ahead of it.

That’s not to say it isn’t enjoyable or that, geez, female trouble as we once knew it has been all taken care of.  Plus, the performances are pure pleasure – especially Pryce, preening and puffed-up.

But there’s something off here, something that suggests the original material is more nuanced – livelier? –  than what we’ve been given. Or that, more ominously, that we’ve been denied the opportunity to fully contemplate Joan’s own complicity in how her life has gone.

Somehow, “The Wife” is never as thrillingly groundbreaking as it seems to think it is. That’s not a crime. But it is something of a disappointment.

Previous Article
Alabama gardener, possibly akin to Celestine Sibley, to speak at Atlanta History Center
Next Article
Making your intentions known ensures your estate will leave the legacy you wish