"The Woman in the Window" movie poster

The ghost of Alfred Hitchcock hovers over “The Woman in the Window” the way Grace Kelly hovers over a laid-up Jimmy Stewart in “Rear Window.” Only, there’s no Princess-Grace-to-be on hand (or a Hitchcock, for that matter) to help Amy Adams through this clumsy would-be thriller.

Not that Adams doesn’t try. As Anna Fox, a fearful agoraphobic roaming the darkened chic of her uptown townhouse, she does enough acting for Stewart and Kelly combined. But not even someone as skilled as Adams can put over a script that flips fitfully from psychological study to slasher flick. 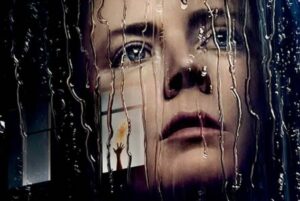 “The Woman in the Window” movie poster

Anna hasn’t left her house in 10 months (an interesting pandemic vibe).  Her only interactions are with the guy who delivers the groceries and her sexy but somehow threatening basement boarder (Wyatt Rusell). Oh, and her fluffy white Persian cat, a plot device that, cat-lovers will be pleased to hear, doesn’t end up dead.

However, the film’s main plot device is Julianne Moore as Jane Russell, a fluffy vivacious blonde whose family has moved in across the street. The two women share a cheerfully boozy night together and then…well, something happens. Jane disappears and Anna, whose life revolves around spying on her neighbors, is convinced she’s been murdered.

And perhaps she has. Or perhaps Anna is just nuts, which is what the detective (Brian Tyree Henry) summoned by her 911 call clearly thinks. Especially when a pissed-off Mr. Russell (Gary Oldman) turns up with his version of the Missus (Jennifer Jason Leigh).

Maybe that’s an inherent fault in A. J. Finn’s best-seller, but a lot of what happens doesn’t ring true, beginning with Anna’s willingness to invite a total stranger – in this case, Jane’s fretful teenage son (Fred Hechinger) – inside for an extended visit. 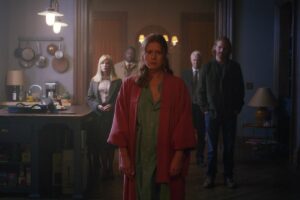 A scene from “The Woman in the Window”

Frazzled and frumpy, Adams heroically commits herself to Anna’s every psychotic tick, whether she’s sloppily mixing anti-depressants and red wine or trying to figure out what happened to her new best friend. Oldman, whom Joe Wright directed to a Best Actor Oscar for “Darkest Hour,” doesn’t have much to do besides be angry, and Leigh doesn’t even get to do that.

So, until it’s irksome overwrought finale, the movie is pretty much a one-woman show. When that woman is someone as talented as Adams, one hopes that somehow the whole mess will pull itself together.

Alas, not so much.  Or not enough. Moore, all twinkly laughter and booze-buddy fun, gets away the cleanest. But that’s the built-in protection of extended cameos. You do your thing, get your face in the trailer, then move on.

In the case of “The Woman in the Window, follow her example. Just move on.

“The Woman in the Window” is available to view on Netflix.