The world according to Ted 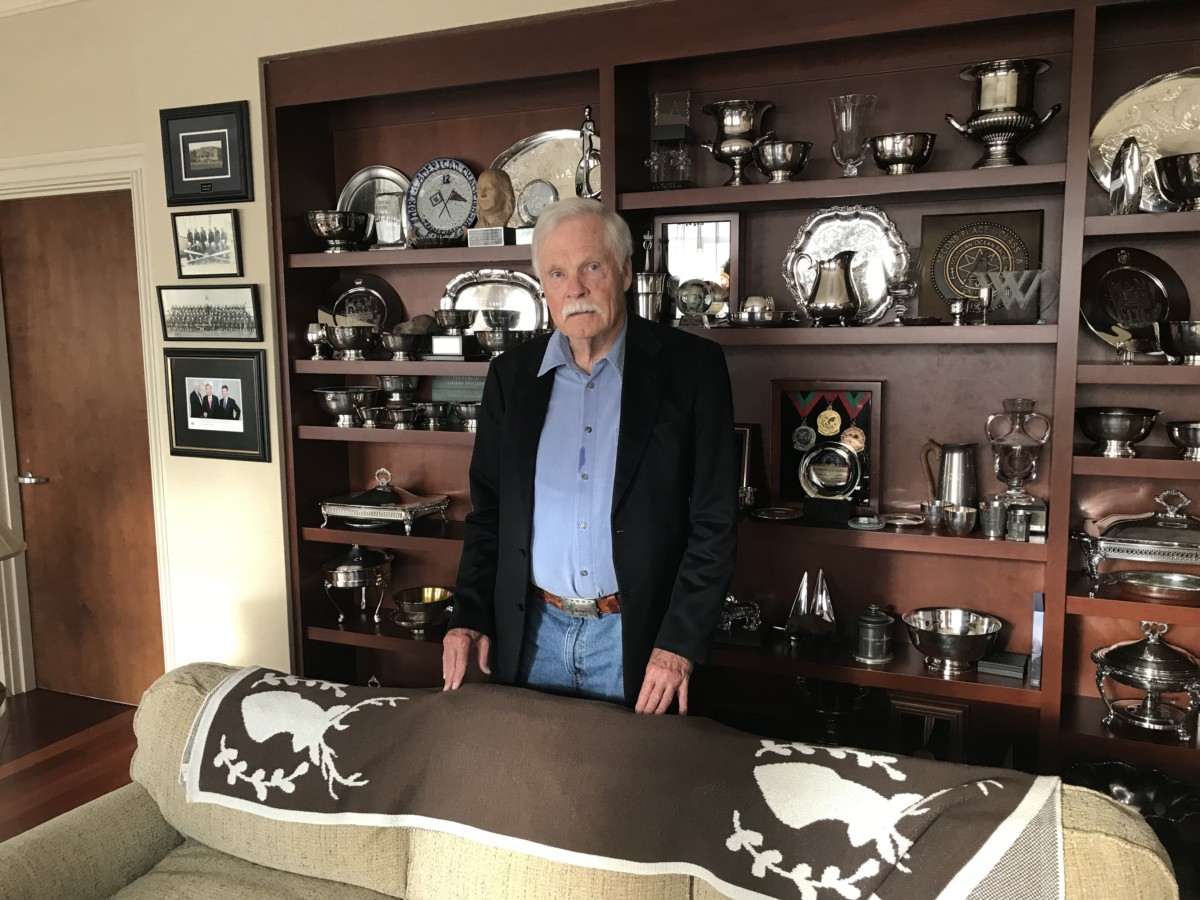 By Maria Saporta
As published in the Atlanta Business Chronicle on Nov. 16, 2018

A subdued Ted Turner sat in his office on a cloudy and drizzly Election Day to talk about his place in life on the eve of turning 80 years old on Nov. 19.

An intimate birthday celebration in Turner’s honor will be held Nov. 17 for family, close friends and colleagues from around the country to toast a man who is a legend in his own time.

Turner agreed to an exclusive one-hour interview with the Atlanta Business Chronicle to reflect on his life and the prospect of turning 80.

Turner then was reminded of a comment he made in 2002 during an interview. 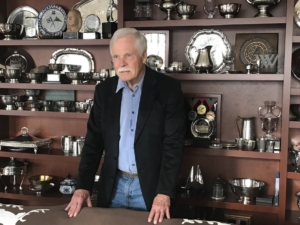 “Life is like a grade-B movie. You don’t want to get up and leave in the middle, but you wouldn’t want to sit through it again,” Turner said at that time.

“I don’t remember that,” said Turner, who then added that he can’t go back in time. “I got here anyway. One thing I tried in my life, I tried to do what I could do.”

Turner’s accomplishments dwarf those of any mortal human being. He was a world champion competitive sailor winning America’s Cup in 1977. He transformed the television and broadcast industry by first running a billboard business and then buying a small UHF television station in Atlanta. Turner was able to see beyond the horizon and understand how combining satellite communications with television, he turned Channel 17 into the Super Station. That launched Turner Broadcasting System into becoming a major national media company.

Eventually Turner started the first 24-hour cable news network — CNN — as well as a host of other cable channels, like TNT, Turner Classic Movies and the Cartoon Network. He bought the Atlanta Hawks and the Atlanta Braves, which provided content for his networks. He also bought World Championship Wrestling in 1988.

But there was also the Turner who wanted to “make the world a better place” for all. After the United States boycotted the Moscow Olympics in 1980, Turner launched the Goodwill Games — a sports competition aimed at bringing the United States, the Soviet Union and the rest of the world closer together. The Goodwill Games lasted for 20 years. Through CNN, he opened up the lines of communications with U.S. adversaries, even meeting with Cuba’s revolutionary leader Fidel Castro in 1998 during a visit to CNN’s bureau in Havana.

That same year, Turner announced a $1 billion pledge to start the UN Foundation as a way to help the then-beleaguered United Nations. So in addition to building a media empire, Turner became a global philanthropist. He launched the Nuclear Threat Initiative (NTI) to reduce the threat of weapons of mass destruction around the world. He started the Turner Foundation to invest in environmental causes.

Turner also began buying land — millions of acres — partly to help protect the natural environment as well as endangered species, including the bison. With about 50,000 bison in his herd, Turner founded Ted’s Montana Grill, a national chain of restaurants that features bison on the menu, as a way to preserve the species.

“You could make a point that they are still endangered. We are all endangered,” said Turner, who talked about the overuse of the planet. “That’s what worries me the most. We are still adding a billion people every few years, and the world is having a hard time supporting all of them. We have got more and more people using more and more stuff.”

Over the decades, Turner has been one of Atlanta’s most influential business and philanthropic leaders. And he certainly was one of its most colorful. His marriage to actress Jane Fonda in 1991 brought some Hollywood flair to Atlanta, and they jointly supported each other’s causes — from preventing teenage pregnancy to spotlighting overpopulation on Planet Earth. 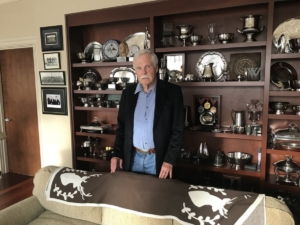 “I concentrated on making the world a better place. I think it was a pretty successful life,” Turner said. “I’m happy with it. And I’m still doing it.”

Turner was asked about the current political environment, but he was reluctant to name names or point fingers.

Asked about the UN Foundation, Turner said: “It’s doing a good job. It could always do better. But it’s done well. I’m happy with that.”

About the most political comment Turner made was when he complained about the United States pulling out of the multilateral Paris Climate Accord in 2017. But he quickly added that “individual states are picking up the slack” by adopting its principles.

He then mentioned that he had just read an encouraging newspaper article that said the hole in the ozone layer was getting smaller.

“We are doing better than we thought we were,” he said.

Turner has always offered a sometimes contradictory mix of optimism and realism. And he has taken on much of the world’s problems as his own.

Over the years, Turner estimated that he has given away about $1.5 billion.

“I’m still doing a lot of philanthropy,” said Turner, who is worth about $2.2 billion, according to Forbes magazine.

Then Turner expressed comfort that his five children and 14 grandchildren are involved in various initiatives and are carrying on his legacy.

“It’s very satisfying and energizing to see my family following in my footsteps,” Turner said. “There’s a lot to be done, and it takes a lot of people to do it.”

Although Turner has owned several homes around the country and abroad, he has had a special relationship with Atlanta.

“Atlanta is my home, and I’m happy to be here,” Turner said. “It’s been my base for a long time.”

He did complain about the Atlanta Braves moving from the former Turner Field to Cobb County.

“I never would have moved the Braves out of Atlanta as long as I was associated with the team,” Turner said. “I think it was wrong to move.”

When asked about his greatest accomplishments, Turner said: “I think CNN and the Goodwill Games were two of the most important things I did.”

His greatest regret? Selling Turner Broadcasting System to Time Warner, which then made a disastrous deal with AOL.

“I wouldn’t have sold it to Time Warner if I had known what was going to happen,” Turner said. “I got pushed out. That’s my biggest regret. I survived it, but it was tough.”

Then he quickly added: “I’ve had a lot of good times.”

Turner is an outdoorsman who loves to fly fish — catching the fish and letting them go. He’s been known to pick up trash when he takes walks downtown.

“It doesn’t seem like there’s as much trash as there used to be,” he remarked.

At one point, Turner brought up the fact that he has Lewy Body Disease, the second most common type of progressive memory loss after Alzheimer’s disease. Turner was diagnosed early on with a mild case of the disease, which is progressing at a slow pace.

“It’s hard having dementia,” Turner volunteered. “It’s hard, but I do my best to carry on.”

Turner, who had been called the “Mouth of the South,” is now a man of few words. At times he struggles to find the right thing to say, but he has found a way to cope.

Then defying all odds, he flawlessly recited a passage of the poem “Horatius at the Bridge” by Thomas Babington Macaulay.

Despite his dementia and his upcoming birthday, Turner is still able to make fun of himself. Turner has been known to say that his gravestone would be engraved with the words: “I have nothing left to say.”

“That was a joke,” Turner said. “A sense of humor helps you get through life.”