Somehow, they pulled it off.

At the YWCA’s Salute to Achievement awards on May 18, a surprise grand finale tribute was given to Sharmen Gowens, CEO of the YWCA of Greater Atlanta.

“You are this year’s Woman of Achievement!” proclaimed Tad Hutcheson, vice president of community and public affairs at Delta Air Lines who is the only “Y’s Man” in the YWCA’s Academy.

Every year, the YWCA inducts a group of women into the Academy and names a Woman of the Year. But the program for this year’s scaled back event – held in person at Georgia Power’s headquarters – did not list a woman of the year award. 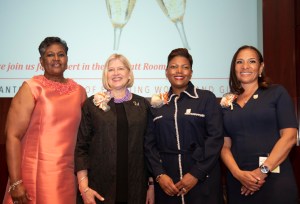 Sharmen Gowens, Lee Zak, Nikki Clifton and Chloe Barzey after being inducted into the YWCA Academy. Nancy Quan was unable to attend (Photo by Joann Vitelli courtesy of the YWCA)

Gowens, who has announced she will step down by the end of the year, was so stunned that her mouth remained open for a full minute when she handed the award.

After a few moments, she collected her thoughts: “I love this work,” she said. “What I really love is hearing stories of success like Sherry’s. This is indeed an honor I will never forget.”

Gowens was referring to Sherry Bellille, who was a graduate of the YWCA’s Digital Academy. Bellille said how “life-changing” the pilot program was for her. The native of the Virgin Islands who attended Morris Brown College is a single mother of four who has been working as a waitress at the Waffle House.” She was able to get a new job, even though she’s still working part-time at the Waffle House to make ends meet.

“I know eventually I will be able to leave public housing,” said Bellille, adding she “can’t wait” for a renovated Phyllis Wheatley YWCA on the Westside to reopen, saying it will be a “home away from home.”

Gowens said the renovation of the Phyllis Wheatley center will expand the YWCA’s footprint in Atlanta.

“Our mission is to empower women and eliminate racism,” she said. “It’s been a while since we’ve had a hub in the actual community that needs us the most.”

In addition to Gowens, the YWCA inducted four new women into the Academy: 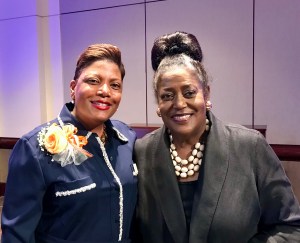 Nikki Clifton of UPS stands with her mentor, Coca-Cola legend Ingrid Saunders Jones, at the YWCA Salute to Women of Achievement (Photo by Maria Saporta)

One of the more tender moments during the panel discussion was when Gowens asked the panel of women what advice they would give her 8-year-old grand-daughter Audrey, who was in the audience.

The common theme they shared was to follow her dreams and look to the role models in her life.

“When I was growing up, Ingrid was my role model.” From Saunders, she learned to “believe in yourself and pull somebody up along the way.”

Previous Article
Do they have what they need?
Next Article
Emory’s AI.Humanity Initiative Aims to Shape the Future of Artificial Intelligence to Serve Society