Lin-Manuel Miranda (yes, the guy who gave us a little something called “Hamilton”) makes his feature directorial debut with “Tick, Tick…Boom!,” an exuberant and heartfelt celebration of all things theater.  Even the sillier and less attractive things – such as theater-geek ego and the-show-must-go-on myopia.

You may not have heard of its author, Jonathan Larson, but you probably know his show “Rent,” which, along with running for 12 years on Broadway, virtually re-invented the musical. At the very least, it updated the genre and gave it a rock beat. 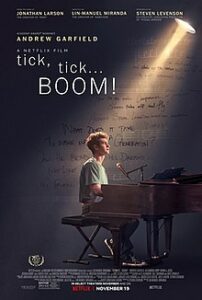 A poster for “Tick, Tick…Boom!”

Sadly, almost fatefully, Larson never saw his work become a worldwide success. In a tragic twist worthy of the Greeks, he died, age 35, of an aortic aneurism on the day of “Rent’s” first Off-Broadway preview.

“Tick, Tick…Boom” (unfortunate title) is Larson’s pre-“Rent” semi-autobiographical show about his early struggles to become a success before…tick, tick…boom!…he turns 30. In his eyes that will make him a has-been; instead of a writer waiting tables until his big break, he’ll be just another waiter whose hobby is writing. “Everything you’re about to see is true,” we’re told in a tongue-in-cheek voice-over. “Except for the parts Jonathan made up.”

It really doesn’t matter what was or wasn’t made up because the essence of the film is true. For some, theater is an addiction, an all-consuming way of life. Certainly, that’s true for Jonathan (a superb Andrew Garfield) who’s been working on his sci-fi musical “Superbia” for years. He may finally be getting his big break – a workshop production at Playwright’s Horizon (fair warning: if you don’t know Playwright’s Horizon or what a workshop production is, you may be less enamored of Miranda’s movie).

For Jonathan, everything else is secondary to his big day. His best friend (Robin de Jesus), a former actor who “sold out” to an advertising career, needs to talk. So does his girlfriend (Alexandra Shipp), a dancer who’s been offered a grown-up job as a member of the staff at Jacob’s Pillow. But that would mean moving to the Berkshires which, as Jonathan points out, is, like, “so far from Midtown.” 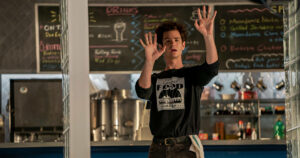 A scene from “Tick, Tick…Boom!”

“Tick, Tick…Boom!” is firmly set in the early ‘90s, when home computers were the size of border collies, people still had answering machines and the scourge of AIDS was running rampant ­– especially in the theater community where attending three funerals in one week wasn’t unusual.

Yet Miranda also sees it as a kind of golden age when a shower in the kitchen or trudging 13 blocks through the snow to do your laundry was simply part of life for a struggling theater person. In one of the movie’s most delightful numbers, Garfield and de Jesus celebrate the wonders of a regular paycheck – health benefits, a doorman building and, as “The Jeffersons” put it so memorably,”a deluxe apartment in the sky.”

But Miranda, like Larson, understands that, for an obsessed few, health benefits, etc. don’t matter. In its way, “Tick, Tick…Boom!” is as wide-eyed and wonderful as any traditional Broadway ingénue. Simply put, the film is a love letter – to Larson, to New York, to a life in the theater.

No wonder the first sound we hear is applause.

“Tick, Tick…Boom!” is in theaters and it is available on demand.